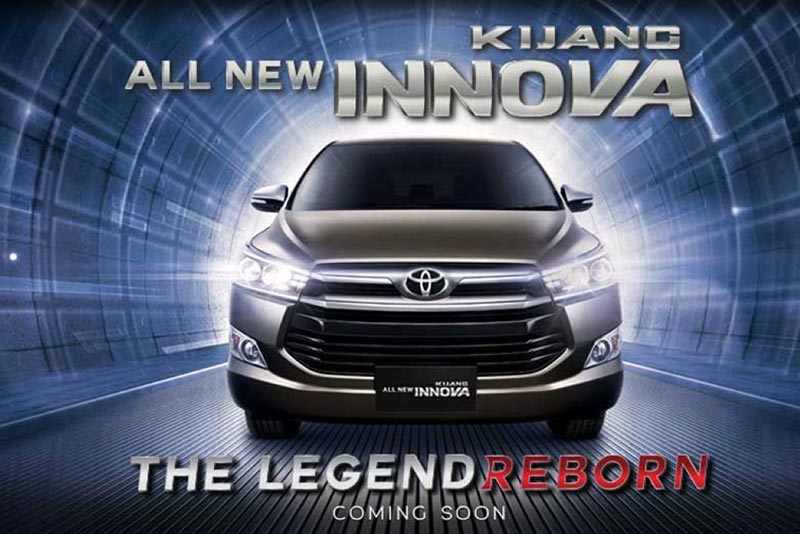 The 2nd generation Toyota Innova is the most anticipated cars from the past couple of years. The new generation of the MPV(Multi Purpose Vehicle) is going to make its very first public debut at the Jakarta Motor Show starting from November 23rd. Toyota, the Japanese automobile manufacturer has also released a teaser of sorts and has tweeted an image of the front fascia of the MPV. The picture of all new Toyota Innova shows some of the significant changes which have been done on the front of the vehicle.

Once could notice that the headlights, grille and bumper of the new Toyota Innova are completely new. The fog lamps of the Innova car have also got a major design tweaks. The grille of 2016 Toyota Innova is bigger in size and the headlamps of the car are double barrel units. The side profile of new Innova and rear fascia have not been revealed yet. clear that the entire vehicle will have nothing in common with the outgoing generation. When it comes to interiors and features of the mew Innova, it is going to be a very massive improvement over its predecessor.

The new 2016 Toyota Innova is available in three different trims – G, V and Q. The India-bound Innova model is expected to come with 2.4-litre diesel engine that is capable of churning out a maximum power of 147 hp and delivers a peak torque of 360 Nm. Toyota Innova is offered in 6-speed manual transmission and even a 6-speed automatic gearbox. This particular engine would also be offered in the next generation Toyota Fortuner. In the International markets, the new Innova gets a petrol engine.

Toyota is expected to showcase the next generation Innova 2016 in India at the 2016 Auto Expo and shall hit the Indian roads only in end of 2016 or early 2017. The current generation Toyota Innova is a hot-seller throughout its life span and shall remain a favourite with cabbies and private buyers. Even after the launch of the new Innova 2016 model, the present model will be available in certain variants, catering to specific commercial market only.