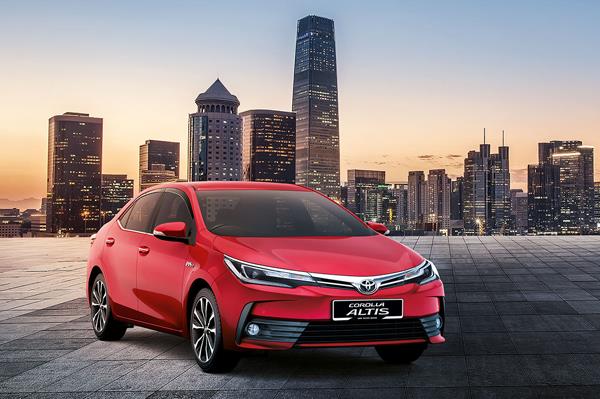 The upcoming Corolla Altis will be getting a much sharper front fascia and gets entirely different styling. The basic profile of Corolla Altis shall remain unchanged. The front design of Altis sees an inspiration from Toyota’s latest design language with sharper looks, Thanks to sleeker headlamps, a slimmer grille and brand new front bumper. There are also few minor changes at the rear of the car like trim bits and new all-LED tail-lamps.

The interiors of 2017 Corolla Altis gets an enhanced centre console with new larger touchscreen, revised air condition controls and new circular side vents.

Talking about the engines, the facelifted Toyota Corolla Altis will be powered by similar engine as that of its existing model – The 140hp 1.8-litre petrol engine and 88hp 1.4-litre diesel engine.

The 2017 Corolla Altis will be getting a larger 7 inch Toyota touchscreen unit on its top trim versions with new LED tail lamps. We are also not sure if  all-LED headlamps will be offered in latest version of Corolla in India – instead it might be getting conventional xenon light and daytime-running LED arrangement.

The 2017 Toyota Corolla Altis when launched in India will be priced between INR 13.5 lakhs to 18.5 lakhs (ex-showroom, Delhi.