by PR Bot
in Ather, Bikes
0 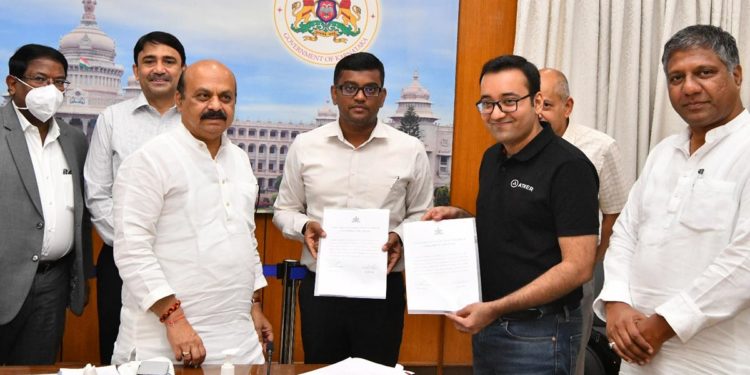 Ather Energy, India’s leading electric scooter manufacturer, has signed an MoU with ESCOMs (Electric Supply Companies) of Karnataka to jointly establish fast charging for two-wheelers in 1000 locations in the state. The collaboration aims at creating a favorable ecosystem for EVs in the state and increasing adoption.

As part of the MoU, the state-owned power transmission and distribution company ESCOM will be the nodal agency to provide all support to the implementing agency. All govt. agencies would coordinate with ESCOMs to share their available spaces for charging stations.

“We are excited to partner with the Govt. of Karnataka and thankful to the Hon. CM of Karnataka Mr. Basavaraj Bommai for his speed, support and commitment to set-up a statewide network of charging stations. A robust charging network is one of the most important factors in accelerating EV adoption. Karnataka has been at the forefront of EVs and this will further the lead.”

Since its inception, Ather Energy has invested in building a fast-charging network – Ather Grid, and has also released its IP for the charging connector to all OEMs. The Ather Grid has been designed and made in India completely by Ather Energy. In Karnataka, Ather has installed 58 fast charging stations and around 300 fast-charging Ather Grid Points across 28 cities in the country. In the next 3 years, Ather plans to install 5,000 fast chargers across India, and the MoU with the Karnataka government is the first step towards the goal.

The Government of Karnataka over the years has taken several initiatives to boost the EV industry like waiving off road tax for electric two-wheelers and providing subsidies and incentives to component manufacturers. This has seen tremendous growth in demand which resulted in Ather Energy opening 4 showrooms across Karnataka – Bangalore (2), Mysore, and Hubli.

Ather Energy has expanded its retail footprint across key cities in India and is currently present in 24 cities with 29 retail stores. Over the next three years, Ather plans to increase its annual production capacity to one million scooters from four lakhs by the end of 2022, develop new products and increase its network to 600 stores.