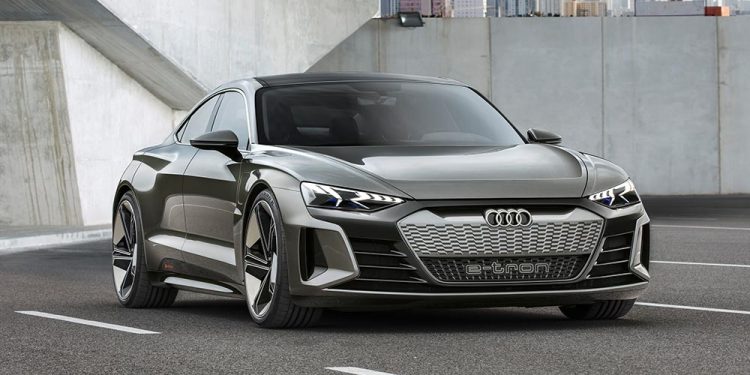 Audi, The brand with the four rings is presenting one of the stars of the 2018 Auto Show in the movie capital Los Angeles. With the electric powered Audi e-tron GT concept a four-door coupé is making its debut as a show car. The volume-production counterpart is set to follow in around two years. 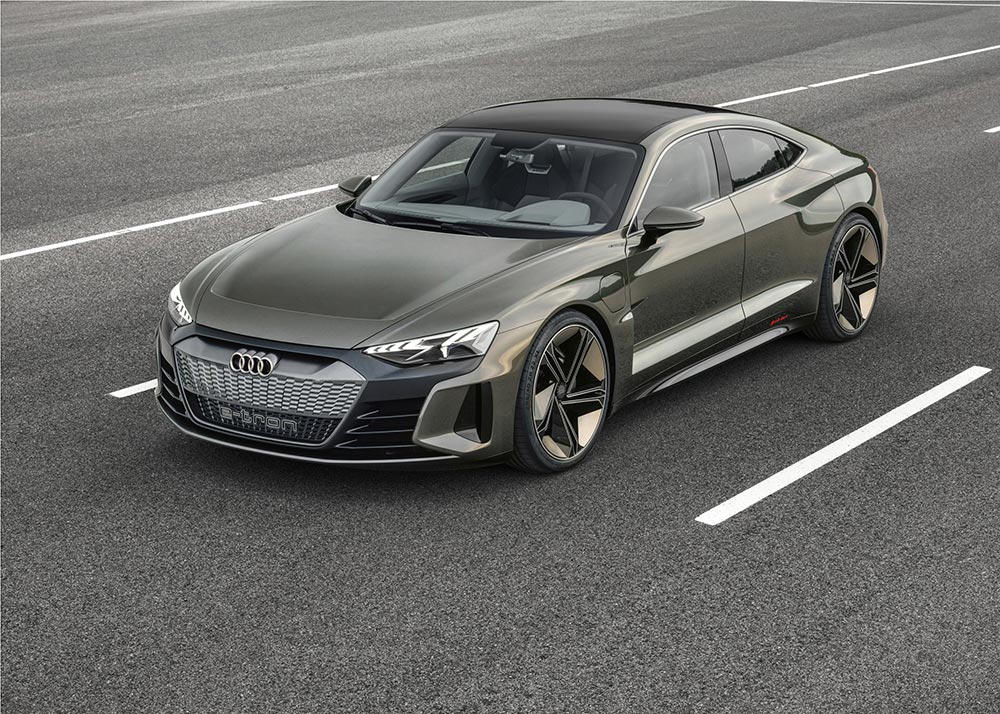 The next electric Audi is being launched, following in the footsteps of the Audi e-tron SUV and the Audi e-tron Sportback slated for 2019. This time with a flat-floor architecture that provides for exciting proportions and a low center of gravity. 434 kW (590 hp) ensure performance fit for a sports car. The torque is transferred to the wheels via the quattro permanent all-wheel drive with torque vectoring, as you would expect for such a dynamic Audi. The performance subsidiary Audi Sport GmbH is responsible for subsequently transforming the car into a volume-production model.

Inspiration drawn from the wind tunnel: design and body

Flat, wide and with a long wheelbase – those are the proportions of a classic Gran Turismo. And the Audi e-tron GT concept reflects these with its 4.96-meter (16.3 ft) length, 1.96-meter (6.4 ft) width and 1.38-meter (4.5 ft) height. The lightweight body of the four-door coupé is manufactured using a multi-material construction. Here you have a roof section made from carbon along with numerous aluminum components and supporting elements made from high- strength steel. The technology for this automobile was developed in close collaboration with Porsche. Design and character are packed full of unmistakable Audi DNA.

The gently sloping roofline of the e-tron GT concept that extends well into the rear echoes the Sportback layout that is the hallmark of the brand. This is however clearly taken forward into the future, pointing the way to the next evolutionary stage of the Audi design language. The cabin that tapers strongly toward the rear stands out compared with current Audi models. Wheel arches and shoulders are sculpted emphatically and, together with the flat floor that is unusual for an electric vehicle, visually underlines the low center of gravity and the dynamic potential of the Audi e-tron GT concept.

The broad lines and the numerous functional elements of the body as well as the air vents of the wheel arches and the solid rear diffuser emphasize its origins in the wind tunnel. A low drag coefficient that reduces fuel consumption and the low uplift visually characterize the design.

The sill area between the wheel arches has been drawn way outwards, creating a distinctive contrast with the cabin. The sill draws the eye to the underfloor area where the battery and thus the energy center of the Audi e-tron GT concept are located. The design of the wheels with their five twin spokes is also visibly aligned to their function. Their dynamic design provides optimum ventilation of the brake disks while also reducing drag. Shod with 285/30 size tires, the 22-inch wheels also make a clear statement when seen from the side.

The hallmark Audi Singleframe is located in the center of the front section. Compared with the two e-tron SUVs its architecture is much more horizontal. The top half comes with a cover painted in body color. Its surface structure is reminiscent of the typical honeycomb pattern of the grille on the Audi RS models – a visual signal which characterizes the Audi e-tron GT concept as a future product of Audi Sport GmbH.
Together with the targeted airflow of the body, large air inlets in the front effectively cool the assemblies, battery and brakes. The hood with its airflow on the surface echoes the brand’s two latest show cars, the Aicon and the PB18 e-tron. It is designed in such a way that the airflow hugs the body, thus reducing undesired swirl. 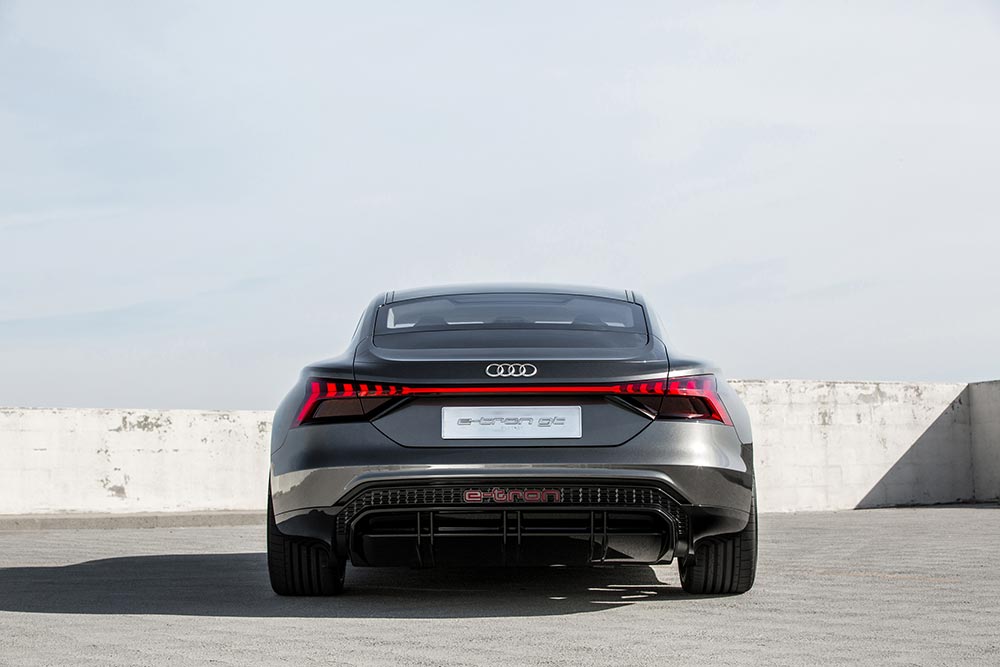 The arrow-shaped front section also emphasizes the matrix LED headlights with laser high beam, underscoring the dynamic presence of the Audi e-tron GT concept even while stationary. As already seen with the brand’s current Visions vehicles, the light is also animated here and welcomes the driver with a short function sequence, the wave of light that extends horizontally: a new visual signature that is set to find its way into volume production in future.

A light strip runs across the entire width of the rear. This strip dissipates at the outer edges, in the actual lighting units, into individual wedge-shaped LED segments. This architecture links the e-tron GT with the volume-production SUV e-tron, making both instantly recognizable even in the dark as Audi electric automobiles.

The new exterior color kinetic dust – a warm, dark color akin to titanium – comes across as practical without being ‘technoid’ standoffish. Depending on the incidence and movement of the light, it provides significant contrast between the body surfaces. Matt, warm-tinted aluminum elements on the window slot trim and rims emphasize these effects even further.

Four doors, four seats with 2.90 meters (9.5 ft) wheelbase – in the interior the Audi e-tron GT concept provides a large dose of everyday usability, coupled with a superb quality feel. The functional center of the interior is located at the front left, visibly focused on the driver’s seat. The center console, the large touchscreen in the top section and the line from the door rail and cockpit frame the driver’s workplace, perfectly incorporate the driver ergonomically with the controls and the infotainment of the Audi e-tron GT. The center console and the freestanding instrument cluster seem to float. Light colors in the top section of the cockpit and the gradually darker gradation through to the floor area create the impression of clear width. Sport seats inspired by motor racing in both rows of seats provide optimum lateral support even while cornering at speed.

Both the screen of the central instrument and the touchscreen above the center console come with a black-panel look finish. They underscore the large, calm design of the interior with its predominantly horizontal basic architecture. Various layouts are available for the monitors to present the functions depending on the driver’s preference, including virtual instrument dials, easy-to-read navigation maps with information on the range, or various infotainment function menus. They are controlled via the touchscreen with tactile feedback.

With the concept car the designers have deliberately gone for the consistent use of sustainable materials – a clear statement of contemporary automotive design. Animal-based products are not used at all: the Audi e-tron GT concept comes with a vegan interior. Sophisticated, synthetic leather is used on the seats and other trim surfaces. Fabrics made from recycled fibers are used on the seat cushions as well as the armrests and on the center console. Microfiber material adorns the headlining and the trim of the window pillars. Even the deep-pile floor carpet is made from sustainable Econyl yarn, a recycled fiber made from used fishing nets.

With two luggage compartments, the Audi e-tron GT concept offers a great many options for a Gran Turismo. Here it makes full use of its concept advantage as an electric automobile with compact drive units. The rear with its large tailgate offers up to 450 liters (15.9 cu ft) of luggage capacity. Under the hood there is an extra 100 liters (3.5 cu ft) of capacity. 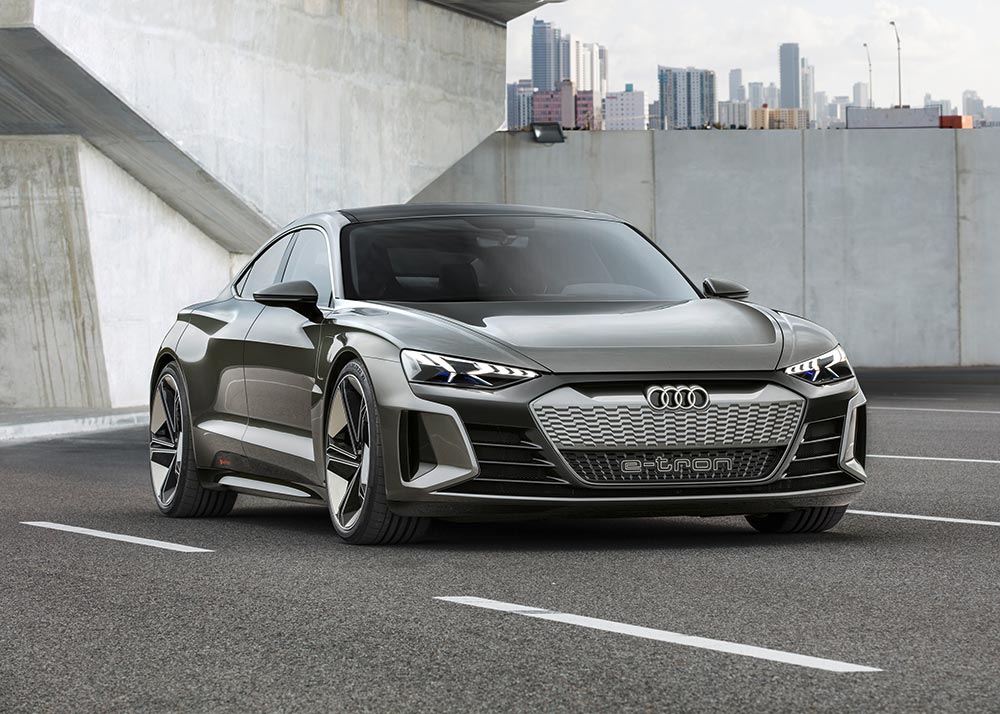 Performance and range: the drive

434 kilowatts (590 hp) system power – that is an impressive figure for the potential of the all- electric drive. Separate electric motors are fitted to the front and rear axles. In both cases these are permanently excited synchronous motors. They put down the torque onto the road via all four driven wheels – naturally the new Audi e-tron GT concept is also a genuine quattro. An electric quattro to be precise, since there is no mechanical link between the front and rear axle. The electronic control system coordinates the drive between the axles as well as between left and right wheels. That means optimum traction and just the desired amount of slip.

In future, the vehicle should accelerate from 0 to 100 km/h (0-62.1 mph) in around 3.5 seconds before going on to 200 km/h (124.3 mph) in just over 12 seconds. The top speed is regulated at 240 km/h (149.1 mph) to maximize the range. One feature that not all the competition can match is the option of fully utilizing the drive’s acceleration potential several times in succession. While elsewhere the drive is switched to overdrive for thermal considerations, the Audi e-tron GT concept can provide the driver with the full potential of both motors and the battery thanks to its sophisticated cooling strategy.

The range of the concept car will be over 400 kilometers (248.5 mi), determined according to the new WLTP standard. The required drive energy comes from a lithium-ion battery with an energy content of more than 90 kWh, which takes up the entire underfloor area between the front and rear axle with its flat design. The decisive advantage of this design is the car’s extremely low center of gravity – comparable with that of the Audi R8 – which in turn decisively benefits dynamic handling. All-wheel steering translates this into a perfect synthesis of sports car-like agility and precision, augmented by superb directional stability.

The battery in the Audi e-tron GT concept can be charged in several ways: using a cable which is connected behind the flap in the left front wing, or by means of contactless induction with Audi Wireless Charging. Here a charging pad with integral coil is installed permanently on the floor where the car is to be parked, and connected to the power supply. The alternating magnetic field induces an alternating voltage in the secondary coil fitted in the floor of the car, across the air gap. With a charging output of 11 kW the Audi e-tron GT concept can be fully charged conveniently overnight.

Wired charging is much faster as the four-door coupé is fitted with an 800-volt system. This substantially reduces charging times compared with conventional systems that are currently in use. Thus it takes around 20 minutes to recharge the battery to 80 percent of its capacity, once again providing a range of more than 320 kilometers (198.8 mi) (WLTP). The e-tron GT concept can, however, also be recharged at charging points with lower voltages, providing the driver with access to the entire charging network.

The brand with the four rings launched its electric offensive with the world premiere of the all- electric SUV Audi e-tron in September 2018. By 2025 Audi will offer twelve automobiles with all-electric drive in the most important markets worldwide and achieve roughly one-third of its sales with electrified models. The SUVs within this portfolio include the Audi e-tron and the Audi e-tron Sportback due to make its debut in 2019. In addition, there will be a range of models with classic body layout such as Avant and Sportback. The range will cover every relevant market segment from the compact to the full-size class.

The Audi e-tron GT concept show car, a highly dynamic coupé with a low floor, is debuting at the Los Angeles Auto Show 2018. The technology in this automobile was developed in collaboration with Porsche; the design and character of the e-tron GT concept are packed full of unmistakable Audi DNA. The project will be developed into volume-production models by the end of 2020. Initial deliveries will be made to customers in early 2021.

Another joint project of the development departments at Audi and Porsche is the Premium Platform Electric (PPE). It will be the foundation for multiple Audi model families with all- electric drive covering the high-volume B through D segments.