In Germany’s 2021 Goldenes Lenkrad (Golden Steering Wheel) awards, the Audi e-tron GT won in the Most Beautiful Car of the Year category. 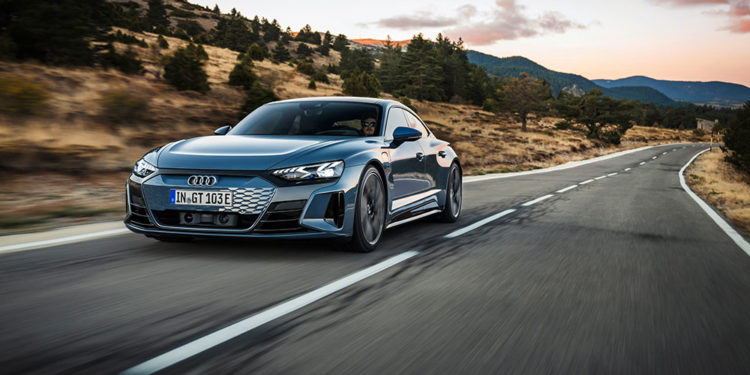 In Germany’s 2021 Goldenes Lenkrad (Golden Steering Wheel) awards, the Audi e-tron GT won in the Most Beautiful Car of the Year category. The winner in this category prevailed against 69 other car models. Readers of the motoring magazine Auto Bild, its counterparts elsewhere in Europe, and the newspaper Bild am Sonntag, all submitted their votes for this prestigious competition over the summer.

The 45th Golden Steering Wheel awards took place on November 9 at the Journalistenclub in Berlin’s Axel-Springer-Haus. During the ceremonies hosted by Barbara Schöneberger, Markus Duesmann, CEO of AUDI AG, was presented with the famous sculpture for “the Most Beautiful Car of the Year”. “In its design, the e-tron GT2 emphasizes our claim as an automotive design brand. With its impressive performance, it offers the most emotional kind of electromobility. And with its sustainable concept, it expresses an attitude. The e-tron GT is our flagship model,” said Duesmann.

A total of 70 new models competed against one another

The Golden Steering Wheel is not only one of the most prestigious, but also the oldest automotive competitions in Germany – awarded for the first time in 1976. Some 70 new models were competing for the 2021 Golden Steering Wheel, distributed across 12 categories. What is particular about it is that the vote for the Most Beautiful Car of the Year is a cross-category competition and readers can vote for it directly. That means it is a real audience award and therefore a heartfelt choice for an emotional car.

The e-tron GT2 is considered a trailblazer for Audi’s electric future, because from 2026, the company will only market new models with electric drive systems.The e-tron GT2 manifests emotional design, dynamic performance, and a sustainable concept – attributes that are turning this sportscar into an icon of the Audi brand even now. Apart from the Golden Steering Wheel award, this claim also substantiates several other prizes.

That is how the Gran Turismo won the 2021 Autonis award for best design innovation in the luxury class given by the journal auto motor und sport. The German Car of the Year 2022 also went to the e-tron GT2 in the luxury category. The e-tron GT2 embodies the electric flagship in the Audi portfolio and, despite the fact that it has hardly been on the market for a year, it has the potential to become a real classic.