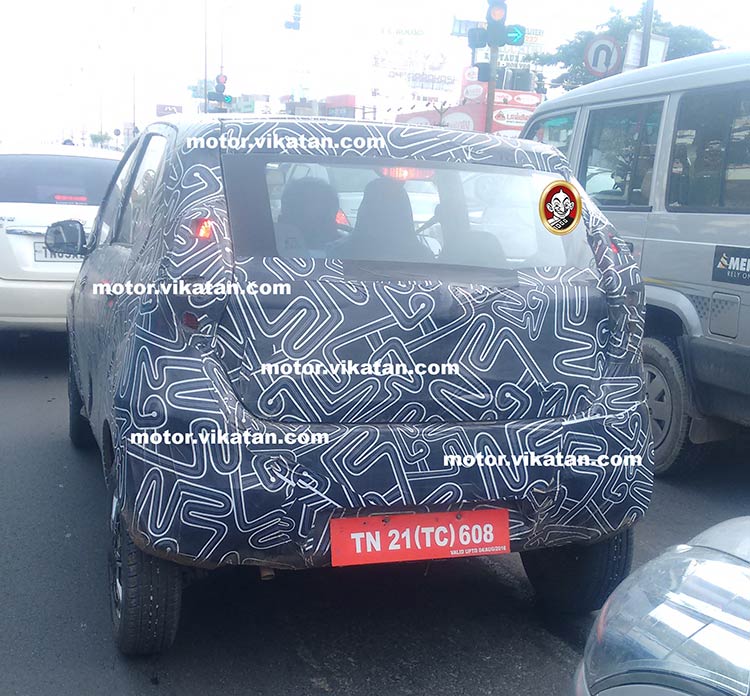 The upcoming small car from Nissan – Datsun RediGo was spied testing on the roads of Tamilnadu. This is the very first time that Datsun RediGO has been caught on camera. Nissan announced the partnership with ICC for 8 years with an intention to seed their brand name among Indians. Selling affordable cars like Nissan RediGO can be their next strategy. Nissan RediGO proportions is very similar to its concept car with less aggressive lines. One could notice that the tail lamps of the Datsun RediGo comes with jetting-out styling. The window line of the new RediGO is also stooping towards the front end and rising sharply towards the rear side of the car.

The spied Nissan Datsun RediGO is based on the CMF-A platform, which also hosts the popular Renault Kwid car. The CMF-A platform is a brand new platform that is jointly developed by Renault and Nissan and will be used for future products under their respective brands. Datsun RediGO has also been designed from scratch and is manufactured keeping the Indian roads and Indian customers in mind. RediGO has a tall stance and a decent ground clearance.

This entry-level car from Nissan-Datsun looks very stylish, spacious and feature loaded. The RediGO car shall get a newly styled interiors, that is different from the Renault Kwid.

Expected to be launched in mid 2016, Datsun RediGO will take on the likings of cars like Maruti Alto, Hyundai, Eon, Tata Nano and Renault Kwid.

Sources suggests that the price of Datsun RediGO will be less than that of Renault Kwid making it an affordable hatchback for the year 2016.

What to expect from Datsun Redi-GO? - GaadiKey Blog

[…] fully ready, production version of the upcoming entry level hatchback from Datsun, the Redi-Go, was spied on the roads of Chennai. Talking about the pricing of the car, Datsun’s upcoming hatch […]