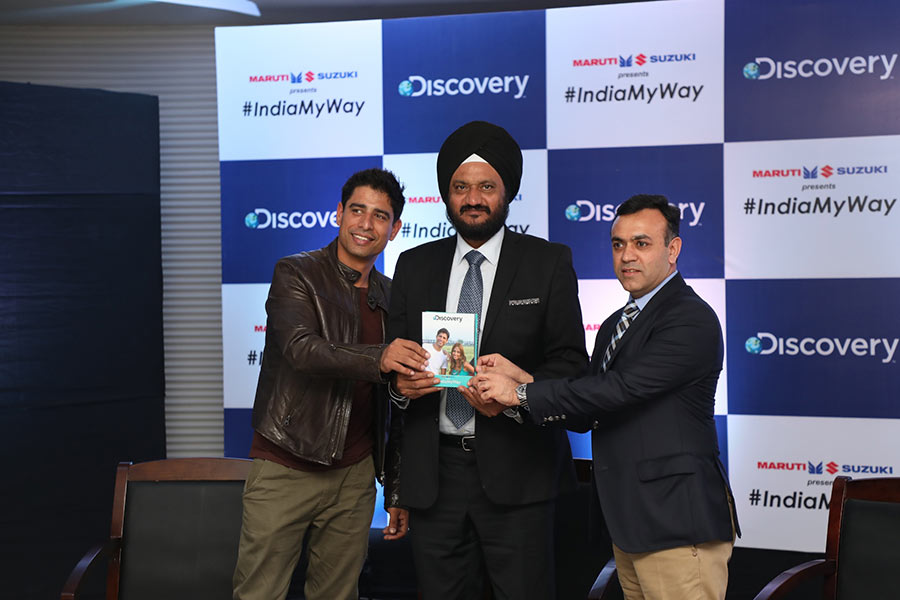 Discovery Channel in association with Maruti Suzuki India Limited (MSIL) organized an event in New Delhi to celebrate the culmination of its journey across 29 states. Cruising around in a Maruti Suzuki Vitara Brezza, covering over 28,000 kilometers, the epic-journey entitled #INDIAMYWAY was captured by Discovery cameras and was televised on the network.

A showreel presenting the best-off moments of the journey was screened at the event. On this occasion, Discovery also released a DVD pack of the television series #INDIAMYWAY, which was unveiled by Mr. R.S Kalsi, Executive Director, Marketing and Sales, Maruti Suzuki India Limited (MSIL), Mr. Karamjit Dua, Vice President – Advertising Sales (South Asia), Discovery Networks Asia-Pacific and Meraj Shah, actor and presenter of the series.

The 13-part series #INDIAMYWAY which aired on Discovery, travelled across India in search of young Indians, their passion and their continual quest for the unusual, glamourous and adventurous side of life. The series was hosted by Paloma Monappa, an actor and avid traveler, and Meraj Shah, a travel writer, who went on a road trip for an exploration of a ‘New India’. They introduced viewers to a range of fun, eclectic characters ranging from celebrities, tribal fashionistas, women wrestlers, young scientists, tattoo artists, path breaking entrepreneurs and many others.

It has been a matter of immense pride and utmost privilege for the two pioneering brands – Maruti Suzuki and Discovery to collaborate and explore the new-age India. Maruti Suzuki Vitara Brezza, a compact SUV, was the vehicle of choice in this journey to experience the changing landscape, culture, lifestyle of the millennial Indians.

Discovery offers captivating and incomparable blend of programmes that stimulate viewers’ mind. #Indiamyway has been our endeavor to showcase the immense talent, passion and changing aspirations of the millennials in the country. The adventurous journey covering length and breadth of the country reflected a refreshing wave of liberation and empowerment which paints an inspiring picture of the new-gen India.

I have been travelling for years, however, this road trip was unique and invigorating. #Indiamyway has been once-in-a-lifetime kind of journey which introduced us to some amazing people who are shunning the conventional, are driven by action and are fostering a sense of meaning and purpose. It was one of the most enriching experiences, offering a stimulating view about the contemporary wave in our socio-cultural structure.

Catch the finale episode of #INDIAMYWAY on Sunday, 8th January at 8 PM on Discovery Channel.