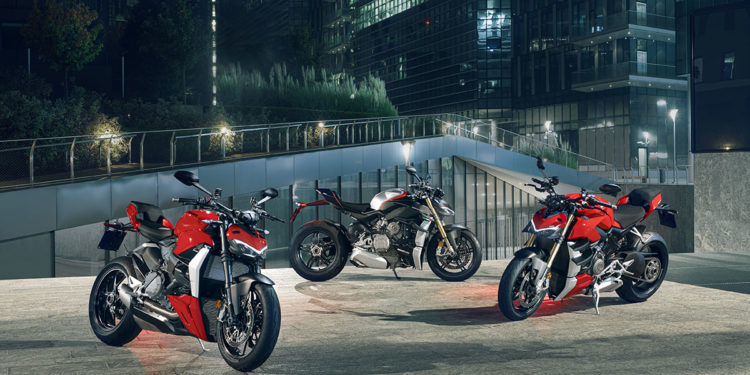 Ducati expands the Streetfighter family with the introduction of two new models: the bold and essential Streetfighter V2 and the top-of-the-range Streetfighter V4 SP. All the in-depth information on the two bikes have been revealed during the fourth episode of the Ducati World Première web series.

The new Streetfighter V2 is a sports naked with a one-of-a-kind character. It accommodates the needs of those riders who are looking for a bike capable of combining the sporting Panigale V2’s DNA with both the attitude and style of the admired Streetfighter. The result is an intuitive and easy-to-handle vehicle, with the right dose of power to ensure feisty performance and maximum riding fun.

It is noteworthy that this project is the precious fruit of the reinterpretation of Ducati’s successful “Fight Formula”, this time applied to the Panigale V2, stripped of the fairings and equipped with high and wide handlebars. The dry weight of this vehicle is 178 kg and the engine is the 955 cc and 153 hp Superquadro controlled by the latest-generation electronic package.

The new Streetfighter V2 is essential and characterized by a truly sharp design, which embraces the classic stylistic elements of the Streetfighter V4, starting with the distinctive headlight, which recalls the V-shaped DRL typical of Ducati sports bikes and is inspired by the famous grin of the Joker.
The design concept behind this new model is built around the mechanics inherited from the Panigale V2, with the Superquadro engine as a bearing element.

Ergonomics has major rider-centric features and is focused on road use with the added values of sportiness and comfort. The high and wide aluminum handlebars replace the handlebar risers of the Panigale V2. The saddle now is wider and has new padding that contributes to make this bike even more comfortable. In addition, the footpegs have been repositioned to increase the amount of room. All these improvements allow the biker great control in sporty riding and facilitate everyday use at the same time.

The engine of the Streetfighter V2 is the 955 cc Euro 5-compliant Superquadro, capable of delivering a maximum power of 153 hp at 10,750 rpm and a maximum torque of 101.4 Nm at 9,000 rpm. This engine results not only usable and enjoyable on the road but also effective and excellent on the track, where can be easily managed. Compared to the Panigale V2, the Streetfighter V2 project has a shorter final ratio (15/45 vs 15/43) which guarantees greater torque to the wheel at road speeds while giving better engine responsiveness when re-opening the throttle.

While developing this new model, Ducati engineers focused their attention on the chassis set-up. As a matter of fact, the Superquadro engine is used as a bearing element connecting the compact front structure, consisting of a monocoque frame in die-cast aluminum fixed to the engine head. The single-sided swingarm, which is also connected to the engine, is 16 mm longer compared to that of the Panigale V2, a winning point which contributes to ensure the stability of the whole bike.
To this platform are added the 43 mm Showa BPF front fork and the Sachs shock absorber, featuring dedicated calibration to make the bike more comfortable on the road as well as easily adjustable for a whole new dimension of fun on the racetrack.

The Streetfighter V2 is equipped with 5-spoke wheels and the new Pirelli Diablo Rosso IV tyres: 120/70 ZR17 at the front and 180/60 ZR17 at the rear, which provide a super fast response to the rider’s needs together with an extra cornering feeling. Except for the adoption of brake pads characterised by a less aggressive bite, more suitable for road use, the whole braking system is faithfully taken from the Panigale V2 and features Brembo M4-32 monobloc radial calipers with 320 mm diameter discs.

The bike is equipped with full-LED headlights with front DRL and a 4.3” full-TFT dashboard characterised by an intuitive interface that recalls the Streetfighter V4 family-feeling.

The Streetfighter V2 will be available at Ducati dealerships starting from December 2021 in the Ducati Red colour with black rims.

The Ducati Performance catalogue features numerous accessories designed to enhance look, performance and style of the new Streetfighter V2. Among these, the wings stand out, designed by Ducati to obtain even higher performance in track use.

For 2022 Ducati introduces also top-of-the-range Streetfighter V4 SP model, offered in a numbered version and marked with the well-known “SP” (which stands for Sport Production) abbreviation. The new Streetfighter V4 SP is the most adrenaline-pumping naked to ever roll its wheels off the production line in Borgo Panigale. This thanks to a special technical equipment that perfectly combines the “Fight Formula” with the “SP” specifications, further improving the power-to-weight ratio of the Streetfighter V4 S, which was already at the top of its category, and making the bike even more effective on the track.

The essential and captivating “Winter Test” livery has been conceived by the Ducati Centro Stile taking inspiration from the Ducati Corse motorcycles ridden in MotoGP and SBK Championships pre-season tests. The Matt Black of the fairings combined with the Matt Carbon finish of rims and wings superbly contrasts with the bright Red accents and the sparkling brushed aluminum tank. The new born from Borgo Panigale is also enriched with some beautiful details, such as the progressive number printed on the handlebar and the Italian flag colour scheme on the carbon wings.

The Streetfighter V4 SP is equipped with 5 split-spoke carbon rims, 1.4 kg lighter than the forged aluminum ones fitted as standard on the Streetfighter V4 S and capable of reducing the inertia by 26% at the front and 46% at the rear, making the bike significantly more agile and lighter when changing direction. The exclusive Brembo Stylema R® front brake calipers guarantee uncommon braking power, as well as stunning performance even during extended use on track*.

The new bike is equipped with the Öhlins Smart EC 2.0 with the event-based system that can vary the damping according to the rider’s riding style, and together with biplane wings they increase confidence and ensure the best performance in sporty use.

The beating heart is the 1,103 cc Desmosedici Stradale with 208 hp capable of delivering a torque of 123 Nm at 9,500 rpm (Euro 5-compliant). On the Streetfighter V4 SP the Desmosedici Stradale is fitted with the STM-EVO SBK dry clutch, which guarantees a better anti-hopping function, even in the most aggressive downshifts, and greater fluidity during all “off-throttle” stages, a crucial aspect to be truly effective on the track when pushing to the limit.

The equipment of this unique bike is enriched by the adjustable aluminum and CNC machined footpegs, the carbon front mudguard, the lithium-ion battery and a range of accessories suitable for the “track days”, such as the open carbon clutch cover** and the caps for removing the license plate holder**.

Thanks to its technical equipment, the Streetfighter V4 SP is the ideal companion for the amateur who wants to rule the track riding a naked bike and get an instant response. Braking capacity results in fact out of the ordinary, the bike is easier to lay into the corner and gets to the apex faster, not to mention the great stability at high speeds.

The Streetfighter V4 SP will be available in single-seat configuration in the “Winter Test” livery. The bike will be in Ducati dealerships starting at January 2022.