Hero MotoSports Team Rally has started its first campaign of the season on a positive note with all three riders delivering a solid performance in the first stage of the Andalucia Rally in Spain. 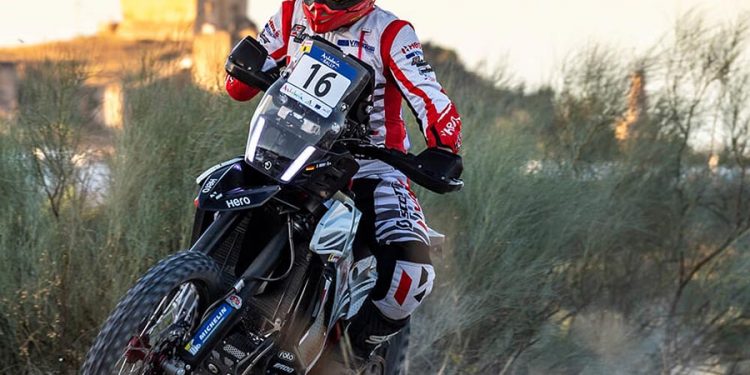 Hero MotoSports Team Rally has started its first campaign of the season on a positive note with all three riders delivering a solid performance in the first stage of the Andalucia Rally in Spain.

Joaquim Rodrigues made an impressive start to maintain a blazing pace throughout the stage, finishing just outside the top 10, at 11th place. The new Hero on the block, Sebastian Buhler, wasn’t too far behind from his mentor and finished the stage in the 15th place. Indian ace C S Santosh brought the stage home with a 23rd place finish. In the overall rankings as well, the riders retain the same rankings at the end of Stage 1.

With many positives to take home, both in terms of the bike and rider performances it was a very good first competitive outing for Hero MotoSports Team Rally – the motorsports division of Hero MotoCorp – the world’s largest manufacturer of motorcycles and scooters.

The first full stage of the Rally kicked-off today from the Rally HQ at Villamartin, covering 59 kms in liaison to reach the start line near the town of Moron De La Frontera. The special stage of 258 km that exposed the competitors to almost all types of terrains that the Andalucia zone has to offer, including technical sections, sand, open tracks, narrow piste and even vegetation.

For the second stage tomorrow, the Rally will start near the town of Algamitas and end in Villamartin, covering a total distance of 336 kms, including the 243 kms of special section.

“Today was a good day for me. In the beginning I was still feeling a bit tense but then I started relaxing a bit and everything started coming together nicely. It was not too bad out there today so I am happy to bring my Hero 450RR back home safely.”

“The stage was very different from what we have experienced in the past. In the first part of the stage I lost my way a bit while finding a way point, which cost me some time. Overall I am happy with my performance today and looking to build on it in the following stages.”

Sebastian Buhler, Rider, Hero MotoSports Team Rally: “It was a very good stage for me today and everything fell in place. I like this kind of terrain as it had a mix of fast and slow sections. Now looking forward to the next stage.”

Audi Q2 Bookings Open – To be Priced under Rs 35 lakhs