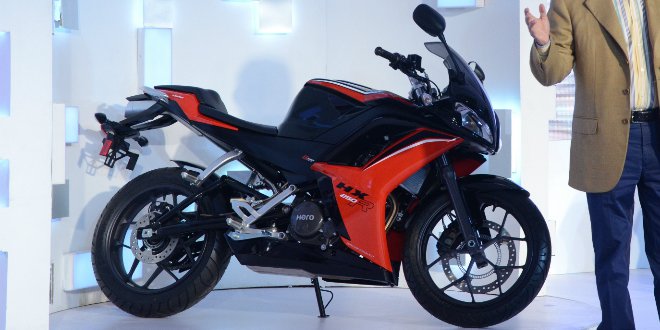 Popular Indian 2 Wheeler automaker, Hero MotorCorp has unveiled the all new Hero HX250R motorcycle during the Auto Expo 2014 and it is taking longer than usual to enter the Indian 2 Wheeler market. Without doubt, Hero HX250R can very well become the next big product globally in the affordable performance bikes section.

The Indian 2 Wheeler automaker, Hero, has also recently said in its statement that shutdown of EBR would not affect the Hero HX250R launch plans as this bike was already completed much before EBR’s closure.

The upcoming Hero HX250R is going to be powered by new 249cc, 1 cylinder , water-cooled and fuel-injected engine that churns out a maximum power of 31 BHP and provides a maximum torque of 26 Nm. The engine of this bike is mated with 6-speed manual transmission. This is the first engine that Hero MotoCorp has ever developed without any sort of technical assistance from Honda.

Talking about the brakes of this bike – up front, the bike shall come with a 300mm disc, where as the rear gets a 200 mm unit. ABS ( Anti-local braking system) is expected to be provided as an option. Hero HX250R would ride on 17-inch wheels that would be shod with 110/80/17 spec rubber at front and a 140/70/17 tire at the rear. The company claims that the motorcycle would be able to dismiss 60 kmph from standstill in 2.7 seconds and can attain a speed of 100 Kmph in less than 8 seconds. The top speed of the Hero HXR250R is 160 Kmph.

Hero HX250R launch in India is expected to get launched by end of year 2015.