Indian Government is aiming at an INR 2 lakh crore ethanol economy from its present size of INR 20,000 crore as the development of an extensive ethanol industry would mean new markets for the country's biomass and agriculture sector. 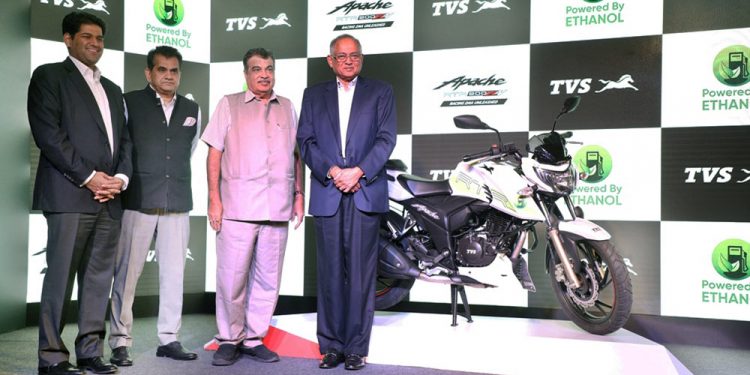 Mr Nitin Gadkari, Minister of Road Transport and Highways, Govt of India, today said that in order to reduce pollution levels in the country, the Government is aiming at an INR 2 lakh crore ethanol economy from its present size of INR 20,000 crore as the development of an extensive ethanol industry would mean new markets for the country’s biomass and agriculture sector.

Addressing the 2nd annual conference on Alternative Fuels Roadmap for India@75: Moving towards Greener Future, organised by FICCI, Mr Gadkari highlighted that the flex-fuel vehicles will play a crucial role to decarbonize the transport sector, making it sustainable for the environment, economy, and ecology.

“We are going to make it compulsory for all vehicle manufacturers to make flex-fuel engines that can run on more than one fuel to reduce pollution,” said Mr Gadkari. The Minister also cited examples of Brazil, Canada, and the USA, where most automobile companies manufacture flex-fuel engines.

We will tap into the strength of the agriculture sector to produce energy and power. The production of bio-CNG from agricultural waste will solve the crisis of air pollution. “We also want to promote the use of green hydrogen, which can help us accomplish the zero-carbon emission mission,” he said.

He further said that the government intends to have electric vehicle sales penetration of 30 per cent for private cars, 70 per cent for commercial vehicles, 40 per cent for buses and 80 per cent for two and three-wheelers by 2030. Mr Gadkari noted that there is a substantial response seen in the domestic market for electric vehicles like electric rickshaws, cars, scooters, and electric bicycles. The Minister emphasised that, simultaneously, research on developing high-efficiency batteries and EV components is the need of the hour.

He applauded the centre and state governments for taking necessary initiatives to promote the manufacturing of electric vehicles by framing favourable policies in the form of incentives, GST exemptions, loan facilities, PLI and other schemes. The minister stated that NITI Aayog has inspired 25 states to come up with EV policies, out of which 15 have already announced their state EV policy.

“To encourage electric vehicle, battery-operated vehicles have been exempted from payment of fees for issue of renewal of registration and new registration mark” he added. India, the minister said has made significant progress towards improving green energy access over the last decade and the government plans to shift public transportation to clean energy sources. “The generation of bio-CNG from agriculture waste will solve the problem of air pollution caused by the burning of agricultural waste in the field,” he said.

Speaking at the event, Mr Tarun Kapoor, Secretary, Ministry of Petroleum and Natural Gas, said that we must look at alternative fuels in a bigger way as the world is in an energy crisis. The impact of the rise of the global price of crude and L&G has affected the Indians as we are largely dependent on imports.

He further stated that we are trying to encourage ethanol manufacturing in the country and the motor vehicle manufacturers must be compatible with the technical requirements of ethanol. “We have set up a committee for recommending ways and means for maintaining the octane numbers even with a higher percentage of lending,” said Mr Kapoor.  We have a target to set up 10,000 CNG stations in the country, he said. “We will blend CNG with Biogas,” said the Secretary.

Mr Amit Varadan, Joint Secretary, Ministry of Road Transport & Highways, said that the Ministry is committed to reducing the emission intensity of its GDP by 33- 35 per cent by 2030. MoRTH has issued various regulations related to the promotion of alternative and clean fuel transportation. He further mentioned that a robust regulatory framework is being drawn to foster the use of electric mobility in India.

Dr OP Agarwal, Chair FICCI, FICCI Working Group on Future of Mobility and Chief Executive Officer WRI India, said, issues like climate change and COVID are global problems that does not recognise boundaries and action needs to take place at a global level. Hydrogen is becoming promising in areas where electric mobility today may not work.

Mr Palash Roy Chowdhury, Co-Chair, FICCI Working Group on Future of Mobility and Chairman and Managing Director SmartE, said we have reached the scale today where we need to urgently attract strategic investments in R&D as well as commercial manufacturing of better technology.

Mr Dilip Chenoy, Secretary General FICCI said petroleum is the most used fuel for transportation, and although it will remain the standard fuel for the near future, alternative energies are becoming more viable.