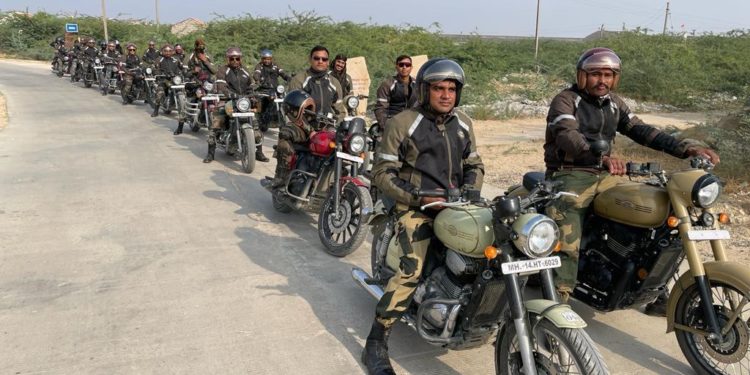 The year 2021 is being celebrated as Swarnim Vijay Varsh to commemorate the victory of Indian Armed Forces in the 1971 Indo-Pak War. As a part of the year-long celebrations, Jawa Motorcycles partnered with the Indian Army to organise commemorative rides throughout the country to celebrate the valour of our servicemen.

The latest one in the series was the ride to Longewala, a border town in the Thar Desert in the western part of Jaisalmer district, Rajasthan. The Battle of Longewala played an important part in the victory of 1971 war. The rally kicked off from Koteshwar, the western most point of Gujaratand proceeded to Longewala covering a total of 1,495 km over eight days from 29th November to 05th December 2021.

Through the course of the rally, the riders from India Army, Navy, IAF, BSF and Coast Guard connected with the Veer Naaris, War Veterans and ESM in the Corps Zone. They also rekindled the victory and valour of the Indian Armed Forces in this famous battle.

“It is a great honour for us to be a part of the yearlong celebrations of Swarnim Vijay Varsh. We as a company have always stood in admiration of our armed forces and the various rides throughout the year have given a chance to celebrate their bravery and sacrifice even more. Being entrusted by the Indian Army for their expeditions around the country is a matter of great pride for us.”

The #ForeverHeroes initiative was initiated by Classic Legends to inculcate a sense of gratitude towards the Armed Forces. Right from its early phase, the company has been developing a culture of values to appreciate the efforts and sacrifice that helps keep the country safe, peaceful & prosperous. In 2019, the company formally announced this initiative to contribute to the cause of welfare of Armed Forces personnel and their next of kin.  The key happenings under this initiative are –

·         Classic Legends raised a sum of INR 1.49 crore by auctioning 13 motorcycles from its first batch of production motorcycles, contributing the proceeds of the auction to Armed Forces Flag Day Fund. The handover was done by Classic Legends to Kendriya Sainik Board, Ministry of Defence (Government of India) at a joint ceremony in the presence of eminent armed forces veterans, war heroes and officers.

·         Contribution towards building of a Community Hall at the Leh’s War Hero Colony where Veer Naaris (widows of war heroes) reside with their children. They are the families of the war heroes of the Ladakh Scouts regiment who fought in the Kargil War

·         Supporting Indian Navy with motorcycles, services support and gear for their ‘Seven Sisters Ride’ across the North East India, done with the intention of highlighting Navy as a glorious career option among the youth in the region

·         Erecting the ‘Border Man’ statue at Wagah Border as a tribute to the BSF personnel, signifying their spirit of bravery, dedication and sacrifice

·         As a part of Swarnim Vijay Varsh celebrations this year, Jawa Motorcycles will also be making a contribution to the Armed Forces Flag Day Fund for the welfare of Army personnel

In its day-to-day functioning, the company also looks forward to facilitating interactions of its employees & customers through its network and other suitable occasions with the armed forces personnel to help build regard & respect for their contribution to the country. As a part of this, the company delivered the first few motorcycles to its customers by the hands of veterans, ex-servicemen and serving officers

Classic Legends Pvt. Ltd. is an Indian company established to re-introduce iconic marquee motorcycle brands in the market. Classic Legends aims to become India’s first true lifestyle company and provide opportunities to consumers to relive the heritage of classic brands by co-creating exciting product and service offerings along with the motorcycling ecosystem.

Jawa is a motorcycle brand from Czech Republic, erstwhile Czechoslovakia, with a 90-year legacy, which in its heydays exported classic, well-engineered and rugged motorcycles to more than 120 countries. It entered the Indian markets in the early 1960’s. The twin aspects of Jawa motorcycles – its beautiful design and strong performance character helped it not only to win hearts but also win many world titles.

From its marquee brands portfolio, Classic Legends is currently bringing alive the Jawa, not simply as a brand but a way of life. Classic Legends has leveraged the best of its partner capabilities in design and engineering along with the global expertise, to launch products that capture the DNA and ethos, of the original Jawa.