Thanks to AutoSamiksha, we have full details on Automobile sales for February 2015. 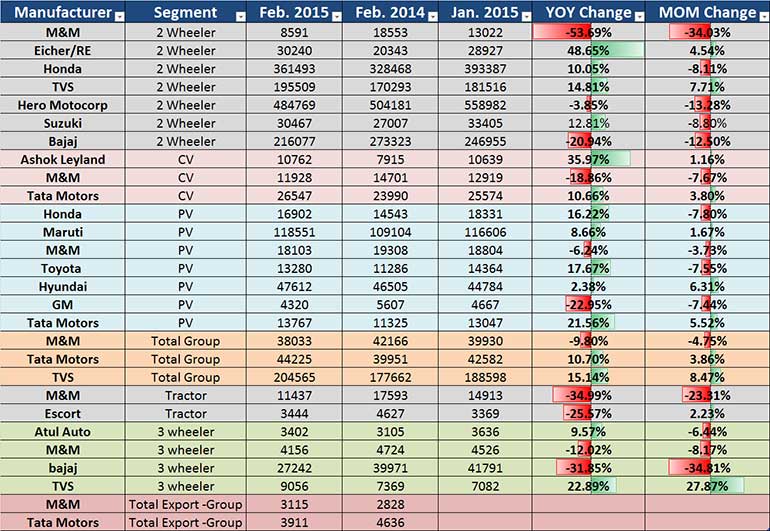 Here is the summary of Automobile sales report for February 2015:

Maruti Suzuki India (MSI), country’s largest car manufacturer reported a 8.7% increase in total sales in February. Maruti Suzuki India sold 1,18,551 car units as against 1,09,104 units in the same period of last year.The company said its domestic sales increased by 8.2 per cent during the month to 1,07,892 units as against 99,758 units in February 2014.

Hero MotoCorp, India’s largest two-wheeler maker posted its sales volume for the month of February 2015. The company informed BSE that the sales clocked 484,769 Units of Two-Wheelers in Feb 2015, as against 5,04,181 in the corresponding month last year. The company also revealed that many new launches will be seen in the coming months, including new products in scooters.

Hinduja Group flagship company Ashok Leyland today reported a 36% jump in total sales at 10,762 units for February, 2015, as against 7,915 units in the same month last year. :

General Motors India today reported whooping 22.95% decline in sales at 4,320 units in February as against 5,607 units in the same month last year. In response to the performance, General Motors India Vice President P Balendran said: “The discontinuation of excise duty benefits impacted the industry during last two months.”Even the Budget announcements are not enough to revive the consumer sentiment.”