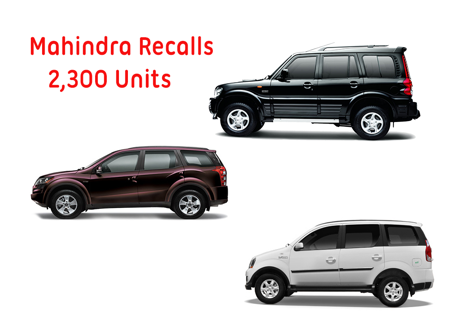 Mahindra & Mahindra issued a statement that it has recalled around 2,300 units of popular SUV’s and multipurpose utility vehicles. The vehicles in the list include Scorpio, XUV500 and the Xylo. The recall is to rectify the defective vacuum pump in the engines manufactured in May 2014.

The preventive measures is taken and the company will personally call its customers of the inspection, if need the part will be replaced free of cost as stated by the company.

From 2012, the auto industry body Society of Indian Automobile Manufacturers started voluntary recall of vehicles for safety concerns, since then company manufacturers like Maruti Suzuki, Honda, Ford and General Motors   have recalled many of its defective units.

Taking into consideration, Mahindra & Mahindra had recalled 23,000 units of its 2.5 litre variant during July this year.