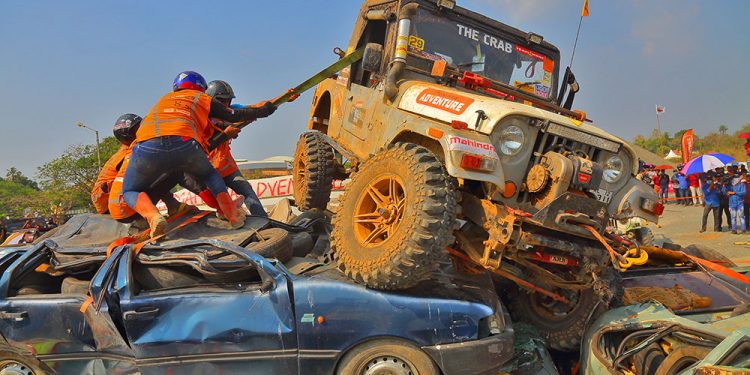 Mahindra & Mahindra Ltd. (M&M), concluded the third edition of Thar Fest held on March 10, 2019 in Kochi. Adding zest to the Thar Fest was the fourth edition of the Mahindra Adventure ‘Club Challenge’ where the top 11 off-roading clubs from across the country, competed for off-roading honours.

Thar Fest is aimed at celebrating the camaraderie between the off-roading community and 4 X 4 enthusiasts, while celebrating the iconic ‘Thar’ brand. Thrilling off-roading activities and Thar related contests kept the participants captivated throughout this day long festival. Spectators also indulged in other activities like the Thar Parade, 4*4 Experience Zone, Heritage Mahindra Display, Customized Vehicle Display and a Live Music performance.

Participants from 11 off-roading clubs from across India fought a ferocious battle at the ‘Club Challenge’ to win the coveted title of ‘Best Off-Roading Club’ in India. However, the obstacles here focused more on teamwork rather than on individual performances. The ‘Club Challenge’was kicked off on March 9, 2019 with exciting night stages from 6:30 PM till midnight. The next day, March 10, 2019 witnessed the day stages between 10:00 AM and 6:00 PM.

Some of the obstacles were the famous ‘Demolition Derby’, an event where the off-road vehicles had to negotiate a path over a pile of junk vehicles. Another long-standing obstacle was ‘Pass the Baton’ where all classes of vehicles run a relay format of driving and have to pass the baton from one vehicle to another and cross the finish line.

“The Mahindra Thar is an iconic brand, and holds a very special place in the hearts of auto enthusiasts and the off-roading community. It is an extension of the Mahindra legacy, and reflects the company’s tough & rugged, go-anywhere capabilities. With ‘Club Challenge and Thar Fest’, we are delighted to see the passion of off-roading enthusiasts. Like in previous years, this year too, the ‘Thar Fest’ saw scores of 4×4 enthusiasts come together to celebrate the tough & rugged DNA of Mahindra vehicles. Furthermore, in ‘Club Challenge’, diverse off-roading clubs fought for the title of “Best Off-Roading Club”, facing some of the toughest obstacles through challenging terrain.”

Launched in 2010, the Thar CRDe is a true-blue, stylish off roader, an evolved version of the Mahindra the MM 540.  In 2015, the company introduced the New Thar CRDe with the first in class feature – the auto engaging differential lock. A cult off-roader, the New Thar CRDe can triumph over any terrain and reflects the company’s legendary tough and rugged DNA like no other model. Today it is the most favored recreational 4×4 vehicle among enthusiasts. The Thar is central to Mahindra Adventure off-roading events and is also the lead training vehicle at India’s off-road training academies located at Igatpuri and Mangalore.

Over the years, the Thar has played a significant role in shaping the lifestyle vehicle segment in India. Its powerful CRDe engine delivers both power and fuel economy. The cabin can seat six, while two rear bench seats can be folded to create a massive luggage area.

It is available in a BS IV variant with power steering as a standard fitment, allowing for a comfortable drive. A wide range of genuine accessories & customization options are also available.