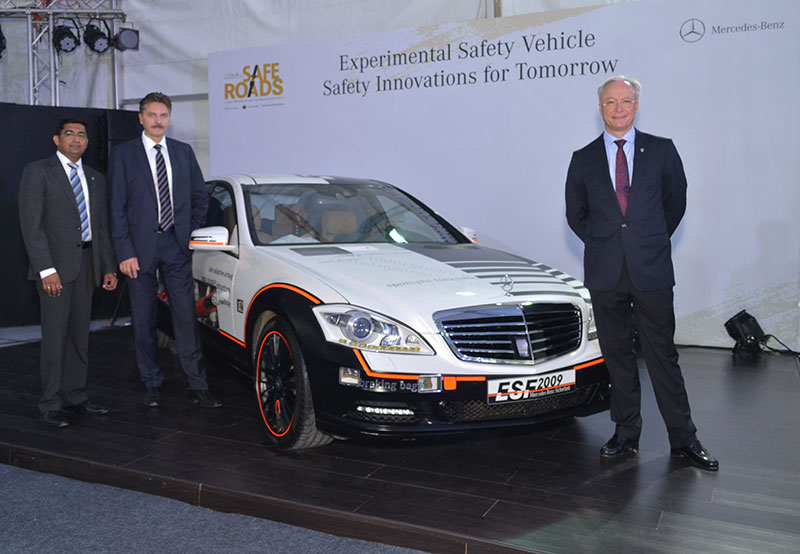 Mercedes-Benz and its group companies Mercedes-Benz India (MBIL), Daimler India Commercial Vehicles (DICV), Mercedes-Benz Research and Development India (MBRDI) and Daimler Financial Services India (DFS) inaugurated Safe Roads – Pune, a unique Corporate Social Responsibility (CSR) initiative, as part of the multi-city awareness road-show that started in New Delhi, earlier this year. Safety is a core competency and a core value for Mercedes-Benz and its automotive brands. Mercedes- Benz in particular, is renowned worldwide for developing highly sophisticated safety systems. However, implementation of effective safety systems remains a challenge, as the road users often do not comply with traffic rules or do not use the safety systems onboard their vehicles.

On Indian roads, approximately 140,000 people die every year of road accidents, largely caused due to ignorance of safety norms and rules. ‘Safe Roads’ was hence conceptualized by Mercedes-Benz, in an effort to reduce this startling fatality rate on Indian roads, by creating more awareness on road safety. Mercedes-Benz is convinced that such initiatives can begin an era of road safety awareness that supports a new culture of road safety for Indians. Over 70 per cent of the fatalities can be reduced in the next ten years through education and enforcement of safety rules and by creating awareness.

‘Safe Roads’ is a collaborative initiative of Mercedes-Benz group companies along with JP Research, Apollo Hospitals and IIT Delhi. The partner organizations have supported the initiative with in-depth research information and data on the existing scenario of road safety in India. These research reports also provide indicators of how the scenario can be improved through education and enforcement of traffic rules. 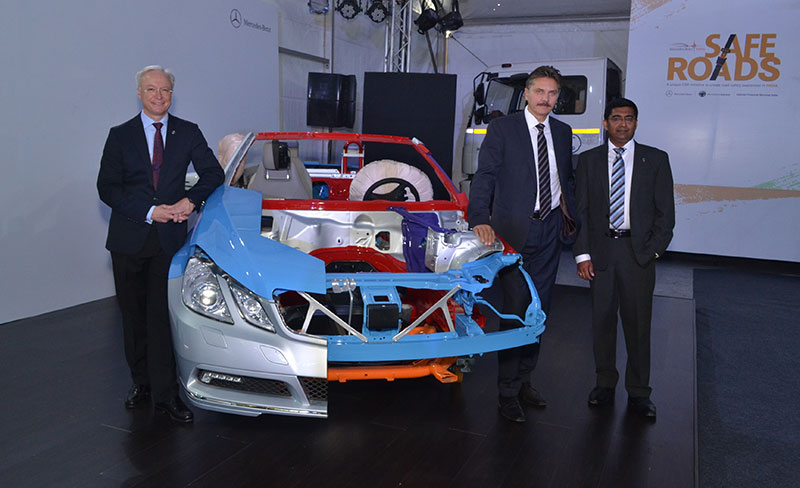 Safety is a core value for Daimler. All group companies prioritize on making their vehicles safe – for the user as well as for the environment they are operating in. When we learned about the accident and fatality rates in India, we decided to develop the ‘Safe Roads’ Initiative. This is also in line with our spirit of good corporate citizenship – meaning that we like to contribute to the society we do business with. We hope that our initiative will bring in an era of road safety awareness and will support a new culture of road safety among the people in India.

Technology, Innovation and Research go hand-in-hand in improving vehicle safety. With the Safe Roads initiative we have brought in a new era of safety awareness keeping the Indian road scenario in focus. Accidents and resulting fatalities can not only be greatly reduced through innovative technologies, but also through responsible driver and passenger behavior. Mercedes-Benz has developed state-of-the-art safety features in its products that have proven to be effective. At MBRDI alone there are over 100 engineers contributing to these technologies in active and passive safety of Mercedes- Benz vehicles with 54 patents filed on automotive safety alone. While there are policy and regulatory hurdles that exist in order to apply them in India, we hope that the ‘Safe Roads’ initiative will enhance the road user’s awareness of such technologies, and will help persuading the legislators to ease these norms for the greater good of the society.

Mr Roland Folger who is the Managing Director and CEO of Mercedes-Benz India commented on the initiative:

As the inventor of automobile, Mercedes-Benz is committed to vehicle and road safety for decades. Safety remains our core competency and an integral element of our brand ethos, and we are extremely proud of our pioneering work in developing vehicle safety measures for almost 70 years now. Our safety related developments have not only benefitted millions of Mercedes-Benz drivers, but also saved millions of lives on the road. Considering the alarming fatality rates on Indian roads, it becomes our moral responsibility as a responsible corporate citizen to do our  share in reducing this. Mercedes-Benz firmly believes that there can never be a compromise on safety in order to accommodate form, function and comfort. We will remain the main driving force behind the advancement of the entire automotive industry with our innovative vehicle architectures and intelligent safety and assistance systems. We remain committed to spread the awareness about road safety in India.

Professor B. B. Ahuja who is the Officiating Director at College of Engineering Pune commented,

College of Engineering, Pune is a nationally respected leader in technical education and has a rich history and dedication to the pursuit of excellence. We are excited to be associated with a globally renowned automotive brand like Mercedes- Benz who champions the cause of road safety in India, which is the dire need of the hour. With Safe Roads initiative, we are confident that Mercedes-Benz will help create numerous brand ambassadors of safety, especially among the student community who are the future of the nation. We also want each and every educated mind to take up the mantle of creating road safety awareness and make our roads safer. Moreover we believe that this is a step forward in building smart cities.

‘Safe Roads’ aims at spreading the message of road safety through physical demonstration, visual aids and research reports. The physical demonstration will be undertaken with the use of exhibits that have been brought from Germany providing a real life experience of safety measures that can potentially save lives during road accidents:
The Belt-Slide exhibit enables visitors to experience the impact of seat belts in a simulated crash environment at low speed. The aim is to increase the percentage of seat belts usage for front row passengers including driver.
Airbags will also be on display (driver and passenger airbags, curtain airbags, knee bags, etc.). 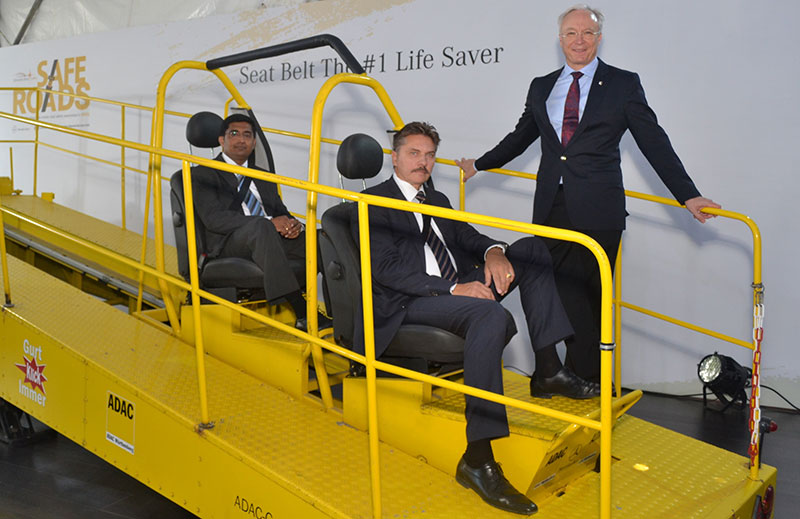  A ‘Body in White’ (BiW) passenger car exhibit highlights some of the core elements of a car structure which have high tensile strength that can absorb most of the energy during a crash and minimize passenger car intrusions.
Alcohol goggles on display also provide a unique experience. Wearing these special types of glasses simulates the common ‘walk-the-line’ activity which causes loss of balance and delayed reaction times. Visitors will feel their susceptibility to impairments and realize the potential severe consequences due to alcohol consumption.
An absolute highlight is the original ESF (Experimental Safety) vehicle. The ESF 2009 will be on display to showcase a glimpse of future of safety. The ESF illustrates trailblazing innovations in the field of safety like PRE-SAFE, Braking Bag, Interactive Vehicle Communication, etc., some of which have already found their introduction into current products.
According to the World Health Organization (WHO) India had seen the highest number of road traffic fatalities in 2010, and this made up about 11% of global road traffic fatalities. There has been some good work undertaken by the National Road Safety Council (NRSC) and WHO’s Decade of Action for Road Safety 2011-2020, where a declining road traffic fatality trend was observed in India for the first time, since 2012. However, road traffic injuries remain a concern as about half a million are reported each year. According to Ministry of Road Transport & Highways (MORTH), during the period 2003-2013, India’s reported road traffic fatalities grew by 60%, with around 137,572 fatalities in 2013. When compared with other emerging market country, China saw a 43% fatality reduction was observed during 2004-2012.
  If 2011 is taken as base year, the fatality trend will reach about 250,000 by the year 2025 if business as usual continues with respect to road safety. However, 38% fatality reduction could be achieved with strong enforcement on drunk driving, overloading and load protruding and 80% fatality reduction could be achieved with strong enforcement on driver related factors – including over- speeding. By 2025, the projected number of fatalities could be reduced to about 50,000, following the above enforcements.

According to a sample study, in 50% of the accidents, there were no accident avoidance manoeuvres from the drivers. Only in 30% of the accidents, drivers performed a brake or swerve manoeuvre or a combination of both. Also, the percentage use of seat belts by car drivers and front passengers is low (about 16%). There is a need to show case and make road users understand the impact; a typical seat belt will have in a crash scenario.

As many as 474 people died and 1106 people got injured due to road accidents in Pune in 2014, which translates into 1 death and 3 injured persons every day on Pune roads. Pune reported a total of 1433 road accidents in 2014. Of the total road fatalities in Pune, 23% comprises motorcyclists, followed by car occupants at 18.6%.

Following the successful editions in New Delhi and Ahmedabad, Safe Roads initiative will travel to Mumbai and Bengaluru, after Pune.

Hyundai Elite i20 to get automatic gearbox