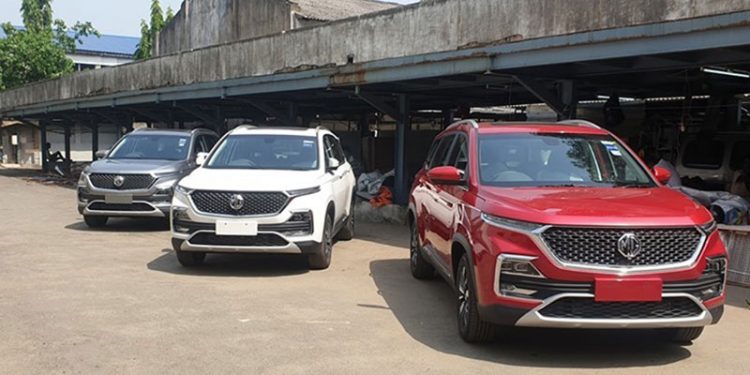 The Hector SUV from MG Motor shall soon hit the Indian roads. MG has officially announced that it is going to unveil its all new MG Hector on May 15th and the pre-orders shall open up from the month of June 2019. The British brand showcased the Internet car capability last month by demonstrating various connectivity and technology features that are new to Indian market in their yet to be announced MG Hector SUV.

MG has roped in British icon Benedict Cumberbatch for its promotions and has tied up with global tech partners like Microsoft, Adobe, Unlimit, SAP, Cisco, Gaana, TomTom and Nuance for Internet-enabled car features in MG Hector.

While the company has not made an official announcement on available color options for MG Hector, there are 2 color variants which has been shown to public domain – the Red and White. GaadiKey spotted an exclusive photo on Internet that revealed MG Hector in 5 different color options. Some of the MG Hector colours include:

Check out MG Hector in various color options along with photos below:

Check out more photos of MG Hector in Aurora Silver.

If you have planned / are planning to buy MG Hector SUV , what is going to be your color preference. Which MG Hector Color would you like to choose?