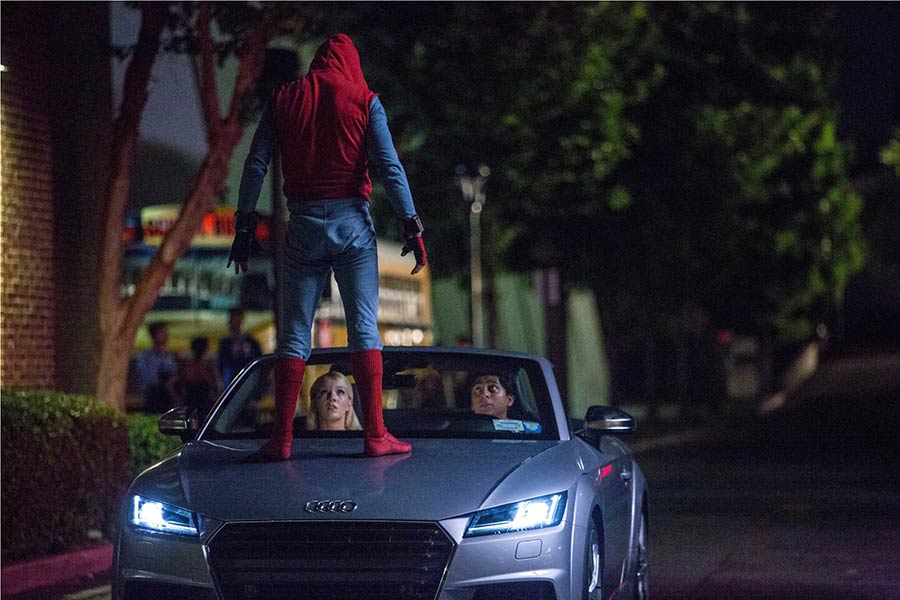 Before the official world premiere, the new Audi A8 appears on the silver screen. The flagship of the premium brand makes a guest appearance in the Marvel blockbuster ‘Spider-Man: Homecoming,’ in theaters worldwide in July. Therefore, movie fans will be the first to catch a glance at the luxurious sedan at the film premiere which takes place in Los Angeles on June 28.
In the Marvel blockbuster, Tom Holland plays ‘Peter Parker’ who’s chauffeured around by ‘Happy Hogan’ (Jon Favreau) in the new Audi A8 L. The movie scene allows a first impression of the front and side design of the new sedan. Besides that, moviegoers also get a demo of new innovations such as highly automated driving in traffic jams: while driving ‘Happy’ takes his hands off the steering wheel and, like magic, it continues to turn all on its own. The Audi A8 takes over the task of driving when the Audi AI traffic jam pilot is turned on.

In addition to the Audi A8, two other Audi models make guest appearances in ‘Spider-Man: Homecoming’: ‘Tony Stark’ stays classy with the Audi R8 V10 Spyder, whereas ‘Peter Parker’ himself drives an Audi TTS Roadster. The new Audi A8 will be officially presented to the public on July 11th at the Audi Summit (https://www.summit.audi/en) in Barcelona, Spain. ‘Spider-Man: Homecoming’ featuring the new Audi A8 will be in movie theaters around the world in July.