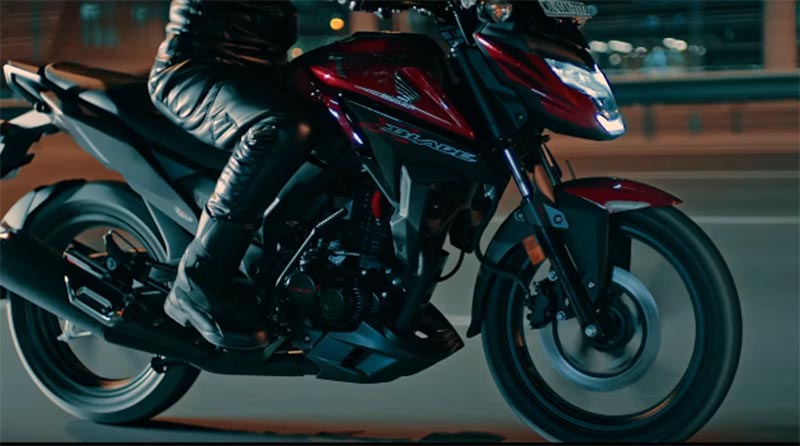 Honda Motorcycle and Scooter India Pvt. Ltd. has rolled out the latest 360 degree campaign – ‘One Look is enough’ for new 160cc motorcycle X-Blade. Developed by Dentsu One, a Dentsu Aegis Network Company, the campaign is on air across all popular television channels. The campaign will also show its presence during the FIFA World Cup broadcast.

Showcased for the first time at Auto Expo, the stylish X-Blade is the latest offering from Honda in 160cc sporty motorcycle category. With a commanding front stance and a futuristic segment first robo-shape LED headlamp X-Blade sets a new benchmark in the segment.

The objective of the campaign is to draw a clear line between a responsible citizen and an outlaw. The former works towards the betterment of society and abides by the rules. However, never boasts about his attributes and proves his mettle through his actions. In fact, ‘just one look is enough to make a lasting statement’.

Positioned as a sporty motorcycle with latest and industry first features, X-Blade does not follow conventional norms and is backed by innovation. The powerful LED headlamp, swanky new instrumentation and edgy design makes it stand out.

‘One Look is Enough’ campaign projects some real life situations in the society. Product attributes like robo-shape LED headlamps, masculine looks and a throaty engine note have been weaved into a story to substantiate the positioning of the motorcycle.

The story starts in a city control room where officers are stunned by a comet like fire ball falling from the sky. The camera pans extra-terrestrial object falls inside a glass dome where the all-new X-Blade is born from the golden splinters of the energetic blast. The rider comes out of a pod, powers the motorcycle and hits the city streets with the powerful LED headlamp tearing through the darkness. A voiceover announces – ‘One look and the darkness ends’.

The rider and X-Blade reach a dark, desolate alley where some hooligans are teasing a girl. Powerful high beam of the motorcycle illuminates the alley with light and revs the engine to announce his arrival, scaring the eve teasers to run away. A voiceover highlights the X-Blade as – ‘One look and they know who you are’.

The scene now shifts to the rider showcasing the ease of handling. The long seat of the motorcycle allows the rider to have a comfortable ride. At the next traffic light, the rider stops behind the zebra crossing but sees a young man in a car standing much ahead of it. Flashing the bright pass light, the rider on X-Blade signals the young man in the car. In a panic, the man quickly fastens his seat belt and takes a reverse to stop behind the zebra crossing. A voiceover prompts ‘One look and the streets obey’.

The security personnel in the control room are impressed by the bold features and design of the X-Blade. The rider zooms past the curved city street with the highlighting the ‘Robo face head lamp’ and the film closes with voice over announcing ‘X-Blade, One Look is Enough’

The new X-Blade ‘One Look is Enough’ campaign differentiates the average motorcyclist from X-Blade customers. Packed with futuristic features and aggressive looks, X-Blade creates a new benchmark which will captivate the youth.

The robo-face of the motorcycle inspired us to create the tag line ‘one look is enough’. The X-blade sheds light on the dark deeds of society and redeems it of all evil. The entire process of making the new motorcycle with a particle of light from the universe was exciting,

“The 160cc motorcycle is the entry into the performance bikes’ segment which is crowded with the products from almost every two-wheeler manufacturer. To break the set codes of this segment, you need a future-forward product and an emphatic communication to connect the brand with its consumer.

‘One look is enough’ campaign has been crafted to position the brand as a ‘Hero archetype’ with a very positive, strong, individualistic and edgy personality. This is a bold execution from a brand that has set out beyond the conventional, safe and conservative. It ticks all the boxes which further strengthen the leadership position of brand Honda

Suzuki to Introduce City Car Concept in August at GIIAS