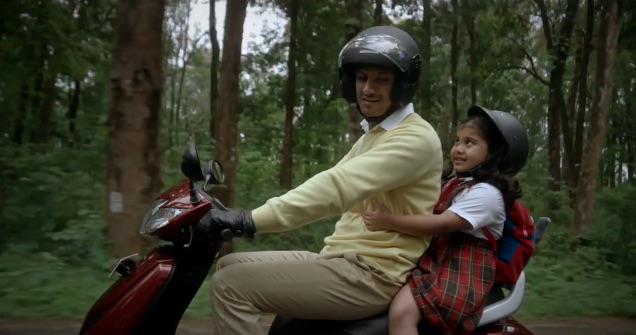 We see lot of TV ads everyday, only few ads make the difference and stands out. Here is one such TV ad from Honda 2 Wheelers for its very popular Activa 3G. The Activa 3G has become a easy-to-use daily driver for majority of 2 wheeler population in India. Often we might wonder Why Honda Activa so popular in India?, such is the craze for gearless scooters in India. As a commuter bike for day to day work, as a good carrier for luggages, as a fuel-efficient scooter, as an affordable scooter, things like this makes this bike very special for we Indians.

Honda Motorcycle and Scooter India (HMSI) has launched a brand new TVC featuring the very famous Honda Activa 3G. This 1 minute Honda Activa advertisement is a mass entertainer and is targeted towards all sections of audience. The music in the background is very cheerful, locations and the combination of Indian roads, bridge, train, train commuters, crowd , typical Indian railway level crossing, father dropping daughter to school, all the common things which happens in day to day life in India has been captured really well in this TV Ad.

We hope you watched the above Activa 3g ad. The new Honda Activa 3G packs all in one -Dynamic design , graceful tail lamp and 3D emblem logo. The tagline of Honda’s Activa range is Vah Vaah Vaaah!!!

What do you think about this new Honda Activa 3G Advertisement?

Check out the difference between Activa i vs Activa 3G vs Activa 125 and also see the new 2015 Activa i release.