New Tata Safari Storme to be launched at Rs 9.99 Lakhs by this month in India 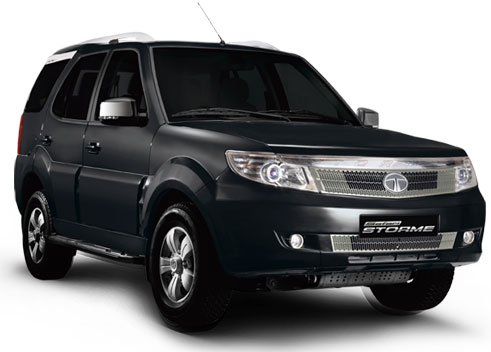 New Tata Safari Storme to be launched in India at Rs 9.99 Lakhs

Seems like Tata Motors is getting serious with its SUV business. Tata Motors has plans to develop 2 new global SUVs from scratch in collaboration with popular premium brands like Jaguar and Land Rover. The new global SUV models would be launched globally by the year 2017.

While the global SUvs are in Tata’s long-term plans – Facelift of TATA Safari Storme could be getting ready for a launch. Inside sources from Safari Storme has confirmed and commented that the launch of the new Tata Safari storme shall happen anytime later in this month.

The launch of new Tata Safari Storme facelift could snatch in few cookies from the new Mahindra Scorpio market.

Sources reveal that Tata Motors is working on creating a new viral campaign for its upcoming model, which could be possibly named as #AStormeIsComing. The all new Safari Storme is not too far away from its market launch.

The Tata Safari Storme facelift could be strategically priced at Rs 9.99 Lakhs.

Honda Most Trusted Bike Brand according to ET Survey