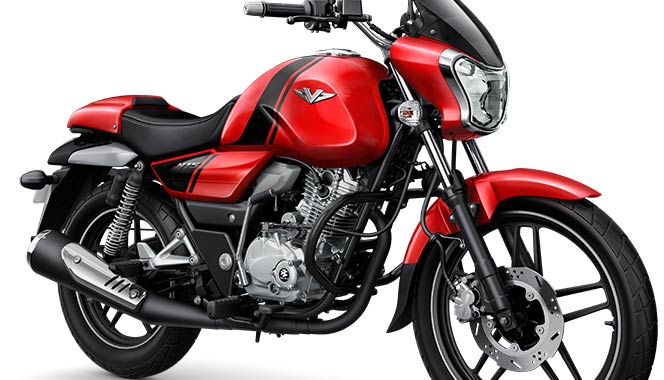 Bajaj Auto, India’s leading 2 Wheeler manufacturer will be introducing a new motorcycle to its “V” product line. Currently Bajaj has the V15 motorcycle in Bajaj V series. Reports on the Internet have revealed that the V brand will see an addition of new 125cc motorcycle that is going to be placed below Bajaj V15.

This new motorcycle by Bajaj is expected to get Bajaj V125 badge and will be powered by Bajaj’s existing Euro IV compliant version engine which is powered by Discover 125. However the engine will be a fine tuned version. Bajaj V125 motorcycle will be powered by 124.6cc single cylinder, 4-valve, DTS-i engine that comes with ExhausTEC. The engine churns out maximum power of 11 PS of power at 8000 RPM and 10.8 Nm of torque at 5500 RPM.

When it comes to appearance, the V125 is pretty similar to current Bajaj V15. One of Bajaj’s many USP for V15 was the presence of scrapped metal from “INS Vikrant” in the bike’s body. The upcoming Bajaj V125 too will be made of INS Vikrant metal. While the dimensions of this new 125cc motorcycle will be similar to Bajaj V15, the kerb weight is expected to be lesser than the current model.