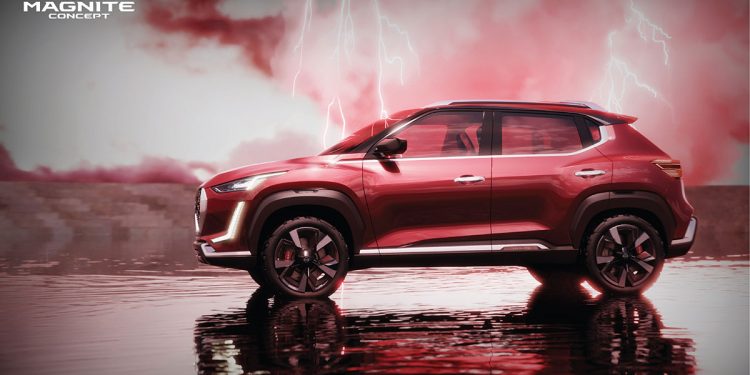 On July 16th, Nissan India revealed the concept model of is much awaited B-SUV. The all new B-SUV from the Japanese auto major is to be called as “Magnite“. The official launch of Nissan Magnite in India will happen in Financial year 2020 itself.

Nissan has revealed photos of Nissan Magnite B-SUV and it looks pretty interesting. A very revealing front grille, compact and well-designed car in a shiny red color. Whatever way you look at, the design of Nissan Magnite looks very promising.

What is Nissan Magnite?

What makes Nissan to call this concept car as “Magnite”? Magnite is a portmanteau of the words “magnetic” and “ignite”. Whereas magnetic highlights the design and the product attributes that will attract customers, ignite emphasises on the beginning of a new era that Nissan wants to bring in India.

Mr Rakesh Srivastava who is the Managing Director of Nissan Motor India said:

“The Nissan Magnite is an evolutionary leap in Nissan’s global SUV DNA. With cutting-edge technology onboard, it will be a game-changer in its segment. A bold offering in the sub-four-meter category, we are confident that Nissan Magnite will redefine the B-SUV segment for the industry. The Nissan Magnite is made on the philosophy of ‘Make in India, Make for the World’ and has been designed in Japan while keeping in mind the requirements and aspirations of Indian customers.”

The upcoming Nissan Magnite will be featuring a rich premium offering with stylish design for a strong and dynamic road presence.

Let us know what you think about Nissan Magnite concept by commenting below.