Okinawa, a leading electric two-wheeler manufacturing company with a focus on Make in India has announced that its first electric bike- Oki100, is going to be a 100 % localized product.

by Chethan Thimmappa
in Bikes, Okinawa
0 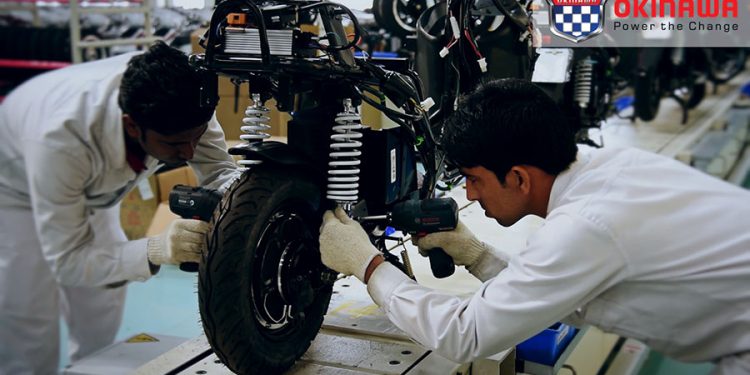 Okinawa, a leading electric two-wheeler manufacturing company with a focus on Make in India has announced that its first electric bike- Oki100, is going to be a 100 % localized product.  The brand has been promoting PM Modi’s vision of ‘Make in India’ in the Indian electric vehicle segment. In line with the same vision, Okinawa has shared that except for the battery cells, all the components of the upcoming Oki100 will be manufactured in India.

The much awaited electric bike- Oki100 will clock a top speed of 100 km per hour and have lithium ion battery base. The bike’s prototype was unveiled at Auto Expo 2018 and had received a unanimous praise from the attendees for its technical brilliance and aesthetics. The electric bike is due to be launched in the third quarter of the financial year 2021-21.

“We welcome PM Modi’s vision of ‘vocal for local’. To accelerate the same Okinawa has announced a 100 per cent ‘Make in India’ electric bike. Currently, Okinawa offers maximum localization of electric vehicles, which is 88%. With our upcoming electric bike, we are taking the localization level up to a 100 %. All the components of electric motorcycle will be manufactured and sourced from local suppliers. We expect this to boost local suppliers’ domain and inspire all the EV startups to go ‘Vocal for local’,” said Mr. Jeetender Sharma- MD, Okinawa.

The brand plans to provide its customers’ with a wide array of 100 per cent localized electric two wheelers. Oki100 will be the first product in this line. In order to accomplish the same, the brand will also be widening the local supplier base in India. Okinawa, which is also the first company to receive FAME 2 approval in electric two wheeler segment, aims to fuel the localization factor in the electric vehicle industry in India through its efforts and cutting edge technology.