by Nikhil Thorvat
in Bikes, TVS
0 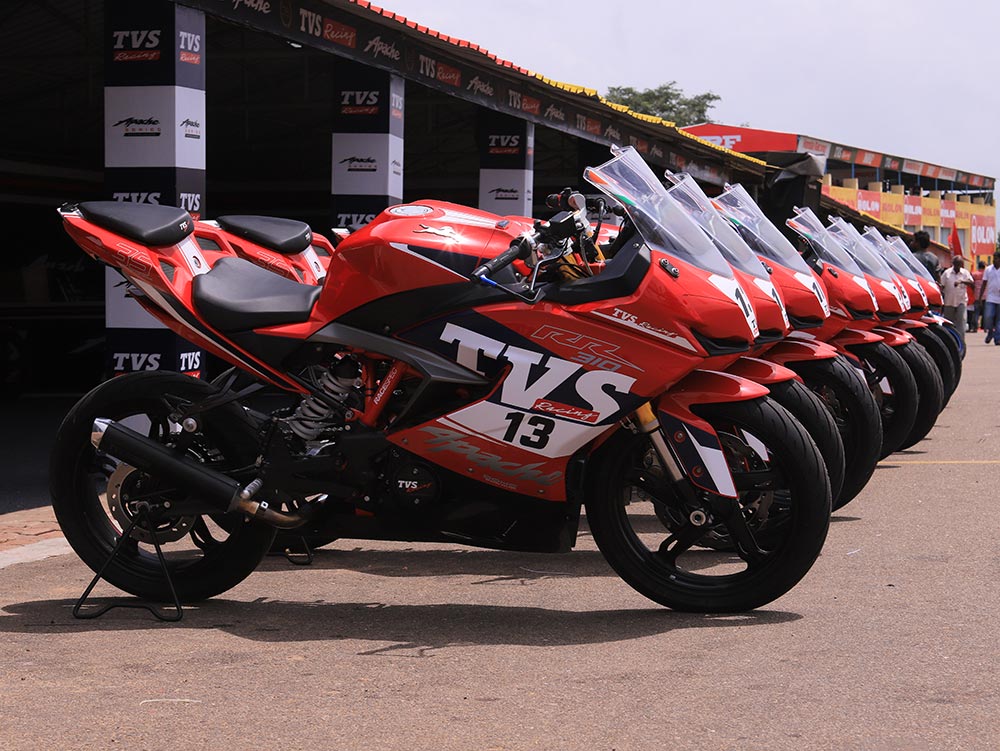 Have you ever been to a race weekend? I hadn’t, until TVS decided to give us a chance to not just be there and witness it, but to be a part of it altogether. When I say ‘to be a part of it’, I mean racing. Ask me how? TVS Young Media Racer Program!. Following our training in April, TVS kept their promise and invited us to witness the first round of the National Motorcycle Racing Championship held at the Kari Motor Speedway in Coimbatore. All we had to do was pack our bags and get set for two exhilarating days ahead of us.

We were welcomed at the Kari by roaring engines, lovely looking motorcycles and an enthusiastic crowd spectating the on going TVS One Make Women’s championship, round 1 at the Kari. Walk to our pits and there they stood, a fleet of TVS race machines which looked fantastic. TVS had made a few changes to their race spec RTR 200s and the changes include race stickers, a slipper clutch, race tuned cam shaft, re-tuned suspension setup and an optimized ignition system. Having Learned all this, it was now time to witness some racing action at the Kari. We were watching and learning as the championship races took place back to back and the atmosphere was truly electric until rain played spoilsport. The complete track was wet and all further races were delayed or pushed to the next day. 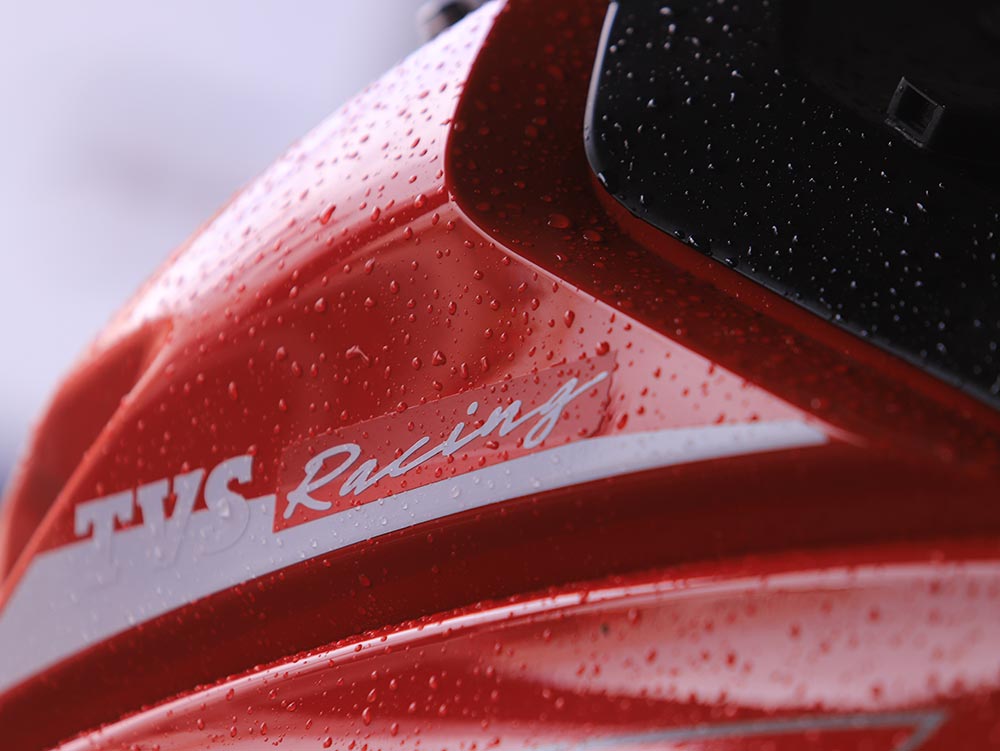 This meant our practice session scheduled for the day had to wait until the track was good to race on again. It did take a while but we did eventually get on the track. And soon as we did, I figured how responsive the throttle was and how light the front of the Race Spec RTR 200 2.0 felt. The track surface was wet and the bike was light because of which I did not push myself for the first couple of laps. Kari being a technical track needed some time to get used to and to get lines in place before I start pushing myself. Heck, the 15 mins we got on the track was worth every second we waited until we got on it. Yes, the track was slippery and all but this session and a track walk by TVS’s Harry Sylvester towards the end of the day helped us prepare well for the next day. 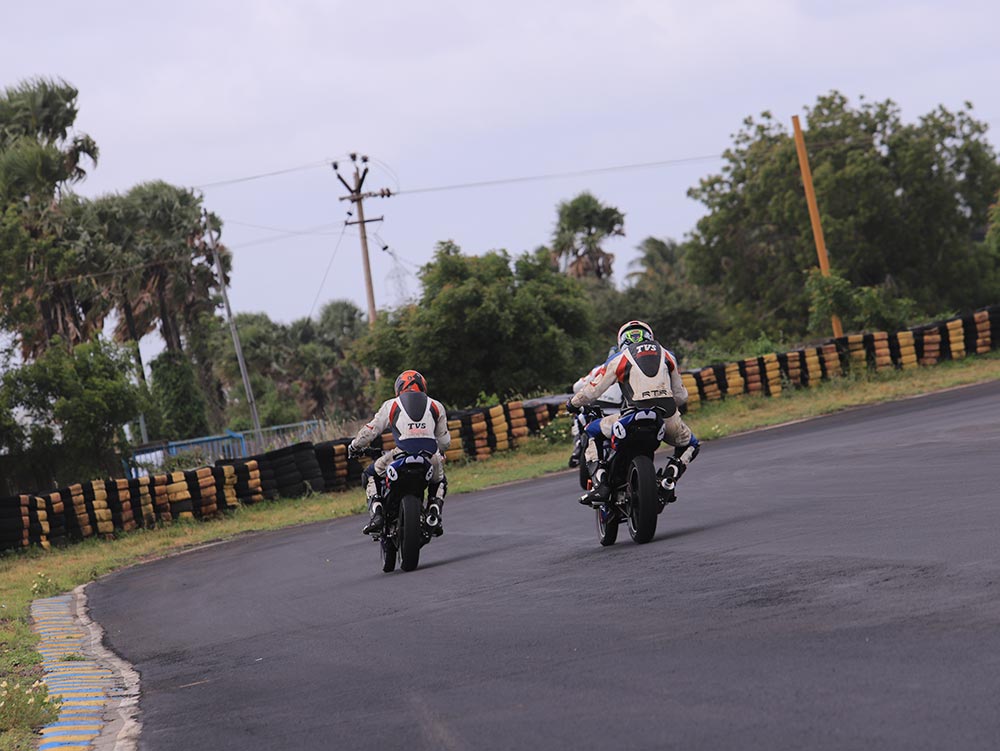 Come the next day and the weather was pleasant, atmosphere quiet and our race bikes being worked on for perfection. Our RTR 200s would be the second to go out on the track for the day and the gorgeous looking race spec TVS RR310 s were first. The RR310s looked so perfect, I dream riding one of them around the track someday. Coming back to reality, our qualifying was up next. Geared up, calm mind, optimistic, we raced onto the track. The track proved to be much better than the previous day which meant pushing hard to jump up a few positions. The bikes felt much much better than what they did the previous day and this did boost my confidence. Probably it was getting used to that made this happen. Result? 7TH on the grid. Not bad for a start. 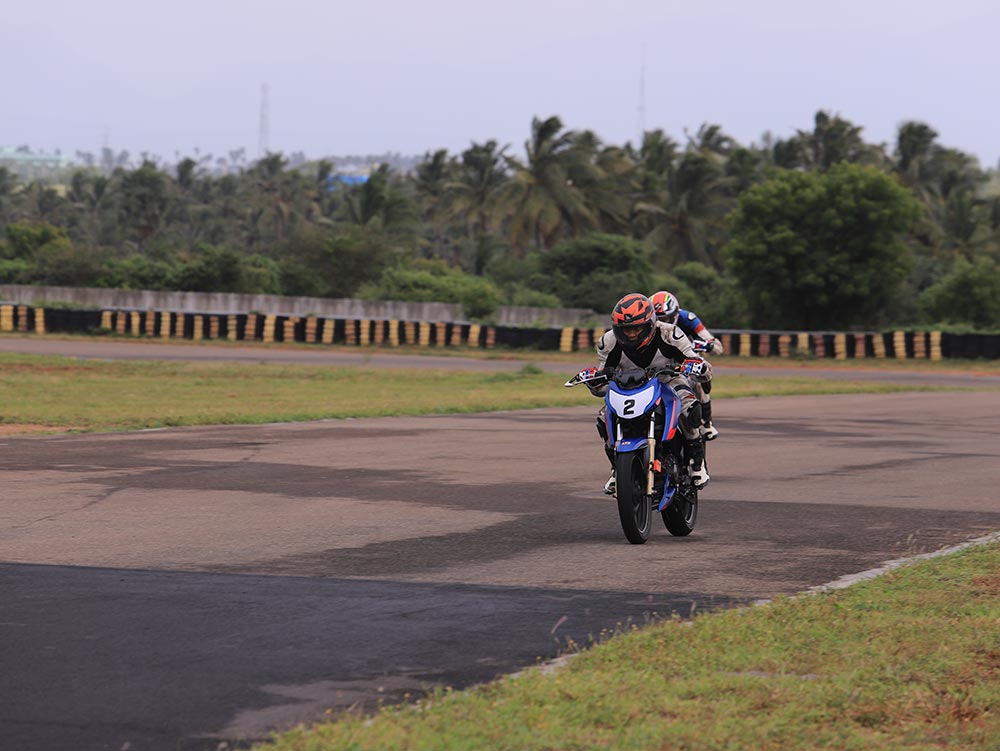 7th on the grid, 8 laps to go, head down, engines revving, red lights and GO! Had a great start, racing down the never ending front straight of the Kari, come the first corner and a couple of them go off track, but slow and steady, I keep my line and my position. I am now in 7th and intend to slowly move up when I get a chance. One thing about racing is, nothing ever hits your mind on a racetrack. The only thing you care about is going as fast as possible and trying not to crash while doing so. Every corner I went around, I could see skid marks and scrapes carved by crashed motorcycles and I hoped to god these didn’t consume me. 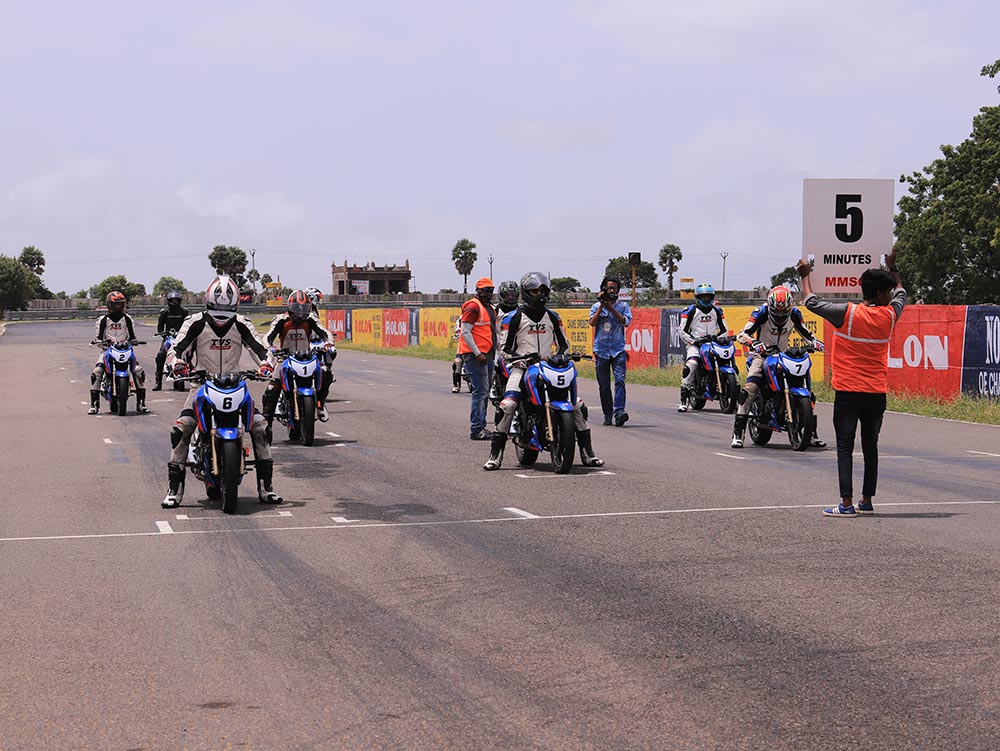 Concentrating on gaining position, I did manage to get past a competitor while going around the long right hander, famously known as the ‘Anaconda’ corner. Holding my 6th position, gaining speed lap after lap, enjoying the very feel of racing on a track, I managed to get closer and closer to the one ahead of me. 2 laps to go and I was right behind! One mistake and I would get past. I did not get a chance to get past him until the last corner of the last lap until we hit the left hander which got us onto the home straight, I ducked down, full throttle, gear up and while we almost finished the race, I raced past to gain a 5th. Grin! 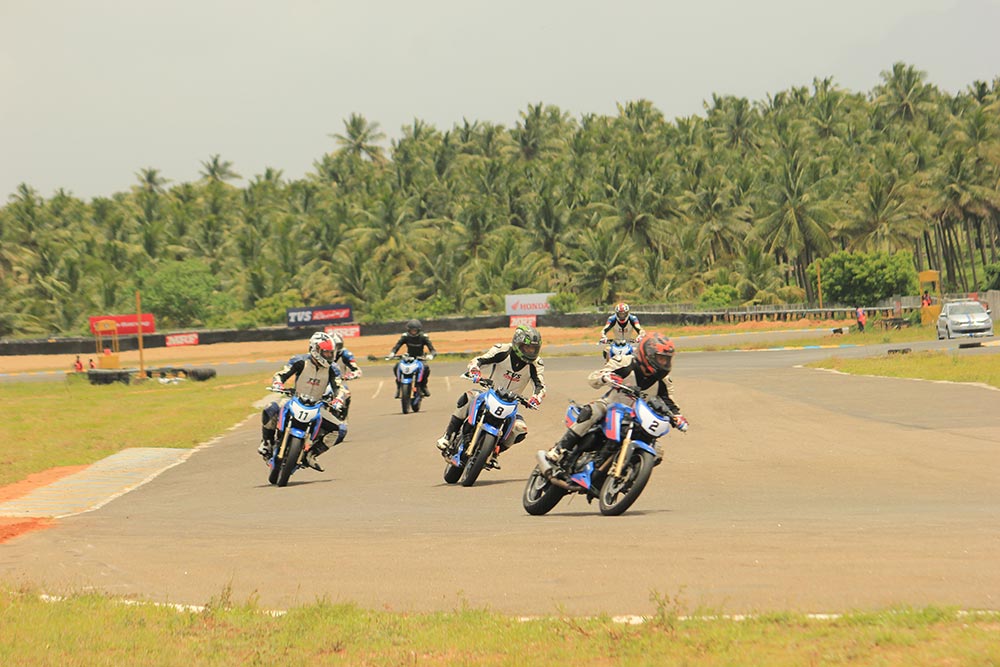 Getting back to the pits with smiles and a sense of joy. A race weekend is something amazing in itself. It’s time absolutely well spent. The pace mechanics work with, the engineering and competition that goes into it, the setup, preparation, responsibility and passion is what makes ‘MotorSport’ phenomenal in a country like ours. We witnessed something more than just a sport. We witnessed a future full of talent and a crowd full of support. We foresee a future where competition levels up and TVS is right there on top.