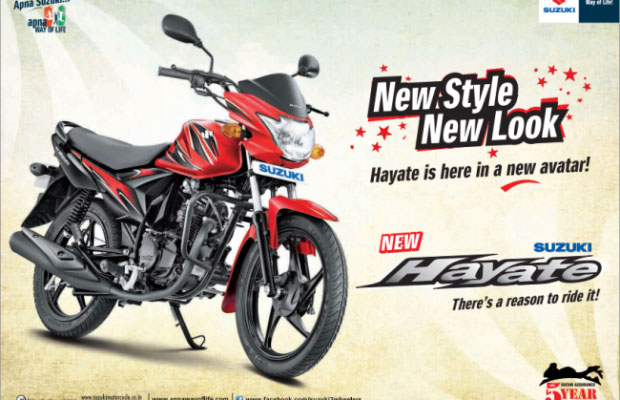 Seems like Japanese Two Wheeler maker, Suzuki has been updating its entire range of bike models and is preparing itself for the upcoming festival season. The 110cc commuter motorcycle from Suzuki is now set to receive further updates and mechanical changes although the 110cc engine power remains the same.

The new thing which you can find in refreshed Suzuki Hayate is the tubeless tires which is heading in for the very first time in this class. The tubeless tyres and multi-spoke alloys would bring a brand new change to the new motorcycle. Hayate would also be getting maintenance-free battery with a 5 step adjustable suspension system at the rear of the bike. The addition of new suspension system to the bike, helps in better ride quality even in varying terrains and different payloads.

When it comes to the look and feel of the bike, the refreshed Suzuki Hayate would now come with body colored side panels and the new decals as well. All these bells and whistles from Suzuki would certainly improve the looks of the new Hayate.

Overall, the upgrades list is not ground breaking or huge, but it is worth to talk about.

The new Suzuki Hayate would be made available across different Suzuki showrooms across India at a price-tag of INR 60,000 (on-road, Mumbai).