Revolt Motors is all set to increase its retail footprint with its 29th store in India after growing its presence in states like Tamil Nadu, Madhya Pradesh, Gujarat, and Kerala.

by PR Bot
in Bikes, Revolt
0 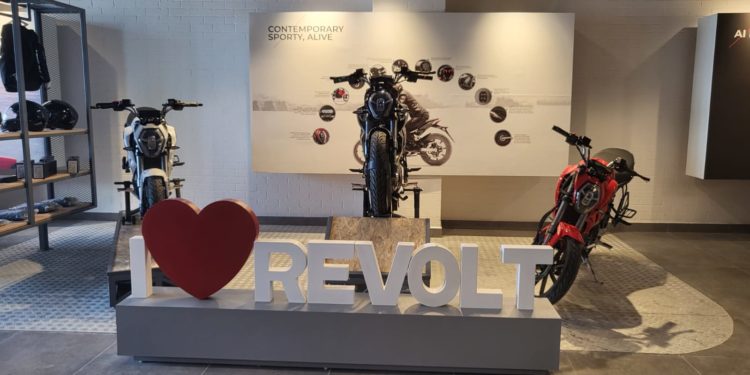 Revolt Motors, India’s next gen-mobility company today announced the opening of its store in Faridabad, Haryana. Revolt Motors is all set to increase its retail footprint with its 29th store in India after growing its presence in states like Tamil Nadu, Madhya Pradesh, Gujarat, and Kerala. Revolt Motors is actively extending its reach throughout India and plans to launch more than 40 new locations nationwide.

With government’s ongoing efforts to promote the adoption of EVs, the number of electric vehicles sold in India has increased significantly over the last five years. In terms of Haryana and their efforts to increase the consumption of EV’s in the state, a policy was announced earlier this year which aims to convert 100 per cent of bus fleet owned by state transport undertakings into electric buses by 2029.

The Haryana Electric Vehicle Policy-2022 comprises of bonanza of special discounts for electric vehicle manufacturers, so that they can also be inspired to make eco-friendly vehicles. According to the policy, capital subsidy will be given from the ‘fixed capital investment’ installed in a unit. Additionally, the first 20 units in the ‘Micro Industry’ category in the state to 25 percent of the ‘fixed capital investment’ or maximum of Rs 15 lakh – whatever will be lower, the capital subsidy it will be given. The Haryana government is not only looking at encouraging the consumption of EV’s, but also creating employment opportunities in the region. Adding on to the government’s efforts, Revolt Motors is all set to open their first store in Haryana located in A-6 Part A, Nehru ground, NBR, Faridabad Haryana – 122001.

Policies such as FAME India scheme and Niti Aayog’s ‘Battery Swapping’ policy has helped in gaining momentum towards sustainability and adaptability to environment friendly vehicles. Consumers have evolved and are now aware of the benefits of going electric, and expect electric bikes to offer an all-inclusive riding and ownership experience. At a time when consumers aim to go electric, Revolt motors takes pride in being a part of this sustainable revolution with its flagship bike RV400.

The RV400 comes with a 3KW (Mid Drive) motor, powered by a 72V, 3.24KWh Lithium-Ion battery that can churn out a top speed of 85km/h. The bike can be operated through the MyRevolt App, which offers connectivity features such as bike locator/Geo fencing, customized sounds that you can change with just a tap on the screen, complete bike diagnostics, battery status, historical data on your rides and KMs done, and also the option of locating the nearest Revolt Switch Station to swap your Revolt’s battery at and be on-the-move in less than 60 seconds.

RV400 features three riding modes – Eco, Normal and Sport – each suiting to the riding style and needs of the driver. Also, comes with Upside Down (USD) forks up-front and a fully adjustable mono shock at the rear to give an unparalleled riding experience.