Revolt Motors announced the further expansion of its retail presence in Southern India with the opening of their new store in Madurai, Tamil Nadu. This is the company’s first store in the city and it will be the 17th retail store across the country. 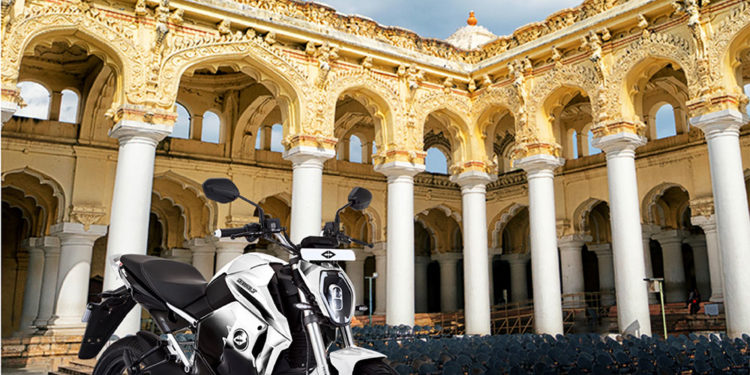 Revolt Motors, India’s next gen-mobility announced the further expansion of its retail presence in Southern India with the opening of their new store in Madurai, Tamil Nadu. This is the company’s first store in the city and it will be the 17th retail store across the country.

The Tamil Nadu govt. is offering state incentives to EV OEMs ranging from full reimbursement of state GST paid on vehicle sales to exemptions from electricity tax for manufacturing units and a 15-20% subsidy on land cost. There’s also full exemption from motor vehicle taxes for BEVs until 2022, as well as creation of EV parks in major auto manufacturing hubs and locations. Tamil Nadu also offers some of the best bike routes in the country and customers can now treat themselves to the hill ranges and seaside sceneries on their very own Revolt motorcycle.

RattanIndia backed Revolt Motors look forward tosuffice the increase demand of bikes coming its way from the buyers in these state. In order to fulfill the consumer demand, the company has plans to expand its sales network and strengthen retail presence further by entering 50+ new cities in India including Chandigarh, Lucknow & NCR by early 2022. Last week, Revolt Motors opened its first retail store in the West Bengal region in Kolkata. All the new stores will be set up by retail partners across the key cities

Revolt Motors has witnessed a phenomenal response from buyers for its flagship RV400 which was sold out within minutes of going on sale every time. In addition to this, the company is also leveraging AI, to upscale and provide an in-house developed contactless experience for its customers.

The RV400 comes with a 3KW (Mid Drive) motor, powered by a 72V, 3.24KWh Lithium-Ion battery that can churn out a top speed of 85km/h. The bike can be operated through the MyRevolt App, which offers connectivity features such as bike locator/Geo fencing, customised sounds that you can change with just a tap on the screen, complete bike diagnostics, battery status, historical data on your rides and KMs done, and also the option of locating the nearest Revolt Switch Station to swap your Revolt’s battery at, and be on-the-move in less than 60 seconds.

RV400 features three riding modes – Eco, Normal and Sport – each suiting to the riding style and needs of the driver. Also, comes with Upside Down (USD) forks up-front and a fully-adjustable mono shock at the rear to give an unparalleled riding experience.