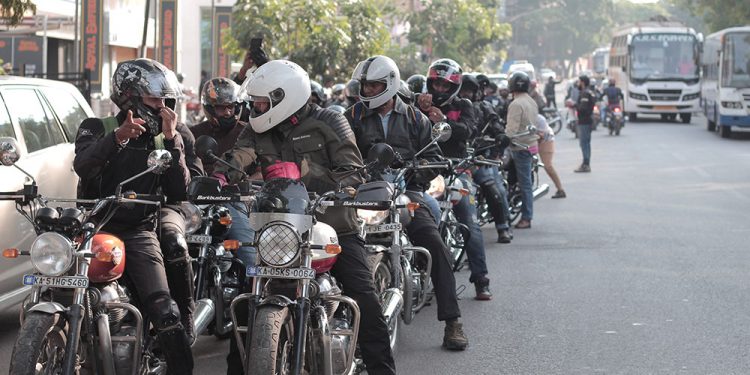 Royal Enfields are distinctly identifiable by their classic-themed, bare design, the inimitable ‘thump’ of the engine, and most importantly by the camaraderie and the fierce uniqueness of its riding enthusiasts. Redefining this emotion of the riding community, owners of the Royal Enfield Interceptor 650 in Bengaluru took to the city roads to demonstrate their love of riding and pride of ownership of India’s most celebrated mid-segment (250-750cc) motorcycle in 2018-19.  The Interceptor 650, Royal Enfield’s latest twin cylinder motorcycle was launched in November 2018 and was adjudged the winner of IMOTY in December 2018.

On a Sunday morning, more than 200 owners of the Royal Enfield Interceptor 650 gathered and rode to a private resort in Ramanagara to celebrate the Interceptor 650 winning the prestigious Indian Motorcycle of the Year Award (IMOTY) for 2019. After reaching the venue, the riders participated in an environmental initiative and planted saplings.

The IMOTY is the most coveted award for a two-wheeler manufacturer in India. Initiated in 2007, the award is given by a panel of leading motorcycle journalists and editors representing leading automotive publications in India. There is a tough selection and jury rounds where several parameters like price, fuel-efficiency, styling, comfort, safety, performance, practicality, technical innovation, value for money, and suitability for Indian riding conditions are particularly important factors while deciding on the winner. The Royal Enfield Interceptor 650 was adjudged the best amongst various other Indian and global motorcycles for the year 2019. Launched in November 2018 across the India, The Interceptor INT 650 is available across dealerships in Bengaluru, starting at Rs. 2,50,000 (ex-showroom) The motorcycle also comes with a 3-year warranty and Roadside Assistance service.

The rumbling cavalcade of the Interceptor riders was flagged off from the Royal Enfield store at HSR, Lalbagh at 7:30 AM. Once they reached the tree plantation venue at a private resort in Ramanagara, the riders were greeted by ‘Vigilante’ a beautiful custom motorcycle based on the Continental GT 650 by Rajputana Customs. The motorcycle was received extremely well by the customers.

The Interceptor INT 650 is Royal Enfield’s highly capable handsome ‘roadster’ motorcycle with comfortable upright seating position. The motorcycle has been inspired by 1960’s Interceptor – that became very popular in the American markets. Like the original Interceptor of the 60’s, the new motorcycle is as highly versatile and capable in the city as it is on the highway. With its comfortable and commanding riding position, extremely nimble handling, exciting torquey engine character, the Interceptor 650 is both fun and practical on all types of terrain, from curving coastal roads to the urban jungle, for heading out of town two-up or for cruising down to the beach.