In an effort towards driving salience and awareness for their riding gear, Royal Enfield recently launched an all-new campaign in partnership with their creative agency – Wieden+Kennedy India.

Inspired from real riding experiences, Royal Enfield’s protective gear offers riders the confidence to push their boundaries and venture further to all kinds of terrain and any kind of weather.

Royal Enfield has been making riding gear for sometime now, and the idea of this campaign was to increase awareness for this category and the versatility of the range that we offer. Ours is a country where one can ride pretty much all year round, and one needs the right Gear for it to manage in all weather and all terrains.

Our approach was to show the Royal Enfield Protective Gear being used by real Royal Enfield riders in actual places they ride to. The entire film has been shot from a riders’ perspective; from the sound, to the situations, and the cinematography. The point was to create a film that riders themselves can immediately identify and connect with, and showcase the seamless integration of Royal Enfield Gear into everyday and intense riding situations

Apart from conceptualizing and creating the campaign, Wieden+Kennedy has also directed the film in-house, in a first for the agency and the brand. 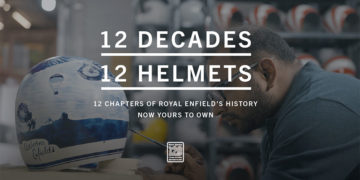