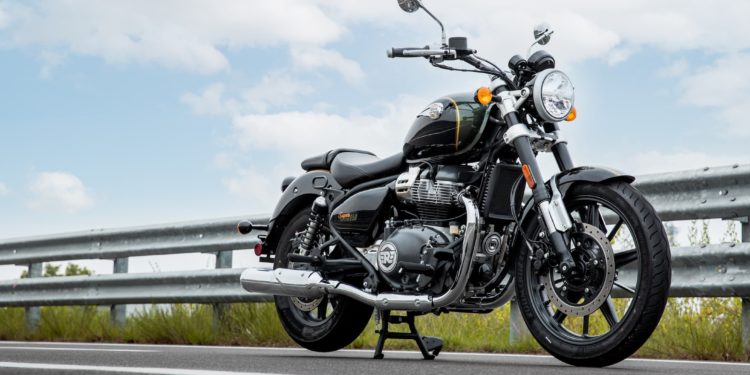 The Super Meteor 650 continues Royal Enfield’s heritage of building superlative cruisers. It is centered around the acclaimed 648cc twin platform that’s been rigorously tested and, since 2018, enjoyed worldwide recognition within the multi-award-winning Interceptor INT 650 and Continental GT 650.

“We have always had a differentiated approach to building motorcycles and our new cruiser, the Super Meteor 650, is the next evolution of this approach. Inspired by our own long distance riding experiences and those of our customers, we have built the Super Meteor to be absolutely enjoyable to all senses. The engine is super refined and responsive and offers relaxed part-throttle experience at highway-plus speeds, the riding ergonomics are fine-tuned to offer a leisurely, yet in-control riding experience, and the overall premium fit-finish of parts and materials evoke visual and sensory delight. The gorgeous silhouette and contours of the Super Meteor have been inspired by generations of cruisers from Royal Enfield, and are at the same time, familiar, yet absolutely distinct.”

A quintessential cruiser, the Super Meteor 650 combines uncluttered controls and instrumentation with relaxed rider ergonomics; rock-steady stability on the highway with spine-tingling pleasure on winding roads, where it keenly changes direction. Its flexible, silky-smooth engine has torque aplenty and its cool retro styling is infused with clearly recognisable Royal Enfield DNA.

Unintimidating and practical, the Super Meteor 650 has the silhouette of a purebred cruiser with a low stance and sumptuous seat with a narrow waist which combine to make munching miles a breeze. A large tank gives extended range and wide tubeless tyres on alloy rims provide dependability and peace of mind at highway speeds.

Speaking about the engineering that underpins the Super Meteor 650, Royal Enfield CEO, B Govindarajan, said,

“Even at the start of the development journey of the 650 parallel twin platform we were clear about our intentions of designing and building a true-blue highway cruiser. It’s been a while in the making but we are very glad that it is finally here. The 650 twin engine has been at the heart of the resounding global success of the Interceptor and the Continental GT 650 and we are confident that this platform, in a new cruiser avatar, will bring in new riders for Royal Enfield across the world.”

Over the years, Royal Enfield has made exceptional contributions to the cruiser category with exquisite motorcycles that have founded new, strong niche markets. Commencing in the mid-1950s, the company was decades ahead of the cruiser genre being defined when it produced US export variants of the original Redditch Super Meteor with what is today considered as a cruiser profile.

In the late 1990s, Royal Enfield was the first motorcycle company to introduce cruising culture to the Indian market with the release of Citybike, a single cylinder cruiser based on the legendary Bullet. This evolved into the Lightning 535, which during its time became the biggest and baddest motorcycle in India.

Royal Enfield’s cruiser lineage continued with the 2002 release of the first Thunderbird 350. Initially with an AVL Lean Burn engine, from 2008 onwards the Thunderbird was built around Royal Enfield’s seminal UCE platform. This was the motorcycle that encouraged tens of thousands of young Indian riders to go motorcycle cruising. The Thunderbird 500, the king of India’s highways, followed in 2012 and the Thunderbird X, a more youthful cruiser aimed at the urban rider, arrived in 2018.

Global success followed in 2020 with the launch of the Meteor 350 on the brand new J-series  platform. The Meteor 350 upped the tempo with new standards of finesse, quality and, most importantly, rideability. Equally at home in the city as on the open road, it has enjoyed a spectacular reception in European markets as well as winning the hearts and minds of riders across the world.

The Super Meteor 650 not only extends this proud ancestry of outstanding cruisers but takes it to the next level. Royal Enfield Chief of Design, Mark Wells, says it is the archetypal cruiser.

“Our goal was to create a motorcycle that captures the very essence of British cruisers. The design language is influenced by styles of the 1950s, including our own motorcycles, but with a contemporary twist. The Super Meteor 650 is a carefree motorcycle for riding until you decide it’s time to stop, for crossing immense, immersive landscapes, for heading towards the horizon’s vanishing point”,

As well as outstanding engineering and ergonomics, there is one aspect of the Super Meteor that will dazzle riders and, indeed, anyone who loves design: the consummate elegance of its unmistakable cruiser lines, epitomised by the shapely hourglass form of the motorcycle. Even when stationary it’s easy to imagine the summer evening air flowing freely over the streamlined form of the Super Meteor, and the miles ticking smoothly away beneath its wheels.

Riding position is one of the key differentiators of any cruiser and the Super Meteor nails this with fully feet-forward foot controls, a low scalloped seat and wide pulled-back handlebars, all of which meld to make the rider feel they are part of their motorcycle.

Created in conjunction with Harris Performance, the all-new chassis provides a low centre of gravity for high-speed stability and easy manoeuvrability that is confidence inspiring for all levels of rider. USD forks, LED headlamps, a state-of-the-art TBT navigation system, redesigned engine covers and a premium fit and finish are just some of the many attention-grabbing features.

The Super Meteor 650 has been created to allow its riders to break free from daily routines, to capture the romance of the open road, experience big skies and vast open landscapes and take them on journeys not limited by hours or kilometres.

Royal Enfield is confident that it will make believers out of non-believers, encouraging those who love motorcycling but with no experience or desire to ride a cruiser, to do just that – go cruising.