Skoda Kodiaq vRS will be launched with 237bhp 2.0 bi-turbo diesel

Earlier at Gaadikey.com, we had reported Skoda had officially released a teaser image of the Skoda Kodiaq RS . Development of the upcoming hot Skoda Kodiaq vRS is under process and the company has scheduled its launch later this year at the Paris motor show.

Skoda claims the Kodiaq vRS will have “lots of torque”.  Kodiaq vRS borrows its engine from The VW Tiguan 2.0 BiTDi BMT 240 4Motion which is capable of producing 240bhp and 369Nm of torque. These help the Tiguan accelerate to 100km/h in 6.5sec. The same engine is also likely to make it into the next Octavia vRS, which is due in 2020.

Skoda Kodiaq vRS is likely to get the four-wheel drive system from the Octavia vRS as standard, rather than being offered in front-wheel drive form with 4WD as an option.

It will be the second model in Skoda’s vRS line-up, which currently only consists of the Octavia vRS. The UK and Germany will be sales hot spots for the hot Kodiaq given that, in Britain, 20% of Octavia sales are of the vRS version.

Skoda has confirmed that the Kodiaq vRS will also get Dynamic Chassis Control – the VW Group’s adaptive suspension system used across high-end cars in the VW group. It’ll offer different drive modes, similar to the Octavia vRS such as  Eco, Comfort, Normal and Sport. It’s not yet clear if off-road focused drive modes will also feature. 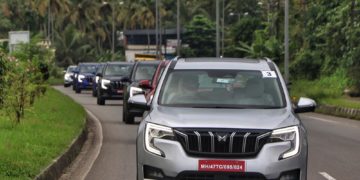