Japanese car maker, Toyota is now all set to launch its 2nd generation Toyota Innova with the “Crysta” branding in India. The launch of Toyota Innova Crysta is expected during the first week of May. This Multi-Purpose Vehicle (MPV) from Toyota is going to be sold in India in 2 engine and gearbox options, and will be made available in 5 trim levels.

The design of new Toyota Innova Crysta is significantly different from the current Innova model which is on sale. The new car is design loaded with many styling elements. Although, the car gets a different design it is still recogonisable as Toyota Innova.

The model also stands longer, wider and taller than the current car. Up front, the nose borrows styling cues from the current-gen Corolla Altis and Camry. The hexagonal grille is now wider and taller, and extends all the way to the base of the nose. The headlamps are double-barrel projector units with integrated LED daytime running lamps. 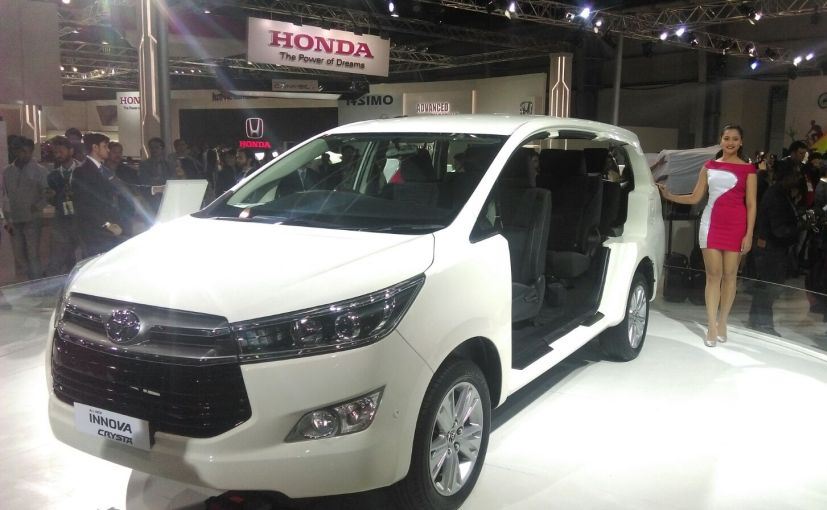 Under the hood, the new Toyota Innova Crysta is powered by a new 2.4-litre diesel engine that churns out a maximum power of 149 bhp and a peak torque of 343Nm of torque, the engine is mated to a 5-speed manual transmission gearbox. The automatic variant of new Innova Crysta gets a 2.8-litre diesel engine and delivers more power and torque features. The power delivered by Innova Crysta’s 2.8 litre engine is 174hp and torque output is 360Nm. The engine is mated to a 6-speed automatic transmission gearbox. Both the engine units are Euro 5 compliant.

The all new Innova Crysta gets a new ladder-frame chassis and independent front suspension similar to that of the old model, where as the rear gets a new 4-link setup.

New Innova Crysta is equipped with some of the modern systems like ABS ( Anti-lock braking system), hill descent control and electronic stability control.

Just like the changes which you see in the exteriors of new Innova Crysta, the new Innova’s interiors too receives dramatic changes. Innova Crysta’s interiors are better equipped, and built to an all-new standard with the use of varied surfaces, textures as well as the colors that enhances the visual appeal of the car.

The all new Toyota Innova Crysta is offered in 5 different trims or variants:

The new Crysta version of Innova gets more attractive design than than its predecessor, both on exteriors and interiors front. There is a rumour that the top trim of Innova Crysta would be priced above 20 Lakhs.

Let us know what do you think about new Innova Crysta by commenting below!

Lamborghini Huracan Spyder launch in India on May 5