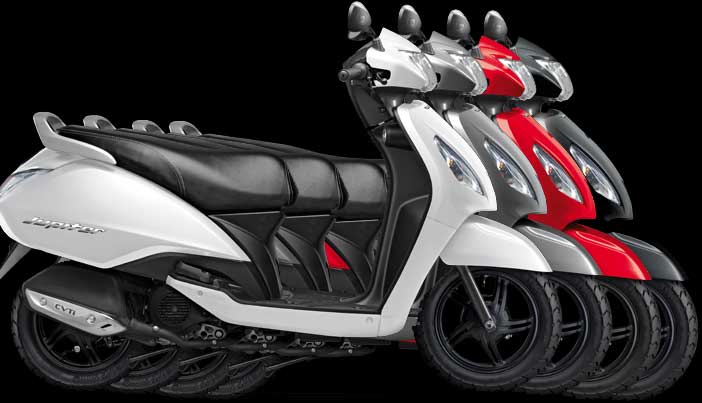 TVS Jupiter, scooter from TVS Motors has recorded a new milestone today by reaching a milestone of 5 Lakh unit sales. The crown was achieved within 18 months of its launch. All thanks to growing Scooter market in Indian 2 wheeler space – people prefer to buy gear-less scooters over geared motorcycles because of its ease of use while riding in the city roads within the traffic.

Talking about the specifications of TVS Jupiter, the scooter is powered by an all-aluminium, low-friction 110cc engine that produces a maximum output of 8.2 PS and a maximum torque of 8 Nm which is then mated to a CVT transmission. The Jupiter is released keeping the Indian male customers in mind, the scooter produces a mileage of upto 62 Kmpl.

Since its launch, Jupiter from TVS has significantly increased its popularity  over the time, the scooter has also been honoured as one of the top quality scooters in the JD Power India 2-Wheeler Initial Quality Study 2015.

Reaching the 5 lakh feet in mere 18 months is something which is not done by any other scooters in India.

With Yamaha Fascino, Yamaha aims to sell 30,000 units per month