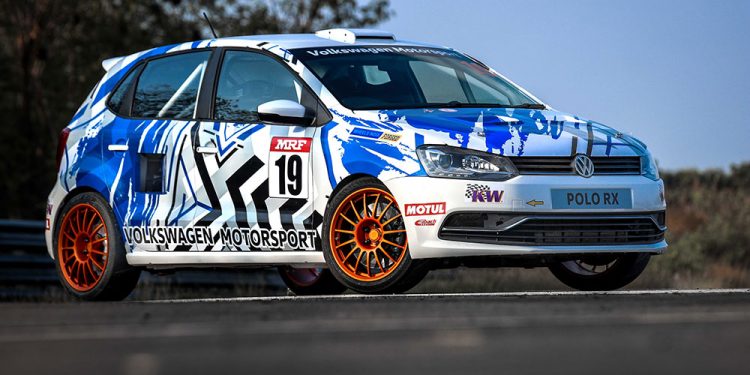 Volkswagen Motorsport India is all set to enter its 10th year in the country. The brand began its journey in Indian motorsport with the premium one make series Polo Cup in 2010. With a clear ambition to develop young talent in touring car racing, Volkswagen Motorsport set up a series based on their global platform where selected drivers from across the country were given equally-built race cars to compete against each other. This way, the top driving talent was identified through a complete season and promoted to higher racing series through proper coaching and streamlining sponsored opportunities at the international level.

Starting off with a 1.6-litre diesel car, Volkswagen Motorsport constantly kept moving forward by stepping up the performance of their cars. In 2012, the Polo Cup cars were upgraded from 130 PS diesel engines with manual gearbox to 1.4-litre TSI engines with DSG that produced 180 PS of peak power. The idea was to get closer and closer to the international spec touring cars so as to develop the Indian drivers for the bigger global challenges. In 2015, Polo Cup cars made way for the Vento Cup cars with the same drivetrain but a completely different chassis that was easier for new comers to get a hang of. The biggest step up for the programme came in 2017 when Volkswagen Motorsport India fielded Ameo Cup series with a car that was completely localised at the race shop in Volkswagen Pune Plant in Chakan. Powered with a 1.8-litre TSI engine and mated with a sequential gearbox with paddle shifters, this one was the most powerful car ever built by the Motorsport team with a peak power of 205 PS.

For the upcoming 2019 season, Volkswagen Motorsport India will continue with the Ameo Cup with cars running minor tweaks. The driver selection for the 2019 season has already been successfully conducted and the season will begin with pre-season testing, fitness camps in June followed by competitive racing at India’s all three racing circuits in Coimbatore, Chennai and Greater Noida.

After establishing the one-make series strongly in the country, Volkswagen Motorsport India started promoting different forms of motorsport in India by launching the Customer Sport initiative in 2013. Through this programme, the team started building rally Volkswagen cars for customers who wished to participate in the Indian National Rally Championship and supporting such private teams and individuals with technical know-how and making spares available at rally rounds across the country, thus eliminating the hassles faced while rallying with modern cars. Volkswagen Motorsport has opened up options for customers to customise their rally cars to their individual needs and offers cars for all three segments of INRC1, INRC2 and INRC3.

Taking Customer Sport programme further, Volkswagen Motorsport India started developing touring cars for circuit racing in the national championship in 2018 in the TC4-A class. The under-development Vento ITC race car won in its segment every time it participated in the 2018 season and even set the fastest lap time across segments at one of the occasions, thus setting a benchmark in circuit racing in India. Volkswagen Motorsport India will field its own cars in 2019 season to develop them further while also making them available for customers to who intend to participate in Indian Touring Car Championship.

Volkswagen Motorsport India team has grown by leaps and bounds in the last nine years. The team has gone from using cars developed in Germany to researching and developing cars from scratch in India with its own engineers. Between seasons, the team is always looking for new challenges during the ‘winter break’ and to mark its entry into the 10th year, Volkswagen Motorsport India decided to take the game to another level!

The team huddled and zeroed in on a ‘Winter Project’ car that was something different, special and completely out of the box to deliver an exciting car for the motorsport enthusiasts. This new car is beyond any limitation of racing regulations and that is what makes its apt for a track day. For the first time in India, Volkswagen Motorsport team has built a powerful, rear-engine, rear wheel drive Polo for ultimate adrenaline rush! The car, built in a Polo body shell, is equipped with Ameo Cup car’s 1.8-litre TSI engine and sequential gear box with paddle shifters.

The challenge of redesigning the entire drivetrain for the new configuration was an extremely tough task for the team. They started with creating the right mounts for the engine, gearbox and the suspension at the back. The turbocharged engine’s intercooler had to be placed underneath the rear seats. Further, special air ducts had to be installed to maintain air flow to the engine at the back. Similarly, special pipes and ducts to get the cooling and fuel system functioning had to be designed and built with extreme precision. With the intercooler occupying the designated space of fuel tank, the latter had to be moved to the front of the car and connect it to the engine at the back. A lot of development work went into designing the wire harness routing and systems integration.  In addition to this, quite a bit of development went into the suspension system to be able to get the car to handle the way the driver wanted.

Talking about the development that has gone into the car, Mr. Sirish Vissa, Head of Volkswagen Motorsport India said,

I am extremely excited about our ‘Winter Project’ car! It is commendable how the team has managed to pull off this project with limited access to high end software and technology. Young engineers and technicians in the team have shown real calibre by getting this masterpiece ready in less than three weeks!” He further added, “A rear engine, rear wheel drive car is tremendously different in terms of its performance as compared to our conventional front-engine, front wheel drive race cars. With the rear wheel managing the acceleration, the front wheels have more freedom to turn the car sharply and quickly, thereby enhancing its dynamic performance to a great extent.

The ‘Winter Project’ car is a special one-off build that can be bought by customers for track day purposes. Since the car does not fit in any racing regulations at the moment, it cannot be used for competitive purposes. In the future however, the car can be adapted to regulations to suit various forms of motorsports such as autocross, circuit racing or rallying.

Ford Teases 2019 Figo – Ties up with Tinder for Campaign