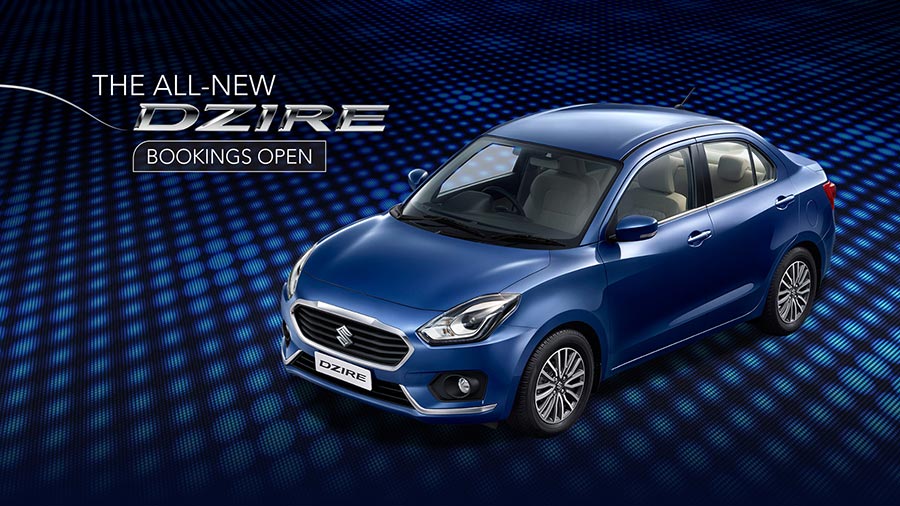 Maruti Suzuki, India’s largest car manufacturer will be launching the all new 3rd generation Maruti Dzire compact sedan tomorrow. The all new Dzire from Maruti Dzire will be based on all new Heartect platform – the same platform which is used in Maruti Baleno and Maruti Ignis. Because the 2017 Maruti Dzire is based on an entirely new platform the car will be significantly lighter in weight when compared to the outgoing model.

The 2017 Maruti Dzire which is going to be launched tomorrow will be getting pretty larger boot space ( 378 litres) as against to smaller bootspace of old Dzire (316 litres). The all new Maruti Dzire is powered by same engine as that of the older model . The third generation 2017 Maruti continues to power 1.2 litre, 4 cylinder, K-Series petrol engine which delivers 83 hp of power. The car will be also made available in the diesel version with 1.3 litre DDiS 190 diesel engine which churns out 75hp of power. Both diesel and petrol variants of Maruti Dzire will be powered by 5-speed manual transmission gearbox. The car will be also offered in AMT gearbox.

The base variants LXi and LDi shall get an option of AMT gearbox.

The all new 2017Maruti Dzire’s Z trim (ZXi, ZDi) gets features like:

The top trim Z+ of Maruti Dzire (ZXi+, ZDi+) gets top-of-the-class features like:

Expect the price of 2017 Maruti Dzire to be in the range of 5.5 Lakhs ( Ex-showroom Delhi). The official price has not been revealed yet and will be revealed during the launch tomorrow.