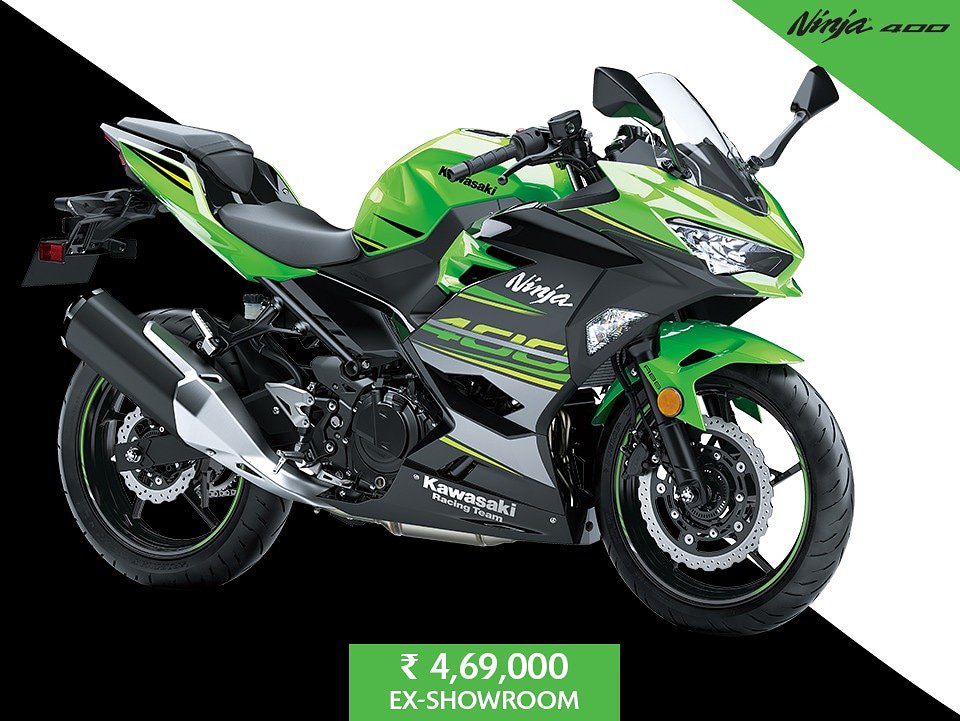 India Kawasaki has launched much awaited Ninja 400 in India for Rs. 4,69,000 ex-showroom Delhi. The lightweight, sharp-looking, high-performance, sport model offers excitement and ease of riding to a wide range of customers.

Clad in sharp new Ninja styling, the New Ninja 400 delivers greater performance than its predecessor care of all-new engine and chassis that are more powerful and significantly lighter. Not only does the Ninja 400 offer stunning, high-quality looks, its stronger engine performance, light, predictable handling and relaxed, sporty riding position make it both fun and easy to ride.

On the occasion of introduction of Ninja 400, Yutaka Yamashita, Managing Director of India Kawasaki Motors said

Ninja 300 is mainly made for beginners and Ninja 650 is popular among experienced riders. However, Ninja 400 fits the bill for those who are willing to buy a sports bike between 300 and 650cc.

On the technical front, the Ninja 400’s all new 399 cm3 delivers higher performance and controllability. The higher performance can largely be credited to the new downdraft intake, which is accompanied by a larger airbox offering increased intake efficiency. The smooth response and abundant low-end torque facilitate throttle control for new and experienced riders alike. The Ninja 400 also has a potential to compete with models having relatively higher power and engine capacity.

Few noteworthy elements like largest brake disc in class, more rigid front fork and sporty riding position
which can accommodate a wide range of rider sizes and riding situations make Ninja 400 very unique. Besides a cover for the radiator fan directs engine heat away from the rider, contributing to rider comfort. The new Ninja 400 boasts futuristic new Ninja styling inspired by the mighty Ninja H2. Chin spoilers at the bottom of the front cowl were inspired by the Ninja H2 and Ninja ZX-10R. LED taillight design inspired by the 2016 Ninja ZX- 10R contributes to the rear’s sharp impression. The Ninja 400 is equipped with the same instrument cluster as the Ninja 650, contributing to the high-grade feel of the tidy cockpit. In a nutshell, Ninja 400 has got many features inspired by its elder brothers.

With the introduction of Ninja 400 we have created a good family of Ninja series. As of now Ninja 400 will be available in limited numbers, because Ninja 300 is still our flagship model in India and it will be continued along with other Ninja models.

The Ninja 400 will be available in green colour which is a KRT edition and it will be assembled in Kawasaki’s factory in Chakan, Pune. Ninja 400 comes in the market with an exclusive launch offer for limited customers if bookings are done in April 2018. Customers can visit nearest dealership for more information