Even before the official launch on 15th March, 2019 Ford Figo Facelift was captured by a Youtuber. New Figo facelift gets advanced safety features and interiors 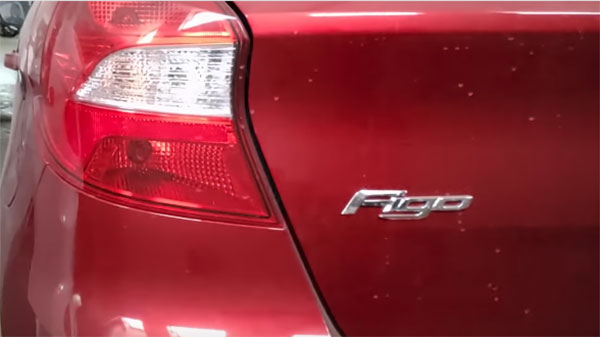 Figo is a well-known hatchback from Ford India. Ford will be launching the all new updated 2019 Ford Figo Facelift on March 15. Recently the company launched 2019 Ford Endeavour SUV and had also conducted off-road drives across India including Bangalore. Ahead of its official launch on 15th of March, a Youtuber has uploaded a walk around-video of new 2019 Ford Figo facelift in red color.

The facelift 2019 Figo gets slightly redesigned exteriors, something similar to what you seen in updated Ford Aspire. Front and rear bumpers of Figo looks different when compared to outgoing model. The car now features better honeycomb mesh grille, gets updated tail-lamps and headlamps.

Talking about 2019 Figo interiors – there are multiple changes in terms of how it looks and new features. Interiors look more premium when compared to old Figo and is more good than that of Freestyle with all-black finishing. New 2019 Ford Figo gets floating touchscreen (6.5-inch Infotainment system) that supports Android Auto and Apple Carplay.

The all new 2019 facelift version of Ford Figo gets similar ground clearance, boot space dimensions as that of the old Figo.

The car gets new type of alloy wheels but continues to feature small 14 inch wheels.

Watch the video of 2019 Ford Figo Facelift below:

The New Figo 2019 model facelift version is expected to be priced between Rs 5.5 Lakhs to Rs 8.5 Lakhs.

Some of the competitors of new Ford Figo include Hyundai Grand i10, Maruti Swift and Tata Tiago.