Kia updated the Seltos range with new features and has also added an iMT gearbox. iMT is offered lower in the range with the 1.5l petrol. Check out the review of 2021 Kia Seltos 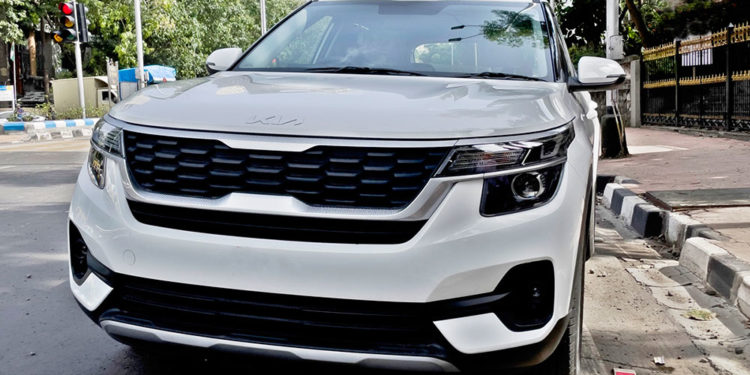 Kia India had a dream start with the Seltos. It is a well packaged SUV and till date sells strongly. That said the Hyundai Creta in its new generation form has given the car tough competition, not to mention new rivals coming in like the Skoda Kushaq and soon the Volkswagen Taigun. Hence, Kia updated the Seltos range with new features some time back but interestingly it also added in an iMT gearbox to its SUV. Now the iMT gearbox is something which only Korean car makers are now giving with the Hyundai Venue and the Kia Sonet. If you can notice, both these two are subcompact SUVs and the iMT is only offered with the 1.0 turbo petrol.

With the Seltos, the iMT is offered lower in the range with the 1.5l petrol. That is not the 1.4l turbo unit as the iMT version is said to be an affordable Seltos. The Seltos is also the only SUV to get an iMT and the only 4m plus SUV to offer one. Before we talk regarding that the 2021 Kia cars now have a new logo which we think looks quite good with its signature font and the fact that it blends in with the background.

The Seltos with the iMT is only available in the HTK+ variant which is lower in the variant range. To keep prices in check the iMT is not available higher up while the top-end variants get the DCT with the turbo-petrol.

Back to the iMT and the 1.5l petrol engine does not have the huge power output of the 1.4l turbo but it does make a decent 113bhp and 144Nm. Where an iMT feels different is when you starting driving it. You start the car in neutral and then operate the gearshift as like any manual car but the difference being that there is not clutch. It might sound weird but it is not so and it takes a few kms to get used to it.

It feels like any proper manual and it is not a full automatic like an AMT or any other kind of automatic gearbox. Few other things to note is that it is easier to drive compared to a manual. You cannot stall it for one while you can start it in second gear too. That said there is a warning given when you are using a gear too high or low. That said it will not stall. The process is very smooth and much better than an AMT. That said a proper manual is more fun but commuters will appreciate the iMT more for its convenience.

A proper automatic is faster but also more expensive and thirstier. Speaking of which the car we had was brand new while we saw 9/10kmpl but users can expect more. The Seltos iMT comes with a 1.5l engine and that engine is tuned for drive-ability more rather than outright performance. It is smooth and linear but not very fast. Again commuters and most who need a petrol SUV will not mind it. The HTK+ variant has a smaller touch screen but features available are decent while quality is also good. It has a different instrument cluster but again the cabin feels premium enough.

The best part is the price as this Seltos iMT variant is priced at Rs 12 lakh which is very good value. It is the only 4m plus compact SUV to have an iMT and it does make a difference to your commute with it being more relaxing. Hence you should check this out.