The Royal Enfield Continental GT650 is made for true motorcycle lovers who understands and appreciates the ride quality in every bit. This is for sure a masterpiece by Royal Enfield which certainly elevates and celebrates the passion for motorcycling 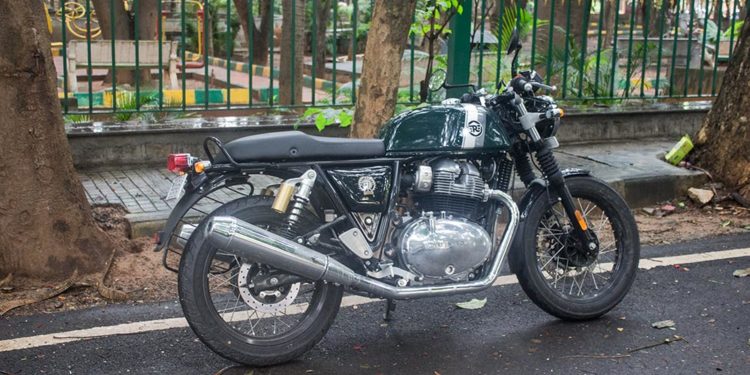 GT650 is the only motorcycle till date that made me absolutely confident in riding a two wheeler on highway fastlane without a second thought. I have ridden multiple premium and performance motorcycles, the GT650 is something special – it is a power factory on the go. It elevates the definition of motorcycle to a new level, the way it is engineered and built, the way it looks and the way it roars on the road. The Royal Enfield Continental GT650 motorcycle has been updated to feature latest BS6 compliant engine and what follows below is the review.

The Continental GT650 is based on Cafe-racer styled motorcycle, so its main DNA is its old-school looks. It features a simple round headlamp, a very minimal speedometer design and it stands next to you as a purest and original form of motorcycle. The unit which we got was in British Racing Green color, which is a great color to have on a motorcycle. The design highlights of Continental GT650 are the GT Twin emblem, unique and appealing fuel tank design, the nice looking dual exhaust pipes, the rear design and halogen headlamps.

When you are on the riding position you will notice the build quality of the motorcycle, shiny nice metal chromes on fuel lid and body, high quality switches and an urge to press the start button. Its not a machine which is light weight and where you can easily hop in – it looks simple but weighs 202 Kgs(without fuel), so you will definitely need some strength to sit and get started. The 2021 BS6 edition of Continental GT650 features side stand with engine-cutoff system – which ensures your safety. It makes you feel that you are an authentic motorcycle rider.

How it rides? / Performance

The moment you start riding this machine, you would entirely separate from the world and get into a special zone. It feels like you have been suddenly upgraded and has been granted enormous power. The engine noise from GT650 is just amazing and it sounds like a jet when you de-accelerate. I now understand why the motorcycle is so heavy, it is to keep you stable, up and going when are you in this special riding mode. I rode this motorcycle on some great surfaces which connects the airport. There is no curve which i have not enjoyed. Every new curve, every new corner is an opportunity for you to experience the release of power. You will attain a state where you become fearless and I bet no car-ownership or no EV-ownership would let you experience the greatness and thrill of riding. If you love riding, I would strongly suggest you to take this motorcycle for a spin and test it for yourself.

Getting back to the review of GT, the motorcycle attains maximum speed in no time. A very good acceleration and you will not notice how quickly you passed 60Kmph, 80Kmph and 100 Kmph. I did not test the maximum speed, but it was about 120Kmph, when i noticed the motorcycle was going on and on with no signs of slowing down nor vibration. A big bow to Royal Enfield team for building such reliable machines, which listens and respects the riders ego. The faster it goes, the tougher and harder the brakes should be. When you are riding a motorcycle, one reason you may not accelerate much is because you fear if your brakes cannot cut-off that rush. While riding a GT650, you will be fully in control whatever speed you are in – thanks to ABS and whatever technology which has gone inside in building this braking system.

Powered by 648cc 4-stroke parallel-twin engine, the Continental GT650 gets Fuel-Injection ignition system(Fi). This mighty engine is mated to a 6-speed manual transmission gearbox and oozes out 47 bhp of power and has a maximum torque of 52Nm. The Continental GT650 gets ABS on both of its wheels, misses out on dedicated Royal Enfield navigation system which you find in Himalayan and Meteor. There are are 5 different colors offered: British Racing Green, Dux Deluxe, Ventura Storm, Rocker Red and Mr Clean. The suspension system in GT650 is great, thanks to 41 mm front fork, 110 mm travel suspension in the front and Twin coil-over shocks, 88 mm travel suspension at the rear. The motorcycle features a dedicated engine kill switch. The fuel tank capacity of GT650 is 13.7 litres which is good enough for long rides.

The updated BS6 2021 Royal Enfield Continental GT650 is priced at Rs 2,98,079 (Ex-showroom Delhi). It is the price which you have to pay to own a machine that knows no limits. The GT650 is made for true motorcycle lovers who understands and appreciates the ride quality in every bit. This is for sure a masterpiece by Royal Enfield which certainly elevates and celebrates the passion for motorcycling.