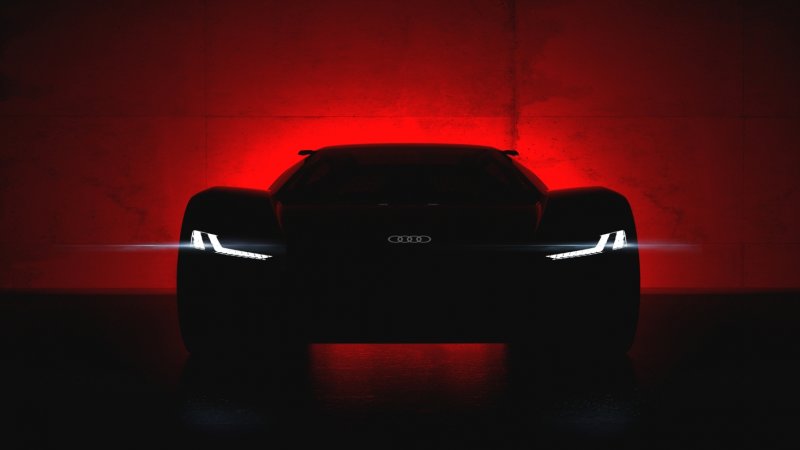 Audi plans to reveal an electric supercar concept called the PB 18 e-tron on the 23rd August at the Laguna Seca racetrack. The name is an abbreviation for the venue where it will make its public debut – Pebble Beach – and the year of its debut that is 2018.

The electric supercar concept recalls the famous LeMans-series winner Audi R18 e-tron, says the German carmaker. The styling of the concept was developed at the new Malibu Design Loft. The single teaser image shows a low-slung prototype with flared wheel arches and massive wing at the back.  The sleek LED headlights seen in the teaser are unlike the ones seen on the new crop of Audis. Even the grille might differ from Audi’s product line-up.

No powertrain details are available at the moment except that it will be fully electric. The PB18 E-Tron could be our first view of Audi’s secretive supercar project – codenamed Scorpion. It was rumoured earlier that the Scorpion supercar was powered by a 1,000 horsepower V8 fitted with a Desmodromic valvetrain scrounged from four 1.2-litre Ducati motorcycle engines. However, with the speculations of R8 being shelved for good, there were also reports of mothballing this ambitious Scorpion project. But with the electrification push, Audi might have decided to replace the Scorpion’s powertrain with VW Group’s powerful electric motors. And the same can be seen in the form of the PB18 E-Tron.

Tesla To Add Party And Camper Mode To Thier Models