Bajaj Pulsar AS200 to be launched today

by Chethan Thimmappa
in Bajaj, Bikes
4 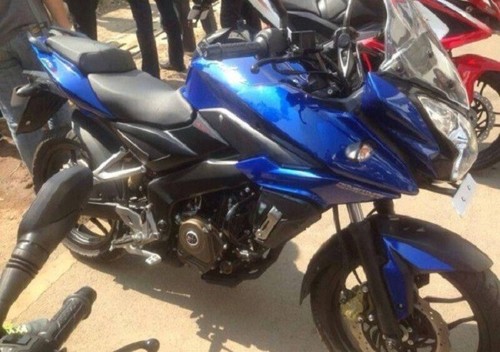 Bajaj Auto. Indian 2-wheeler manufacturer has been very aggressive with its launch play. The company is set to launch yet another bike called Bajaj Pulsar AS200. Just in last month, Bajaj Auto launched Pulsar RS200 bike that attracted over 1000 bookings in the very first week of its launch.  Pulsar enthusiasts have one more reason to smile – Bajaj Auto is introducing a new range  -The Adventure Sports series. Bajaj Pulsar AS200 is going to be the first one in the new Adventure Sports series from Pulsar.

Bajaj Pulsar AS200 to be unveiled today

Bajaj Auto is depending heavily on Pulsar AS200 to continue the good fortunes of Bajaj Pulsar RS200. The Pulsar AS200 motorcycle has already been spotted across different locations across the world – Turkey and Indonesia.

Talking about the looks and appearance of Pulsar AS200, the motorcycle comes with projector headlamps and quarter fairing just like that in Bajaj Pulsar 220. The Pulsar AS200 bike by Bajaj Auto would be powered by a 200cc engine which is capable of producing a maximum power of 23 BHP and a maximum torque of up to 18.3 Newton meters.

Price of Bajaj Pulsar AS200

The price of Bajaj Pulsar AS200 has not been announced yet. The Price of Pulsar AS200 would be revealed once it is launched today.

2 wheeler analysts have said that Bajaj Auto is projecting its full efforts to regain the lost ground from financial year 2014. Along with Bajaj Pulsar AS200, the company might launch other models in 150cc range as well