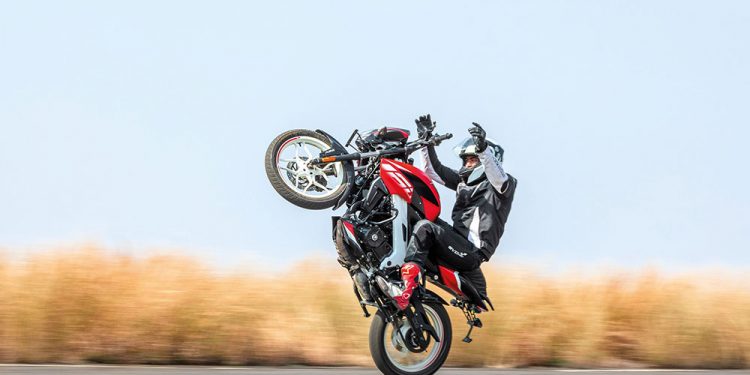 Bajaj Pulsar NS160 created history by breaking the world record for the longest no-hands wheelie entering the India Book of Records and Federation of Motor Sports Club of India (FMSCI). With road tester Hrushikesh Mandke on the saddle, the record was set in the presence of a senior representative from FMSCI and an adjudicator from the India Book of Records. The no hand wheelie was executed with a record 186.8 meters breaking the existing world record of 89 meters.

The Pulsar NS160 from Bajaj Auto was chosen for it is light, strong and powerful attributes. The NS160’s powerful engine delivers 17.2 PS of raw power that helped Hrushikesh Mandke set a good time. The patented DTS-I twin-spark fuel injected engine offered the bike smooth throttle response giving him complete control throughout the attempt. The perimeter frame with its high stiffness provided stability balance and control even on one wheel of the Pulsar NS160.

“The Pulsar 160 NS is the epitome of power and performance and it was the perfect choice for me to attempt this feat. The bike is light enough to manage a no hands wheelie, but at the same time a strong frame to deliver control, and of course powerful to easily initiate and maintain the wheelie.  It is a proud moment for me be a part of another record-breaking event with the World’s Favorite Indian.”

Hrushikesh had also recently created another record with NS 200 for the fastest quarter mile wheelie in 23.68 seconds.

The record was attempted on an airport runway which was blocked-off for the record attempt. All the necessary safety protocols were laid down by some of the country’s finest and most experienced automotive journalists and road testers. The Bajaj Pulsar NS 160 used to set the record was in original showroom stock condition. A special waiver was requested for and obtained from the steward for removal of the number plates and the rear mudguard to avoid scrapping the tarmac while performing the wheelie.

All the necessary safety protocols were followed and most importantly, the rider was wearing DOT and ECE certified helmet and CE certified safety gear from top to bottom, and the same was verified by the stewards. The distance was marked and the record validated using Racelogic VBOX Performance Box GPS-based data logging equipment, which is ARAI-certified.

The complete video of the record can be seen online on Bajaj Pulsar’s YouTube channel.