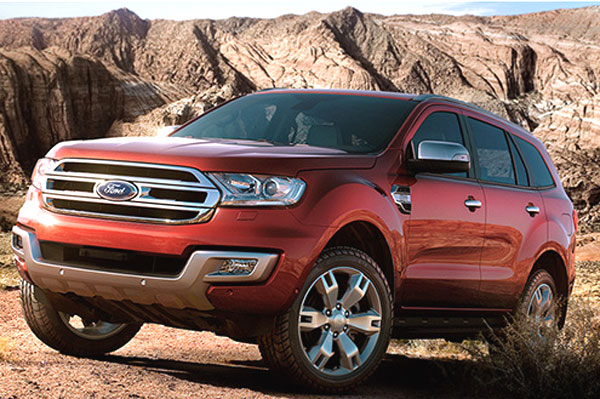 Endeavour from Ford is an SUV which is based on Ranger Pickup which is present in the international market. Ford Endeavour would have some differentiation when compared with its predecessor. The all new Ford Endeavour comes with huge trapezoidal griller, large wheel arches and some significant tweaks in its wheels that gives a prominent SUV look. Other design elements of Ford Endeavour include day-time running lights, an aluminium front and rear scuff places other than this the SUV retains same concept and design as that of its predecessors. Ford has also begun testing the next generation Ford Endeavour in India that comes with chrome alloy wheels.

This new SUV car, Endeavour from Ford is going to take on its competitors in its segment like Fortuner, Pajero Sport, Hyundai Santa Fe and the SsangYong Rexton.

The quality of cabin present in the new Ford Endeavour has been significantly improved. The outer body of the car does look inviting when check the pictures. Endeavour’s dashboard and central screen, is in sync as well. The Top-end model of Ford Endeavour gets an 8-inch touchscreen system with Ford’s infotainment system called SYNC 2 that comes along with satellite navigation and a rear view camera.

The India-specific Ford Endeavours shall get a seven seat configuration with quite large front seats, there will be flat folding seats in the second row as well as the third row (as standard). Talking about the cabin space of new Endeavour, it is expected to be better than its predecessor.

Two engine and transmission options are expected to be offered — a 2.2-litre 148bhp and a 197bhp 3.2-litre diesel. The former is likely to be paired to a 6-speed manual gearbox and the bigger engine is likely to come only with a 6-speed auto. An array of safety and assistance systems such as start assist, assist to control ascent, descent and curve when on a hill, a warning system for lane departure, a system to indicate blind spots, adaptive cruise control and ESP are also to be included.

Ford would stick to an aggressive pricing strategy for the new Endeavour and it can be priced anywhere starting from 18 lakhs. The new Endeavour certainly looks like the best ever Endeavour yet from Ford, and has all the qualities to become a success in India.