Ducati today announced the launch of the Panigale V4 SP in India. The Ducati Panigale V4 SP is priced at INR 36.07 Lacs (Ex-Showroom India), and bookings are now open across all Ducati dealerships 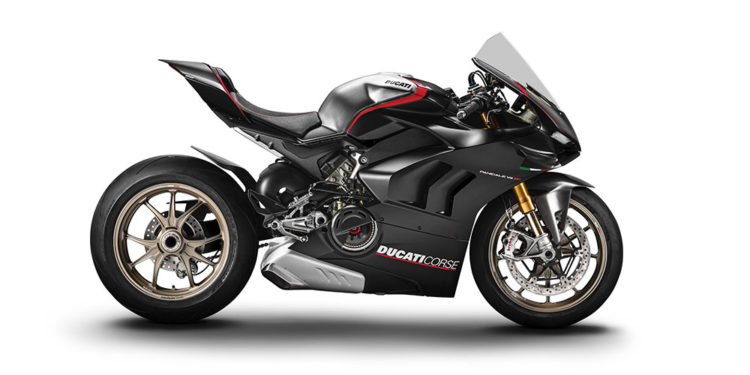 Luxury motorcycle brand Ducati today announced the launch of the Panigale V4 SP in India, which certifies the return of the initials “SP” (Sport Production) on the fairing of a Ducati super sports bike, after many years. The Panigale V4 SP is priced at INR 36.07 Lacs (Ex-Showroom India), and bookings are now open across all Ducati dealerships in Delhi – NCR, Mumbai, Pune, Ahmedabad, Hyderabad, Bengaluru, Kochi, Kolkata & Chennai, with deliveries starting immediately.

Introduced for the first time on the legendary Ducati 851, this abbreviation identified the versions that formed the basis for development of racing bikes used in the Sport Production Championship, a precursor of the current Superstock. Even today, in Ducati, the acronym “SP” is used to recognize a production bike with specific technical equipment that makes it faster on the track.

Consistent with this philosophy, the Panigale V4 SP differs from the Panigale V4 S with a dedicated livery, steering head machined from billet which shows the progressive number of the bike, equipment enriched with chassis contents and the engine designed to increase its dynamic performance when used on the racetrack.

“We’re glad to be expanding the Panigale family in India with the introduction of the all-new Panigale V4 SP, the top-of-the-range Panigale model, which now comes marked with the revered SP moniker. The Panigale V4 SP is a distinct machine thanks to its dedicated and exclusive “Winter Test” livery, Dry Clutch, Forged Magnesium wheels and the Stylema brake calipers, and is built for those who want the absolute best on the racetrack. It’s exciting that something as fast and involving as the Panigale V4 SP is now available for the track day enthusiasts in India and we look forward to seeing it at the BIC, and the MMRT soon!”

Essential and fascinating, the “Winter Test” livery that characterizes the bike is inspired by that of the Ducati Corse bikes used in the pre-season tests of the MotoGP and SBK Championships. The matt black of the fairings, combined with the Marchesini Forged Magnesium Wheels, contrasts with the bright red accents and the shine of the exposed brushed aluminium tank, and gives a truly professional look to the bike.

The Desmosedici Stradale engine of the “SP” is equipped with a dry clutch, which is essential to be effective on the track when riding to the limit, and is coupled to a final drive with a 520 pitch chain, which is lighter than normal.

The equipment of the Panigale V4 SP is completed by the adjustable rider foot pegs in billet aluminium that allow the rider to find the optimal position in the saddle, by the carbon front mudguard and by accessories that can be used on “track days”, such as the open carbon clutch cover, caps for removing the license plate holder and mirrors, as well as the Ducati Data Analyzer + (DDA +) telemetry kit with a GPS module that allows you to professionally analyse your performance on the track.

Thanks to its technical equipment, the Panigale V4 SP is the ideal bike for anyone who wants to hit the track and go fast immediately. The quality of the bike under braking is extraordinary, as is the lightness in going into the lean and the tendency to close the line. An amateur rider on the “SP” will be faster than if he were riding the more demanding “R” version.

The Panigale V4 SP is powered by the 1,103 cc Desmosedici Stradale engine, a 90° V4 with Desmodromic distribution derived from MotoGP, unique in its kind for the counter-rotating crankshaft and “Twin Pulse” firing order. The engine is capable of delivering 214 hp of power at 13,000 rpm, and 12.6 Kgm of torque at 9,500 rpm.

The 90° V4 of the Panigale V4 SP uses an STM EVO-SBK dry clutch, made from billet aluminium. Compared to the wet clutch of the Panigale V4 S, the dry clutch guarantees a more effective anti-hop function, even in the most aggressive downshifts during extreme use of the bike on the racetrack. The assembly of the open clutch cover made of carbon fibre, included in the supplied equipment, gives the classic metallic noise loved by all Ducatisti.

In terms of chassis, the Panigale V4 SP is equipped with state-of-the-art technical content such as Brembo Stylema Callipers and Brembo brake pump with MCS system. Added to these are the adjustable aluminium rider foot pegs with carbon heel guards and the billet steering head with the progressive number of the bike.

The wheels of the Panigale V4 SP are Marchesini Forged Magnesium Wheels which offer a significant reduction in rolling inertia to give an advantage of agility and lightness in changes of direction.

The rider foot pegs are made of high quality anodized aluminium alloy which maintains its original appearance over time. In addition to being a pleasure for the eye, these foot pegs allow the rider to find the position that best suits his build and riding style. They are equipped with carbon fibre heel guards and articulated brake and shift pedals to minimize the risk of breakage in the event of a slide and designed to quickly switch between traditional and GP style shifting configurations.

Like the Panigale V4 S, the SP version is also equipped with an Öhlins NIX-30 fork, Öhlins TTX36 rear shock absorber and Öhlins steering damper controlled by the second generation Öhlins Smart EC 2.0 system. The main advantage of this system is the possibility offered to the rider to customize the intensity of intervention on the suspension according to individual riding phases (braking, cornering, and acceleration). In addition, it allows the rider to have a softer basic setting and therefore easier and less demanding than that of a traditional suspension, stiffening instantly only when necessary.

The Panigale V4 SP is equipped with a state-of-the-art electronic package, based on the use of the 6-axis Bosch inertial platform which includes controls for managing all phases of riding.

The operating parameters of each are managed through the new Riding Mode strategy introduced on the Panigale V4 MY2021 range which allows the rider to make quick comparisons on the track between two different configurations to define the best set-up. The Race Riding Mode has in fact been split into two specific mappings for track use (Race A and Race B), now freely comparable in the individual parameters, alongside the already existing Sport and Street.

The Panigale V4 SP also incorporates the new strategy contained in the Ducati Traction Control EVO 3 (DTC EVO 3), developed for MY2021. This strategy intervenes during the throttle reopening phase in the middle of the corner, with the aim of gently managing the clearance recovery of the Desmosedici Stradale, so as to make acceleration out of corners easier and more predictable.

All the information necessary for riding is displayed on the high-resolution 5″ full-TFT colour dashboard which through an intuitive interface also allows you to adjust the settings of the individual controls.

The Panigale V4 SP is equipped with the Ducati Data Analyzer+ (DDA+) kit with a GPS module. The Ducati Data Analyzer+ (DDA+) is a telemetry system, comparable to those used in racing competitions, which consists of a device for data acquisition via CAN line, and an analysis software for Windows and Mac PCs inspired by the professional applications.

The device stores vehicle usage parameters such as trajectories, RPM, gear, throttle opening angle, engine rpm, front brake pressure, DTC etc. and geolocates them on the route. Once disconnected from the bike and inserted into the USB port of the computer, the software allows you to analyse your performance on the racetrack.

The Panigale V4 SP also stands out for being equipped with contents derived from the Superlegerra V4, such as the lightweight Marchesini Forged Magnesium wheels, the exclusive Stylema Callipers and the Brembo front brake pump with MCS (Multiple Click System) and “remote adjusting” device.

* This product is designed for vehicles used exclusively in closed circuits. Use on public roads is prohibited by law.