Ducati Streetfighter V4 SP is priced at Rs 34.99 Lacs (Ex-Showroom India), and bookings are now open across all Ducati dealerships in Delhi with deliveries starting immediately. 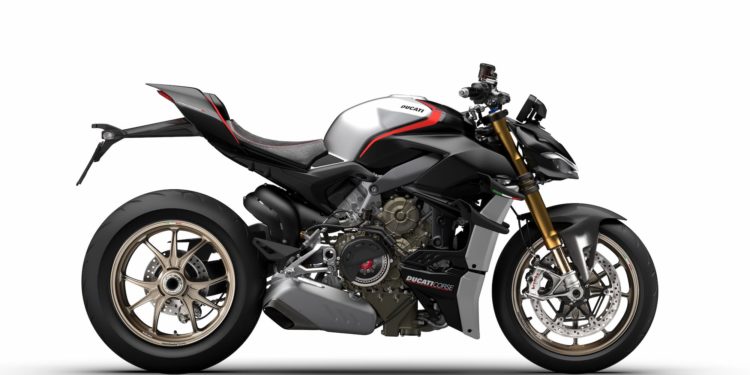 Introducing top-of-the-range Streetfighter V4 SP model, a precious gem in the Streetfighter universe, offered in a numbered version and marked with the legendary “SP” (which stands for Sport Production) abbreviation. The new Streetfighter V4 SP is the most adrenaline-pumping naked to ever roll its wheels off the production line in Borgo Panigale. This is thanks to a special technical equipment that perfectly combines the “Fight Formula” with the “SP” specifications, further improving the power-to-weight ratio of the Streetfighter V4 S, which was already at the top of its category, and making the bike even more effective on the track.

“The Streetfighter V4 SP takes the naked motorcycle game up a notch with its mad “Fight Formula” combined with the weight savings that come with the SP moniker. We’re glad to be expanding the Streetfighter family in India with the all-new Streetfighter V4 SP that is the most exhilarating sport naked on sale in India today. It’s one distinct machine thanks to the exclusive “Winter Test” livery and we’re eagerly waiting to see how the Ducatisti in India make do with the full potential of this rare bike, out on the racetrack and beyond.”

The essential and captivating “Winter Test” livery has been conceived by the Ducati Centro Stile taking inspiration from the Ducati Corse motorcycles ridden in MotoGP and SBK Championships pre-season tests. The Matte Black of the fairings combined with the Matte Carbon finish of wings, superbly contrasts with the bright red accents and the sparkling brushed aluminium tank. The new born from Borgo Panigale is also enriched with some beautiful details, such as the progressive number printed on the handlebar and the Italian flag colour scheme on the carbon wings.

The Streetfighter V4 SP is equipped with Marchesini forged magnesium wheels, 0.9 kg lighter than the forged aluminium ones fitted as standard on the Streetfighter V4 S and capable of reducing the inertia by 26% at the front and 46% at the rear, making the bike significantly more agile and lighter when changing direction. The exclusive Brembo Stylema R® front brake callipers guarantee uncommon braking power, as well as stunning performance even during extended use on track.

The new bike is equipped with the Öhlins Smart EC 2.0 with the event-based system that can vary the damping according to the rider’s riding style, and together with biplane wings they increase confidence and ensure the best performance in sporty use.

The beating heart is the 1,103 cc Desmosedici Stradale with 208 hp capable of delivering a torque of 123 Nm at 9,500 rpm. On the Streetfighter V4 SP, the Desmosedici Stradale is fitted with the STM-EVO SBK dry clutch, which guarantees a better anti-hopping function even in the most aggressive downshifts and greater fluidity during all “off-throttle” stages, a crucial aspect to be truly effective on the track when pushing to the limit.

The equipment of this unique bike is enriched by the adjustable aluminium and CNC machined foot pegs, the carbon front mudguard, the lithium-ion battery, and a range of Ducati accessories suitable for the “track days”, such as the open carbon clutch cover** and the caps for removing the license plate holder**.

Thanks to its technical equipment, the Streetfighter V4 SP is the ideal companion even for a beginner who wants to rule the track riding a naked bike and get an instant response. The bike is easier to lay into the corner and gets to the apex faster, not to mention there’s great stability at high speeds.

The new Streetfighter V4 SP comes with the minimalistic “Winter Test” livery which is Ducati Corse-inspired, those ridden in MotoGP and SBK Championships pre-season tests.

The total black effect derived from the matt black of the fairings superbly contrasts with the brushed aluminium tank, while the bright red accents that mark the tail, tank and front fairing recall the classic Ducati Red. The specific saddle is customised with the “V4 SP” logo while the carbon wings are embellished with the Italian flag colour scheme which also stands out on the Panigale V4 R SBK.

The racing flavour is emphasized by the removal of the license plate holder and the assembly of specific covers to close the holes. These covers are available with the bike.

The Streetfighter V4 SP is powered by the 1,103 cm³ Desmosedici Stradale, compliant with the Euro 5 regulation: 90°-V4 layout engine with Desmodromic distribution MotoGP-derived, featuring rare gems as the counter rotating crankshaft and “Twin Pulse” firing order. The engine delivers 208 hp at 13,000 rpm and a torque of 123 Nm at 9,500 rpm.

The 90°-V4 layout engine features a 9-disc STM EVO-SBK dry clutch, made of machined aluminium. Compared to the wet clutch of the Streetfighter V4 S, in the extreme use on the track, the dry clutch guarantees a more effective anti-hopping function, even in the most aggressive downshifts, and greater fluidity in all phases of “off throttle”, as well as the opportunity to customise the “mechanical” engine brake level, by choosing a different secondary spring from those available in the extensive Ducati Performance catalogue. The assembly of the open clutch cover made of carbon fiber, included in the kit, gives the classic metallic sound which appealed to thousands of Ducatisti.

The Streetfighter V4 SP stands out for being equipped with high-quality Marchesini forged magnesium wheels for better stability.

It allows for a weight saving of 0.9 kg compared to the forged aluminium wheels of the Streetfighter V4 S; more over this figure is further improved with 2.9 kg drop in weight. The result? A significant reduction of moment of inertia, which provide for an increased agility and lightness when changing direction.

The braking system consists of two 330 mm diameter Brembo discs at the front combined with new Brembo Stylema® R monobloc callipers, featuring racing-derived pistons equipped with ventilation holes, which improve the stability of the lever stroke even after numerous laps on the racetrack and further reduce the residual torque.

The rider’s footpegs are made of high-quality anodized aluminium alloy which maintains its original appearance. These appealing elements allow the rider to find the position that best suits his riding style. They have carbon fibre heel guards and brake and shift pedals to minimise the risk of breakage in the event of a slip. In addition, they are also designed to quickly switch between traditional and reverse shifting configurations.

The SP model shares its suspension components with the Streetfighter V4 S version; Öhlins NIX-30 fork, Öhlins TTX36 rear shock absorber and Öhlins steering damper controlled by the second generation Öhlins Smart EC 2.0 system. Unlike the S version, the new machine has the same Panigale V4 springs and hydraulic. The only difference is a fork spring preload reduced from 11mm to 6mm.

The latest-generation electronics package on the Streetfighter V4 SP is based on a 6-axis Inertial Unit (6D IMU – Inertial Measurement Unit) capable to instantaneously detect the bike’s roll, yaw, and pitch angle in space.

In addition, the electronics package includes controls to manage all riding phases, from the start to acceleration and braking, traction, through the corners and out:

Lastly, the operating parameters of each control are associated by default with the three Riding Modes. Bikers have therefore the opportunity to personalise their riding style or restore the Ducati settings. Any of the control levels, such as DTC, DWC, DSC or EBC, can be quickly adjusted via the left switch cube.

* Bike specifications and dealer availability may vary from market to market. Please refer to the tech specs on Ducati Media House for further information

** This product is intended for vehicles used only in closed-course circuit. Operation on public roads is prohibited by law