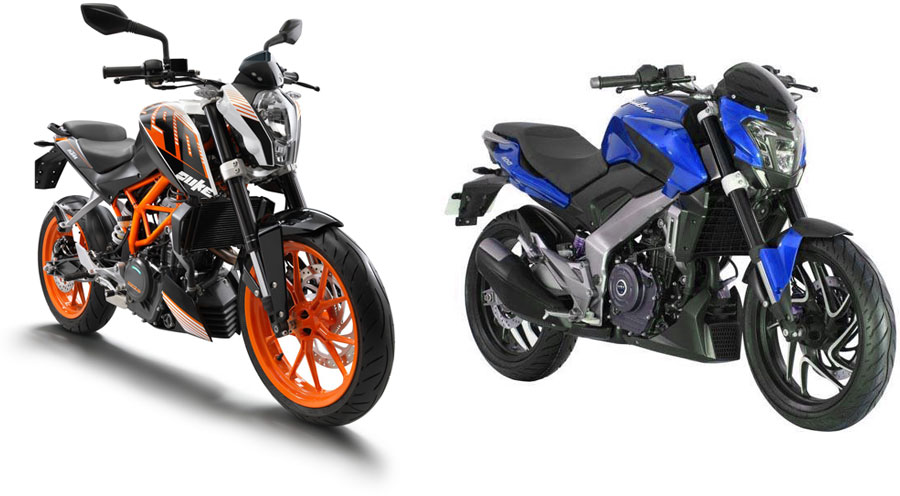 Bajaj Auto, the leading motorcycle manufacturers in the country will be launching their most expected 400cc motorcycle Pulsar VS400. Bajaj which is known for its pulsar range is now learning the business of manufacturing high performance motorcycles. Already popular among youth, the upcoming Pulsar VS400 could be the next big thing from Bajaj.

The upcoming Pulsar VS400 was initially called as CS400 which marks the start of new 400cc premium segment from Bajaj. The all new Bajaj Pulsar VS400 would be launching in coming days and will be potentially taking on its rival Duke 390 from Austrian bike maker KTM. We compare the specifications of Pulsar VS400 along with KTM Duke 390.

Bajaj Pulsar CS400 which is now known as VS400 was first showcased in its concept form at 2014 New Delhi Auto Expo.

When we look at the the design, the KTM Duke 390 looks wild in comparison with Bajaj Pulsar VS400. The Duke 390 has a naked look and gets a contrasting Orange-White-Black color that makes it look pretty aggressive. The other design aspects of Duke 390 include bold and large headlamp, sharply designed very muscular fuel tank, stepped up seat, and sleek tail section.

Duke 390 vs Pulsar VS400 Performance Comparison

The upcoming Bajaj Pulsar VS400 is powered by 373.2 cc single cylinder 4-valve liquid cooled fuel injected engine. The same 373.2cc engine has been used in KTM Duke 390 as well. Both KTM Duke 390 and Pulsar VS400’s engines are mated to a 6-speed gearbox.

Pulsar VS400 is undoubtedly very stylish and also gets a very aggressive looks. Pulsar VS400 could also be used for daily commuting even though it is built primarily as a sporty performance motorcycle. The brand Bajaj and brand Pulsar further adds upto the value of product.

Talking about the price, the Pulsar VS400 is available at a price tag in the range of INR 1.6 lakhs to 1.8 lakhs.
The Pulsar VS400 is a great choice for urban commuters who look for premium and sporty performance from their motorcycles.

In the other hand, KTM Duke 390 gets a very rugged look. The naked design of KTM Duke 390 is a perfect motorcycle for the one who is looking for adventure and sporty performance. When compared to upcoming Pulsar VS400, the existing KTM Duke 390 is pretty powerful.

The upcoming Pulsar VS400 would be priced at INR 1.9 lakh. This means KTM Duke 390 is a lot expensive than Pulsar VS400.

You can add to this story by commenting below: