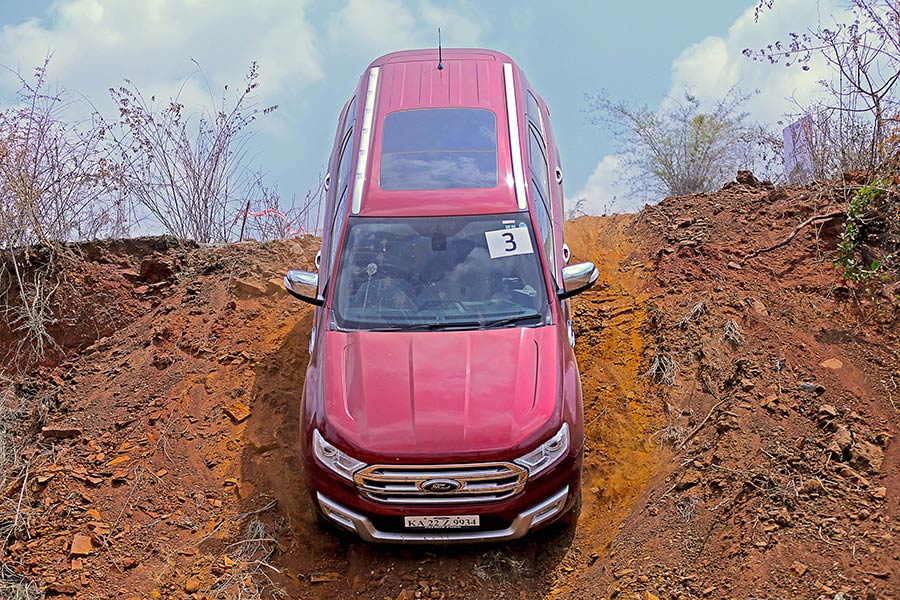 Since the time we drove the Tata Hexa at the Experience drive event in Bangalore, we were waiting for a similar thing to come up and then the invite for the Ford Endeavour off-road drive was received. But the catch was that the event was on a Sunday. But hey, we auto journalists and enthusiasts live for things like these and I didn’t think twice before I agreed to be there. But why are manufacturers coming up with events like these with such great facilities? The reason is to clearly show us what their SUV’s are really capable of. Its a thing they do to showcase what their SUV’s, otherwise driven 90% on the roads, are capable of doing off the tarmac. Ford Endeavour is one such SUV which Ford thinks can handle everything thrown at it and we were there to find out exactly that. 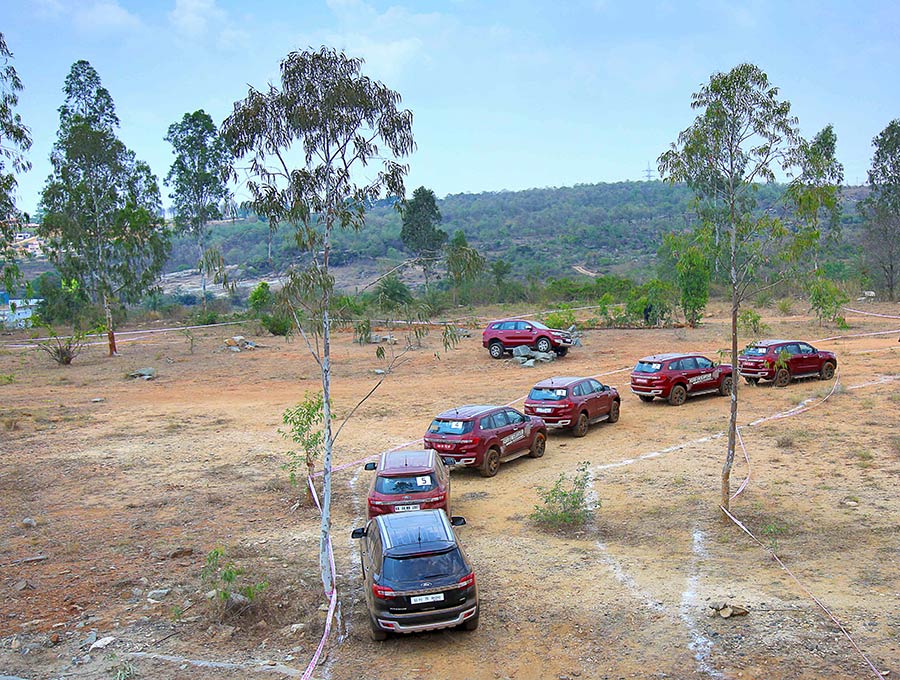 Ford Endeavour was launched last year as a straight competition to the much capable Toyota Fortuner. Endeavour comes with two engine options, a 4 cylinder 2.2 litre and a 5 cylinder 3.2 litre engine. The one we drove was the 5 cylinder, 3.2 litre engine making 200bhp of power and 470Nm of torque between 1700-2500 rpm mated to a 6-speed automatic transmission. The Endeavour comes with 4 driving modes, normal, snow/mud/grass, sand and rock mode which are a part of the terrain management system from Ford. What is also gets is the hill descent control, electronically locking rear differential and torque on demand via active transfer case. How do you select all of the mentioned controls you ask? With just a turn of the dial, I say. 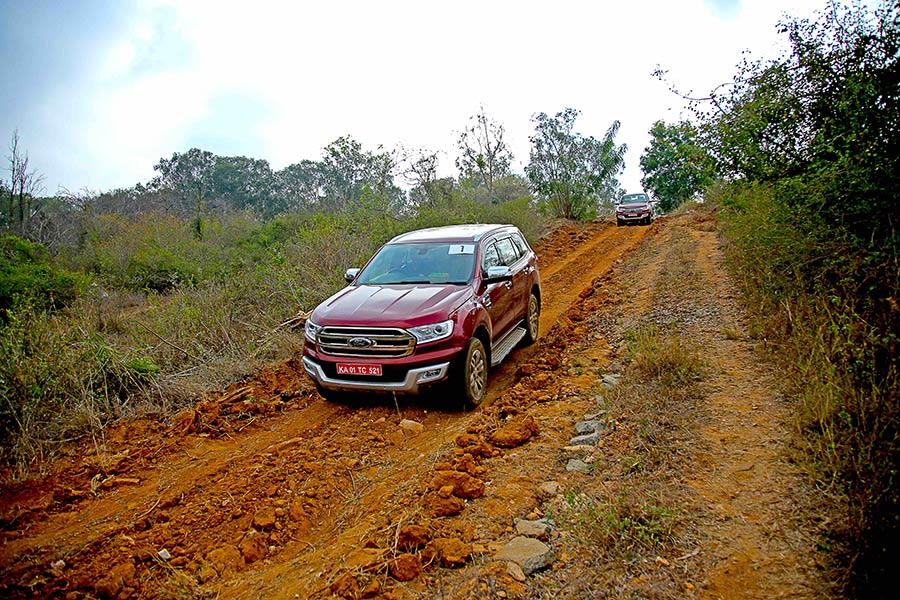 Having learnt all that, it was now time to actually put all of these to use and see how well the Endeavour overcomes obstacles. The first obstacle was the slush and to easily drive past that, I had to turn the dial into slush mode and gently press on the throttle and the Endeavour would effortlessly take me on the other side. Trust me, it did it as effortlessly as I have explained. After a few small hill climbs and maneuvers across the track, it was time to test the Endeavour on a 35 degree sloped bank. I was instructed to stop, shift it to neutral, engage rock mode, turn on 4×4 low, shift it back to drive and continue. What the 4×4 low does is that it shifts into the lowest gear in the gearbox for impressive low end torque to take you through whatever lies ahead.  Next I know is that we are 28 degrees on the sloped bank and the Endeavour took us through it without a glitch. 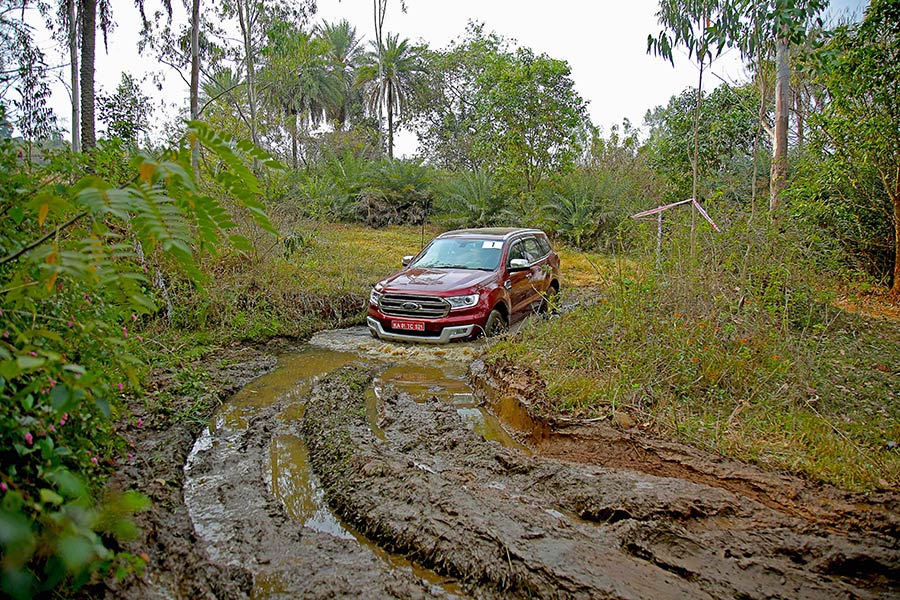 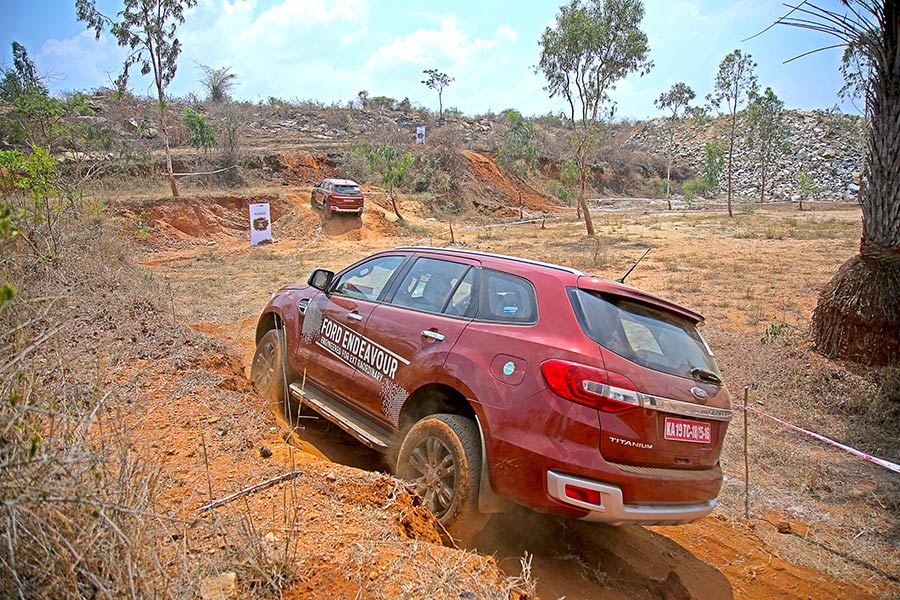 Already impressed with what the Endeavour could do, we moved forward. Then came a steep down hill which I was confident the Endeavour could handle by turning on the hill descent control. This control literally controls everything except your steering inputs when you are downhill. I was asked to take my foot off the brake pedal. Taking my foot off the brake pedal on a downhill? Are you serious? What the hill descent control does is that it intelligently works the ABS to easily descent you downhill keeping the power at minimum. Its a human thing to reach for the brake no matter who tells you what or what the electronics does, but the Endeavour took care of us quite brilliantly. 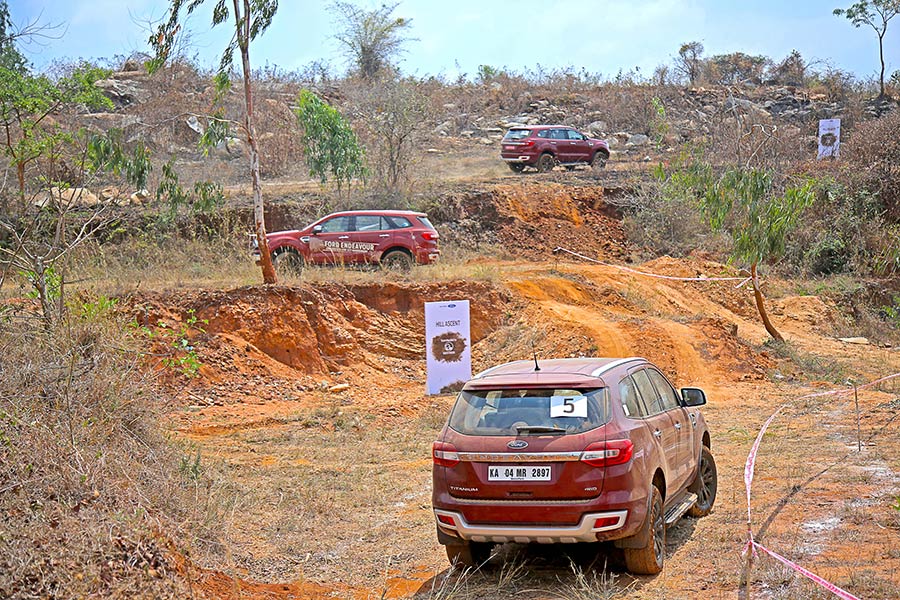 Biggest obstacle of day was up ahead. A 70 degree downhill slope which the Endeavour had to overcome to pass the ultimate SUV test. For this we had to engage rock mode, 4×4 low and hill descent control. How bad a slope was that? How did the Endeavour tackle it? I’ll let the pictures talk here. 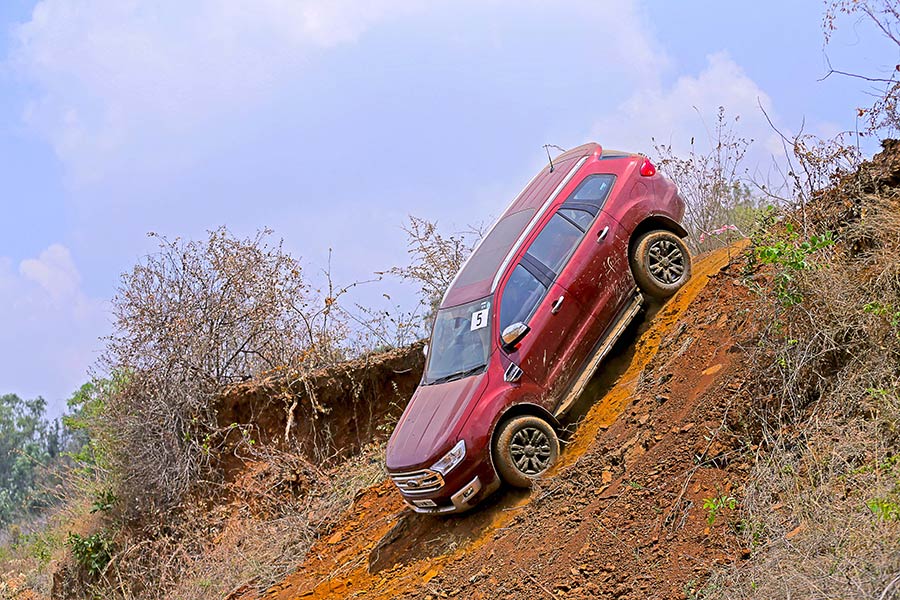 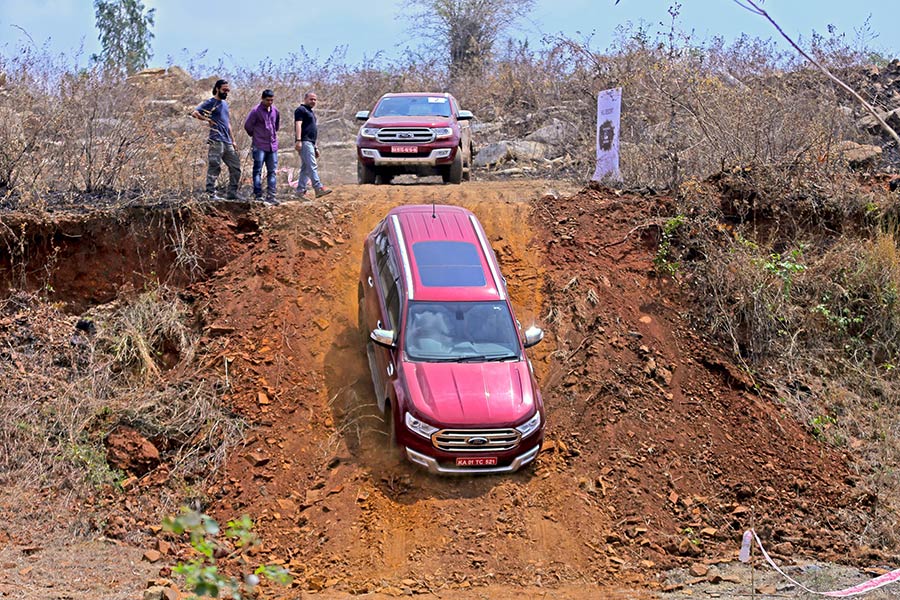 The track also sported a slight on road condition on an off-road track. Driving through almost a foot deep ditches tested the SUV’s suspension and we had to continue ahead with the rock mode control engaged. The soft suspension treated us well while the throttle inputs were controlled. This comes to say that the pot holes on our roads can and will be handled well by the Endeavour given the shapes and sizes of pot holes we find in India.  This supposedly was the last obstacle for the mighty SUV and we were back to the camp, impressed and smiling. Its something about off-roading that makes you smile. SUV’s are cars that are capable of taking you only where the mind tends to lurk. Experiencing such capable off-roaders in the present world is something to be happy about. 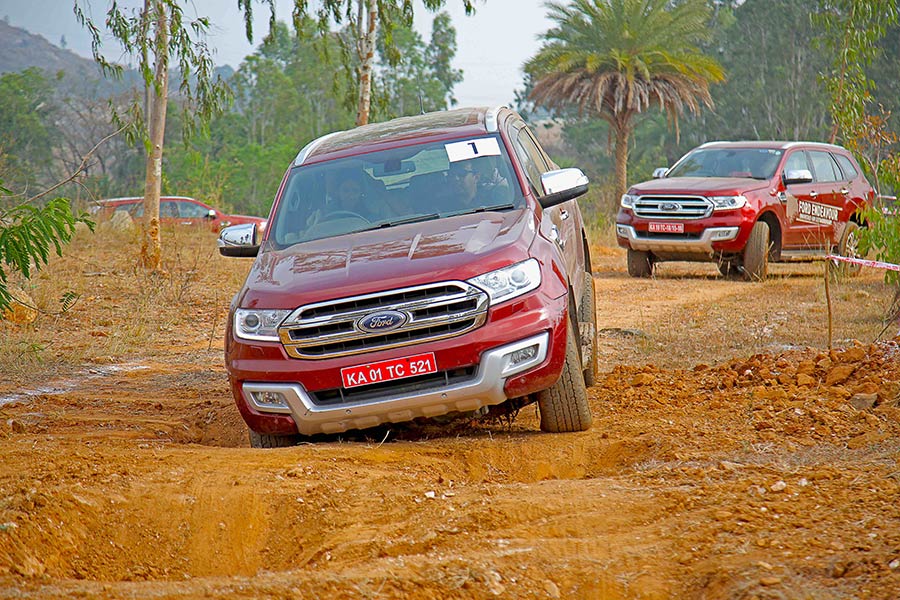 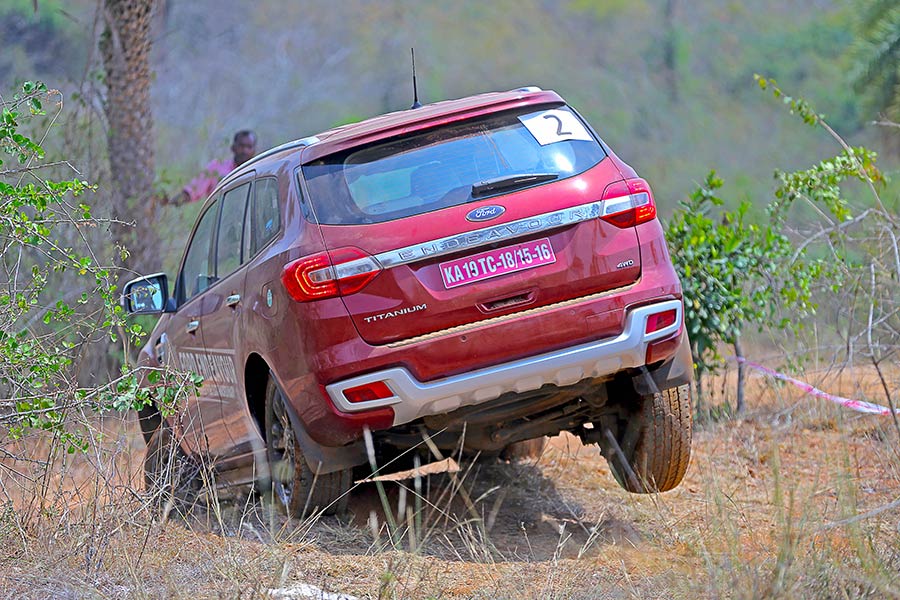 Ford’s engineer, who was one of the persons responsible for the development of the Endeavour was our instructor. He might not express it but the joy of seeing the capabilities of what he and his team had developed should definitely overwhelm him. Ford Endeavour is priced at Rs 31.50 lakh ex-showroom Bangalore and it is a really capable SUV. It’s off-road capabilities are top work and a very neat and an effortless SUV to drive in. It really does justice to the price tag with a lot on offer. If you’re someone who takes it on and off-road regularly and are comfortable with the price tag then the Ford Endeavour is more than capable of everything you need it to do. 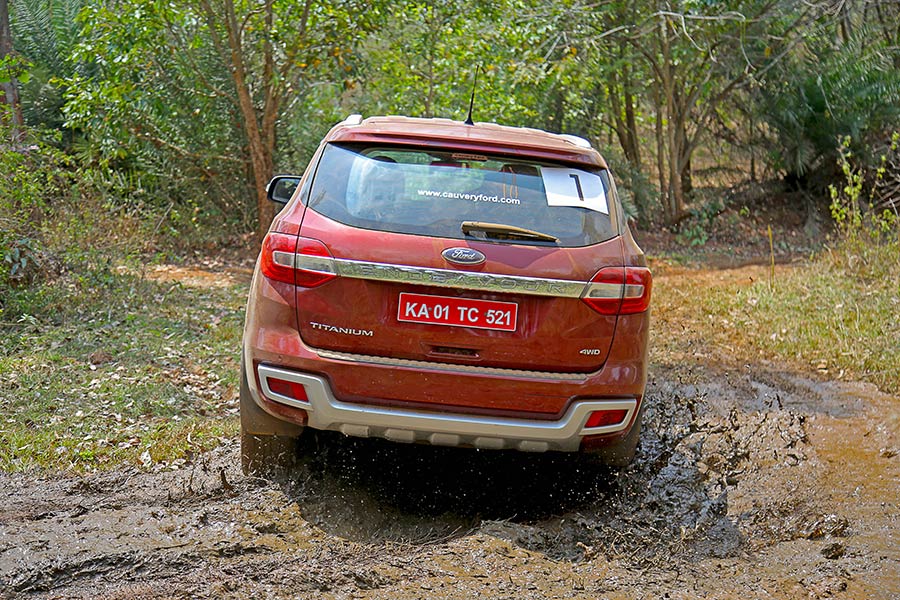