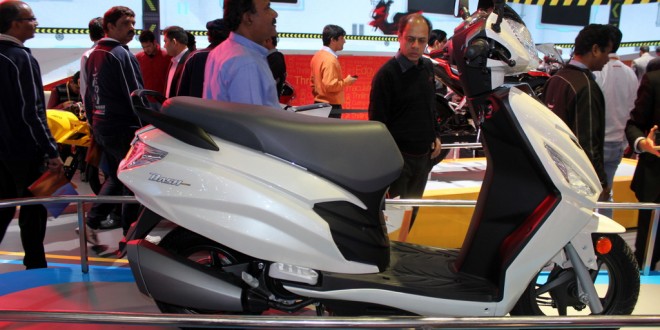 India’s leading bike manufacturer Hero MotoCorp’s much rumoured and awaited scooter – Hero Dash is expected to be launched before October 15 this year reported ShiftingGears magazine. Officials at Hero MotoCorp has confirmed that this new Hero scooter shall be unveiled within 2 months time such that it falls on dates of festive season in India.

Hero Dash scooter was spotted testing on the Indian streets many times and was first revealed at Indian Auto Expo held in 2014. The Hero Dash scooter is going to be manufactured at Hero MotoCorp’s production facility which is at Gurgaon.

Hero MotoCorp’s Dash is expected to be launched in two different variants – Hero Dash Lx & Hero Dash Vx. The available colors for Honda Dash has not been made official yet. From what we see in the scooter image, the white colored Hero Dash is confirmed.

From what we know so far, Hero MotoCorp’s Hero Dash is going to be Powered by a 111cc, 4-stroke, force-air-cooled, single-cylinder petrol engine which gives 8.5 BHP of power. Hero Dash engine is mated to a CVT gearbox.

When launched officially by October, the bike’s sticker name is expected to be Hero Duet or Hero Specter.

[…] in this week, we reported that Honda Dash Scooter would be launched before October 15. While the news which we reported is true, there is a change in the name of the supposed to be […]