Hero MotoSports Team Rally, the rally racing team of Hero MotoCorp - world’s largest two-wheeler manufacturer, is charged-up up for its fourth consecutive appearance at the world’s most grueling and competitive rally raid - The Dakar Rally. 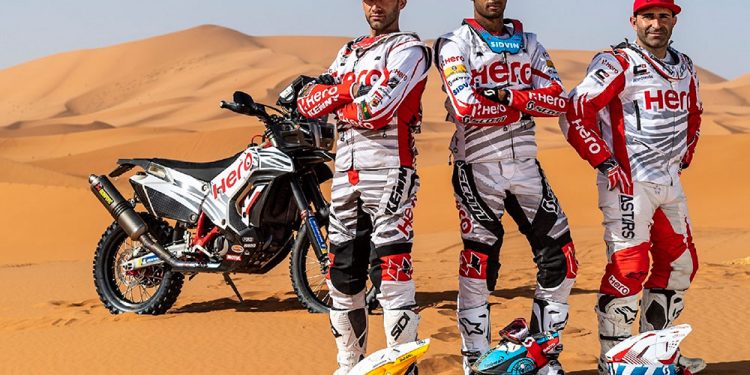 Hero MotoSports Team Rally, the rally racing team of Hero MotoCorp – world’s largest two-wheeler manufacturer, is charged-up up for its fourth consecutive appearance at the world’s most grueling and competitive rally raid – The Dakar Rally.

The Team has arrived in Jeddah, Saudi Arabia, which will be the starting point for the Dakar 2020.

Buhler replaces the consistent performer Oriol Mena, who unfortunately further aggravated an existing injury, ruling him out of Dakar 2020. Oriol finished 2018 and 2019 editions of the Dakar with Top-10 finishes and was the ‘Rookie of the Year’ during Dakar 2018. To fill-in his spot, Team management decided to rope in the promising Sebastian Buhler – who has been training under the Hero MotoSports’ rider development program.

Buhler, 25, is from Germany and this will be his second attempt at the Dakar, after an impressive Top-20 finish during his debut attempt in 2019, as an independent participant. In a short career span of six years, Buhler has won four titles and secured 45 podium finishes.

Commencing in Jeddah on January 5, 2020, the 42nd edition of the Dakar Rally will conclude 12-stages later in Qiddiyah near the country’s capital of Riyadh. The competitors will battle over 5,000 kms of special stages, covering an overall distance of nearly 7,900 kms. In addition to discovering the Saudi Arabian dunes in the second half of the Rally, the first half will take the competitors through a labyrinth of tracks where navigation-skills will be essential.

The Hero MotoSports Team Rally is currently going over its final stretch of preparations ahead of the ceremonial flag-off on January 4, 2020.

“We are excited to be at the Dakar Rally for the fourth consecutive year. It’s a bittersweet moment for us though – while we have the Champ, Paulo joining us this year at Dakar, Oriol will miss out as his recovery from the injuries is still not adequate for competitive racing. We are constantly working towards shaping young talent and it is a delight to have the promising young rider, Sebastian join the team as the fourth rider in the Rally. We have had the most successful ‘Road to Dakar’ campaign this year and are fully prepared for the upcoming Dakar.”

“I am looking forward to the Dakar and feel confident with the good results we have achieved this year. I have been training hard throughout the year with an aim to advance my performance and fitness levels. We are a team of talented competitors and hopefully, we will deliver impressive results this year again.”

“This is my first Dakar with Hero MotoSports and I am extremely excited. We have had an eventful past few months and my earlier outings with the team have been very promising. I look forward to supporting the growth of this young and impressive Team.”

“I am very excited to be racing at the Dakar again and I’m hoping to give my best. We have had a good run-up to this year’s Dakar. The preparations have been thorough and we are extremely motivated for the Rally.”

“It is a great opportunity for me to be a part of Hero MotoSports Team Rally in Dakar 2020. I have been preparing extensively and have already trained on the bike, so I think I’m well prepared for this big challenge. I’m glad to be a part of this team. It’s sad that Oriol could not be fit in time for the Dakar.”

In 2019 the Team stepped-up its game with a Rally win (Pan Africa Rally), two Podium finishes (Merzouga and Desert Storm), four stage wins (1 in Silkway Rally, 2 in Pan Africa and 1 in Rally Du Maroc where Paulo won an important stage against all the top riders in the sport) and six stage podiums (Silkway Rally).

Hero MotoSports Team Rally has become a flag-bearer of Indian motorsports on the global arena.